I managed only one kayaking excursion in September on Mamit Lake, near my home at Logan Lake town – on the 2nd of the month. As is usual for early fall, the lake had abundant waterfowl and shorebirds. In total I recorded 44 species of birds while paddling the lake perimeter – about 8 km. A highlight was to see a young river otter – but it was too quick for me to get a photo. Loads of migrating Yellow-rumped Warblers were in the bushes around the lake and these had attracted a Merlin and a Sharp-shinned Hawk. 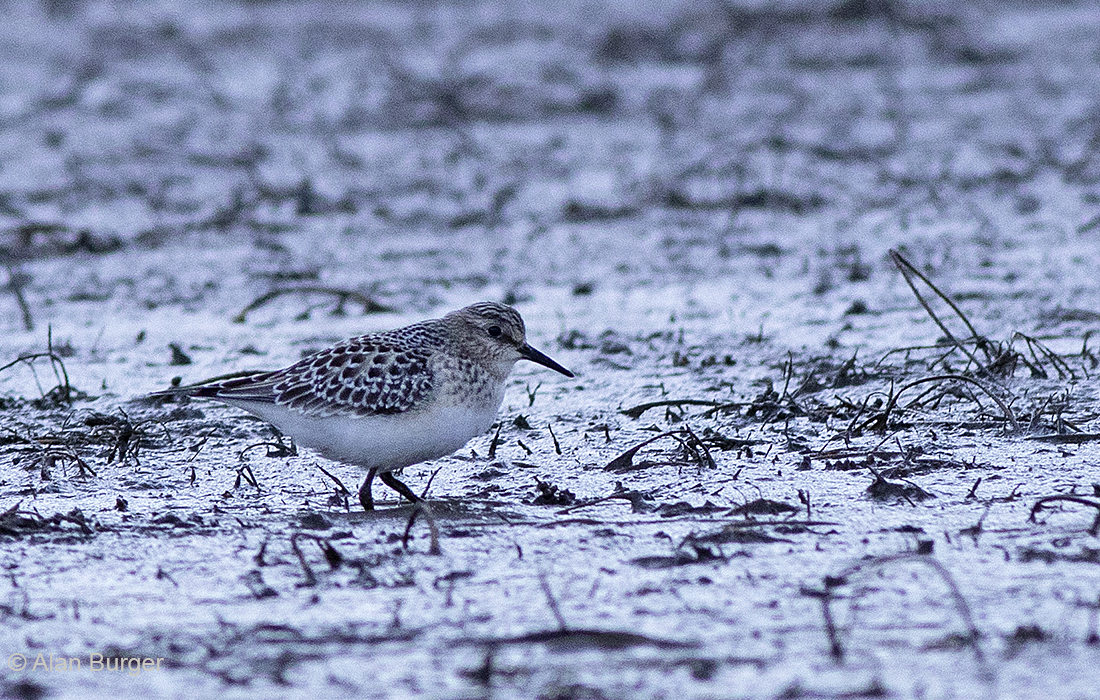 Baird’s Sandpiper is a relatively uncommon species passing through the southern interior of BC. Mamit Lake usually attracts one or two in late summer or early fall. Black legs, shortish pointed beak, long wings and scalloped back plumage are diagnostic features. 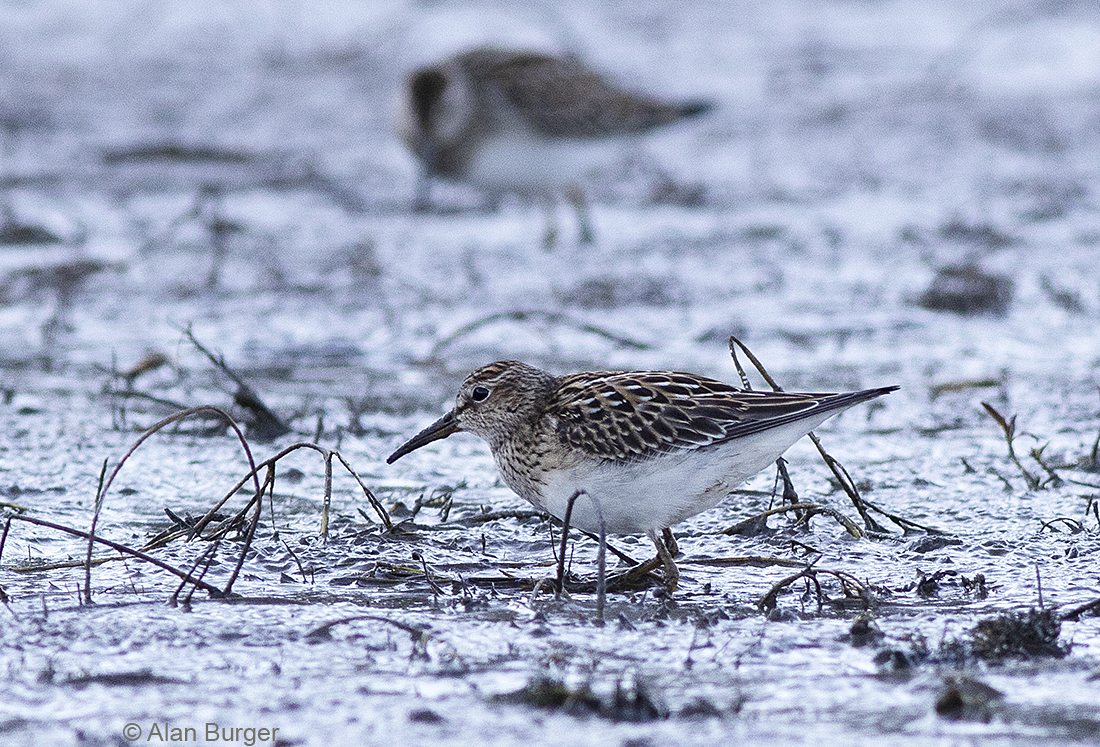 One of a small flock of Pectoral Sandpipers on 2nd September 2021. 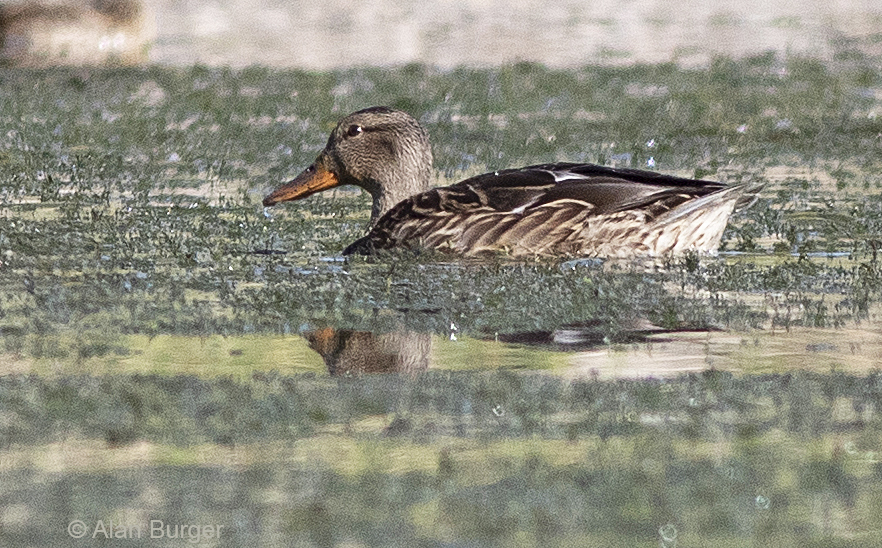 Mallards are generally the most common duck on Mamit Lake at any time of year. This is a female. 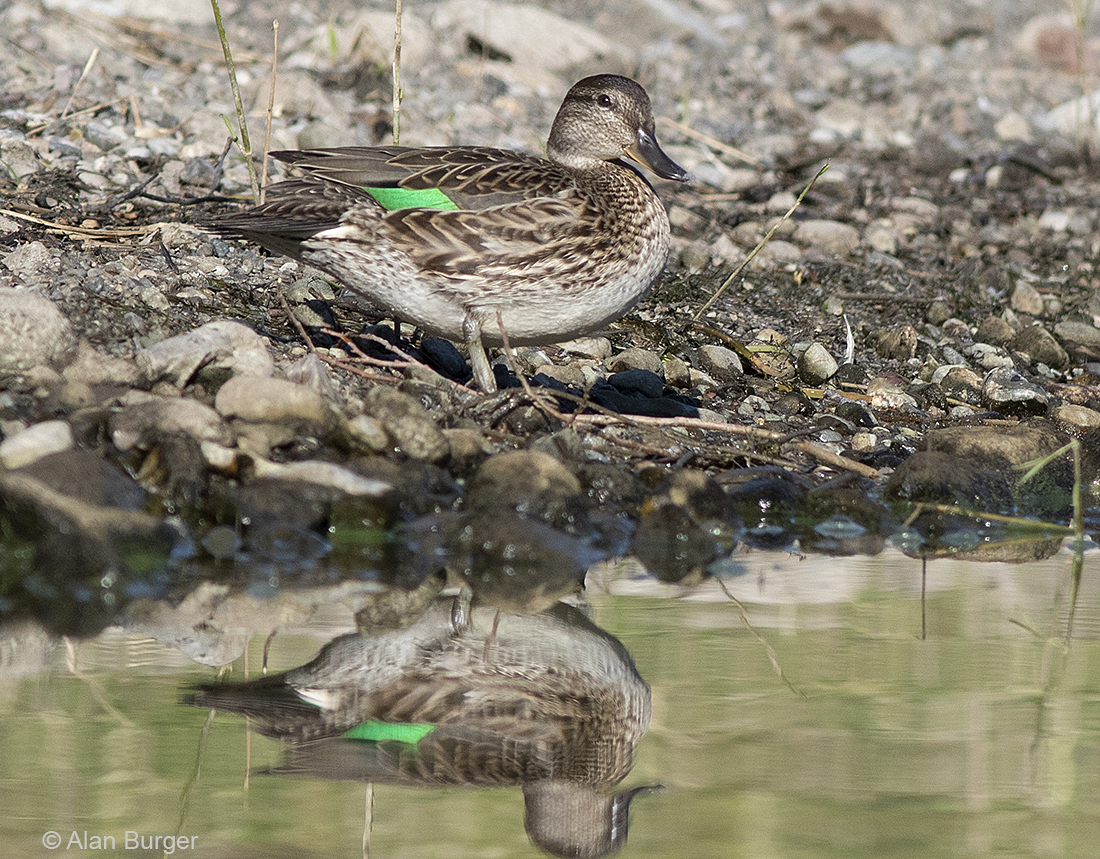 Greenwinged Teal are also abundant on Mamit Lake. At least 60 were present on 2 September 2021. 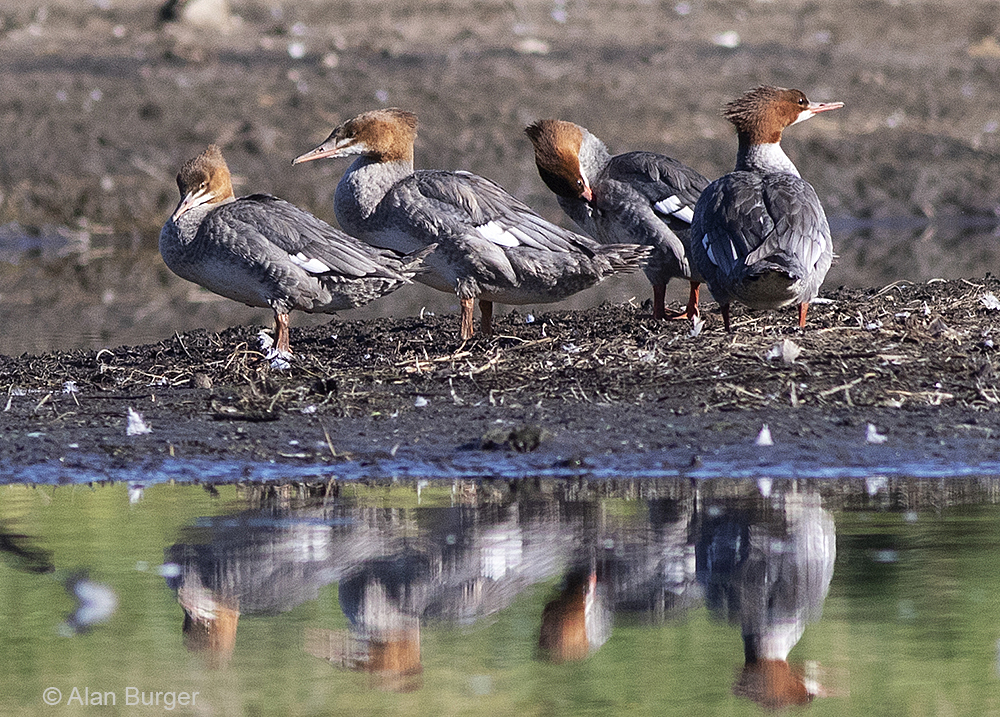 These four Common Mergansers were the only ones seen on Mamit Lake on 2 September – but in the weeks that followed many more arrived here. 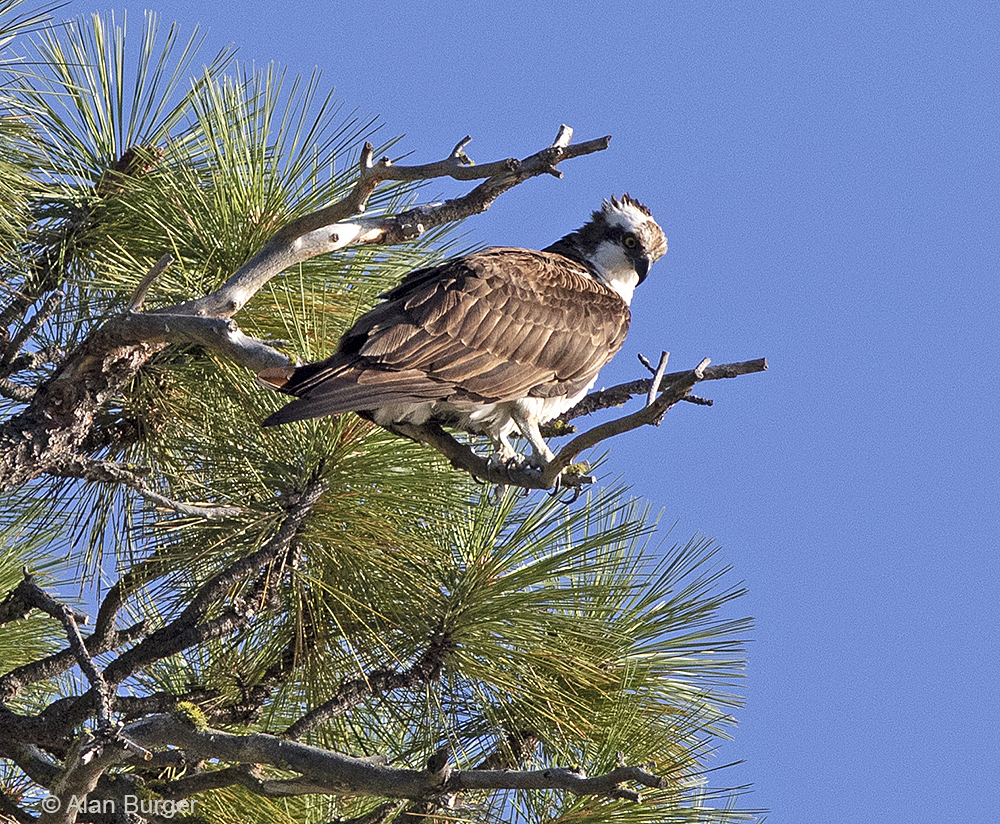 One of the summer-resident Ospreys. There are usually 2-5 of these fish-eating raptors at the lake. 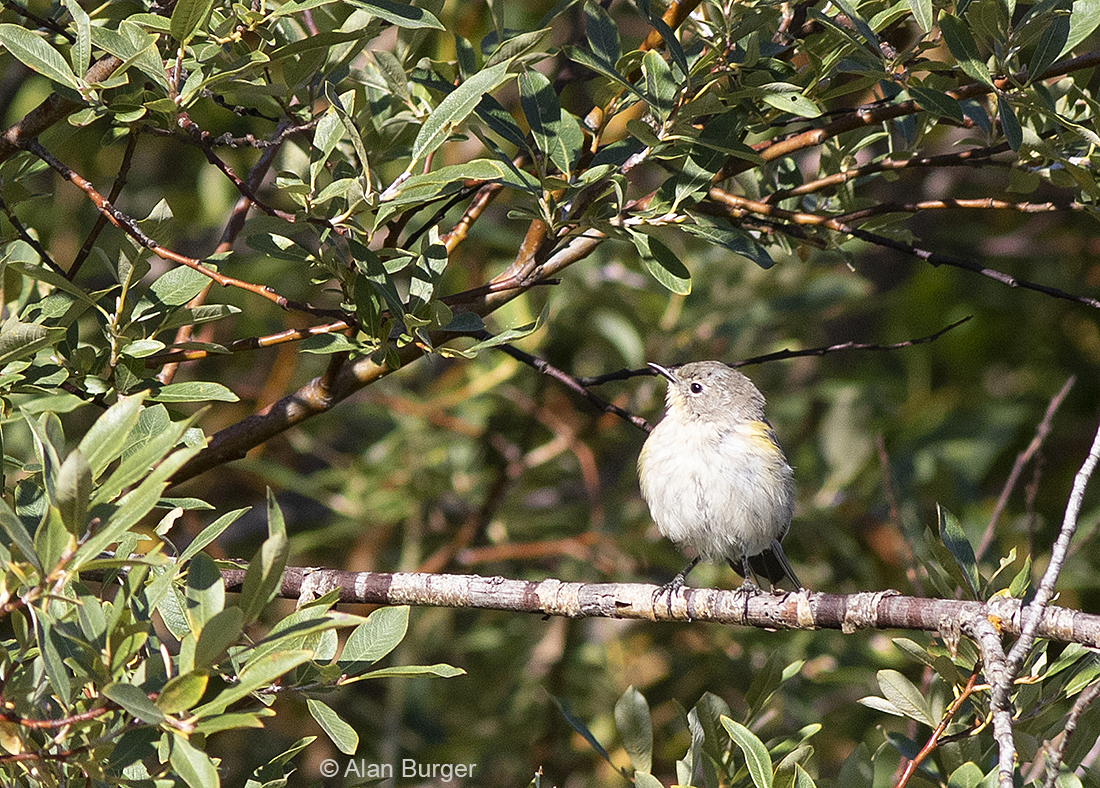 Dozens of migrating Yellow-rumped Warblers were in the bushes around the lake in early September. They are hard to photograph from a kayak as they rapidly flit around catching small insects.

Fully 6 weeks passed before I was out on the water on Mamit Lake again. During that time we had a solid dose of early winter, with low temperatures (overnight below freezing for most of early October and down to -12C one morning), rain, snow and almost constant wind. Not conducive to kayaking on an open lake. But on 18 October, in the midst of a spell of calm warmer weather, I had a wonderful morning on the lake, with glorious fall colours, lots of interesting birds and flat calm conditions. 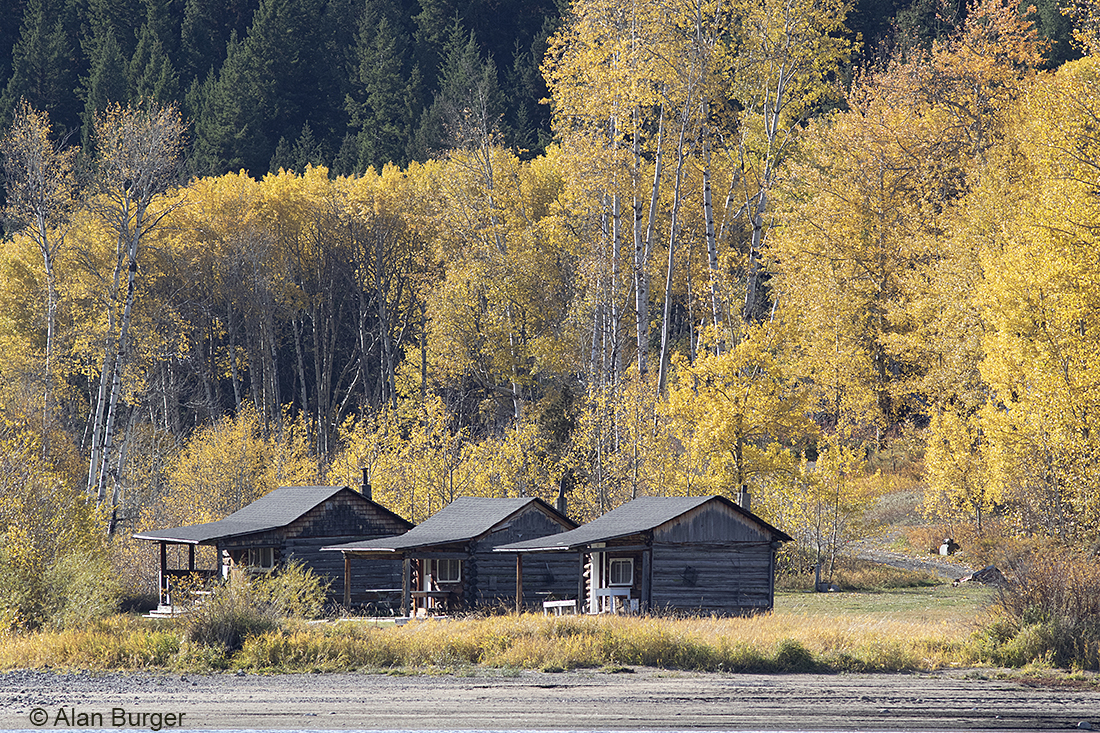 There were fewer of the usual ducks and almost no Canada Geese (only 3), but instead there were some unusual species of waterbirds. A flock of 18 Snow Geese took off from the hayfield next to the lake and circled overhead. At this time of year in the southern interior of BC one sometimes sees one or two Snow Geese among the Canada Geese, but 18 is highly unusual. 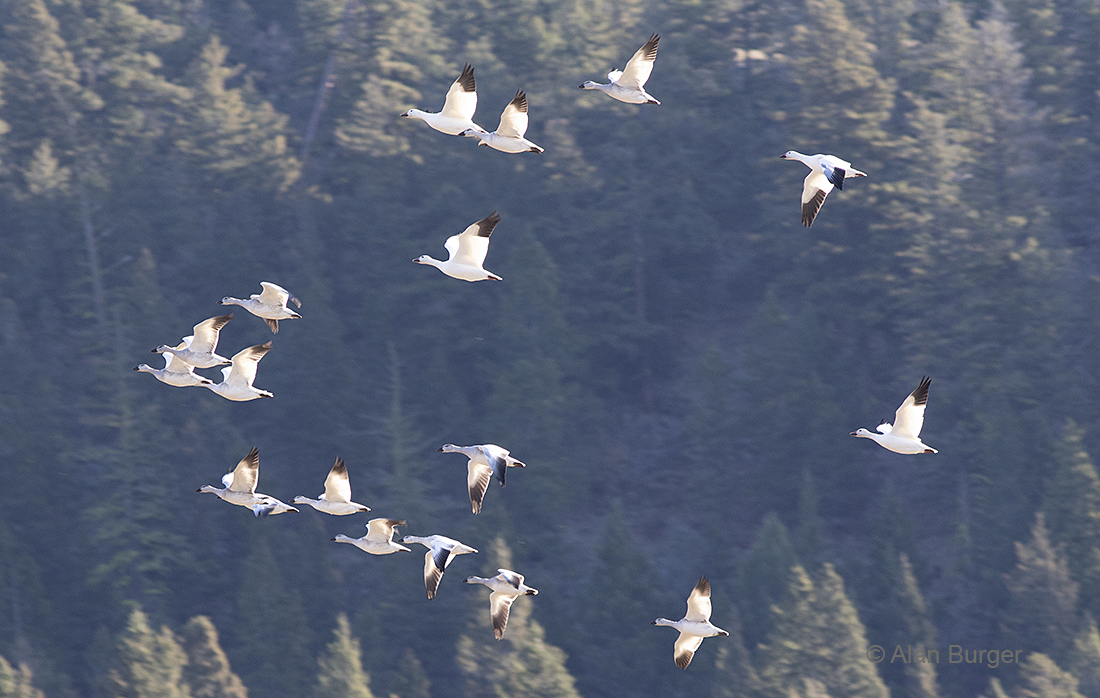 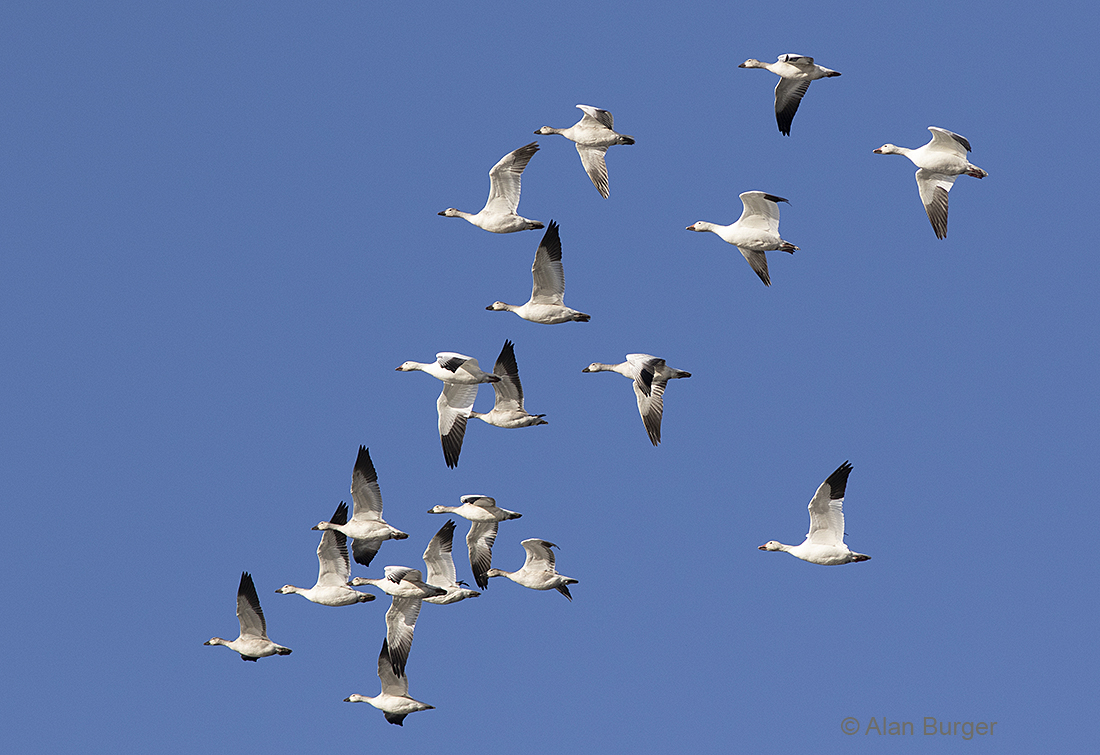 Snow Geese circling over Mamit Lake. Look closely and you can see that several are juvenile birds with slightly duller plumage and black instead of pink beaks. © Alan Burger

Another somewhat unexpected bird was a Surf Scoter. They are, of course, super abundant on the coast of B.C., but much less so in the interior. This was my first record on Mamit Lake. 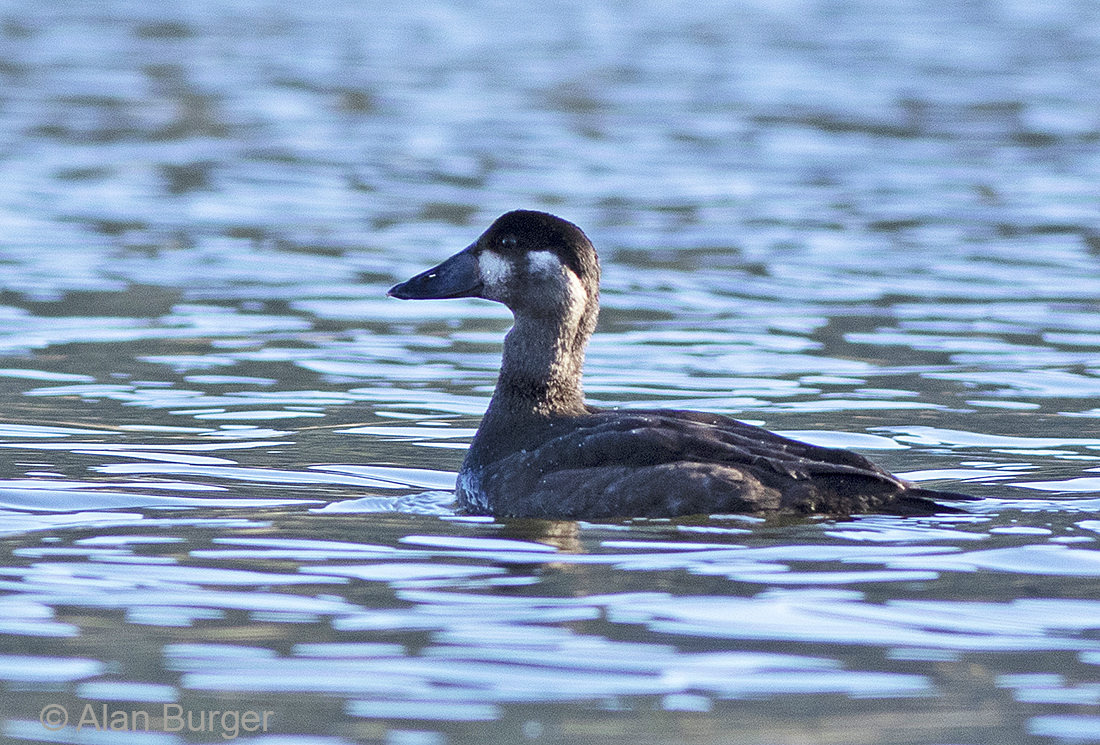 Other somewhat unusual waterbirds that were on the lake were the grebes – at the end of the morning I had tallied 12 Red-necked Grebes, 11 Horned Grebes, 4 Western Grebes and 1 Eared Grebe. These last two species were the first I’d seen on this lake. Having Western Grebes here was a special treat – I was able to drift up slowly to within photo range of these elegant birds. 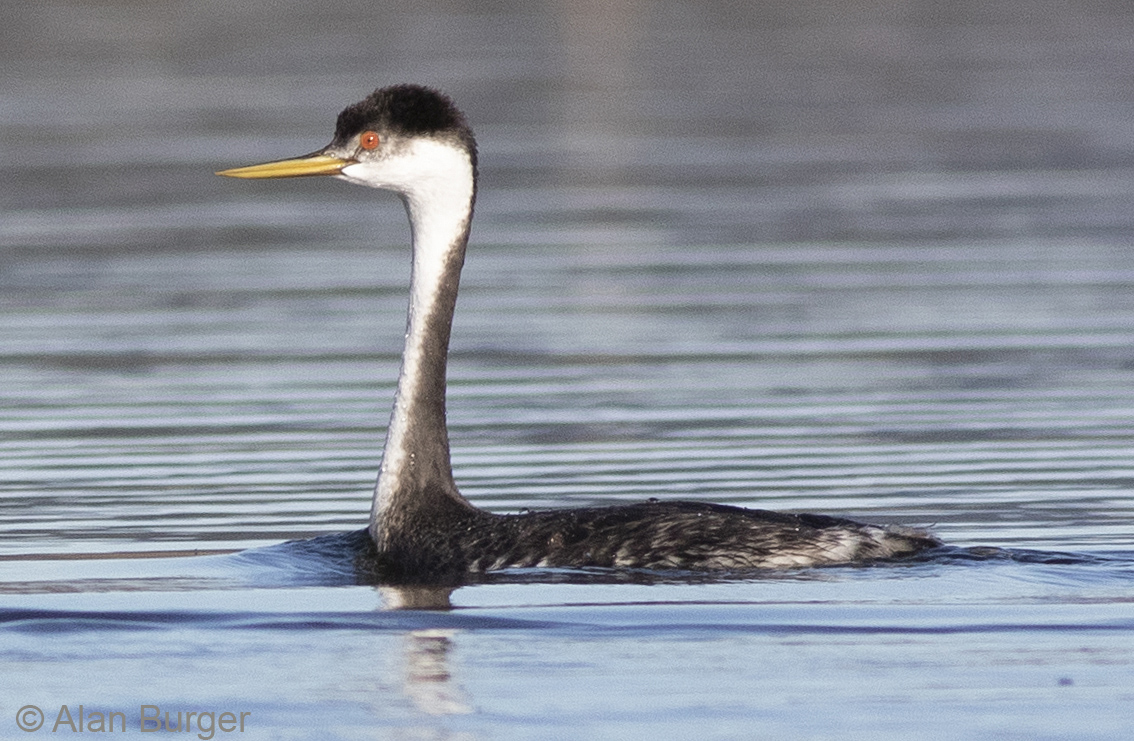 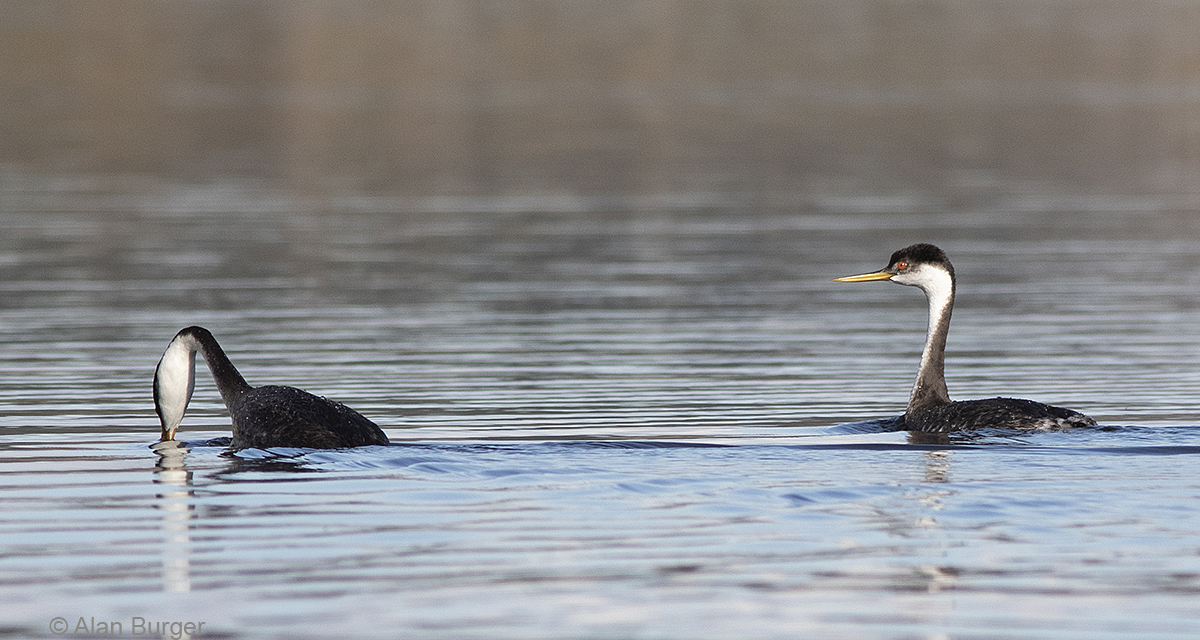 Western Grebes – the one on the left is in the act of diving. © Alan Burger

And yet another uncommon species – a lone adult Bonaparte’s Gull already in its winter plumage. 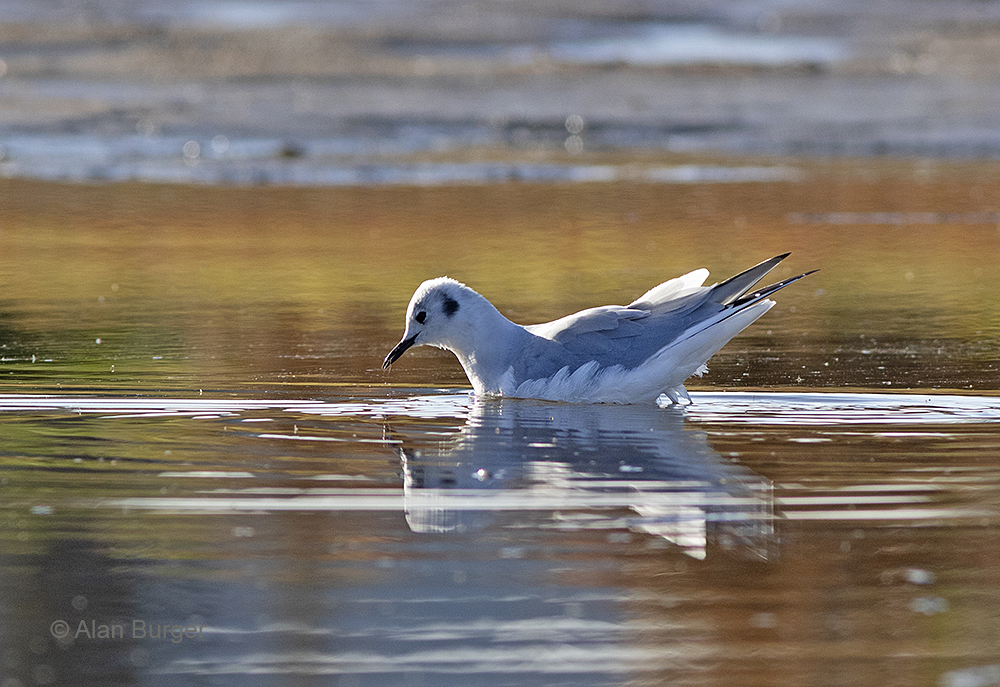 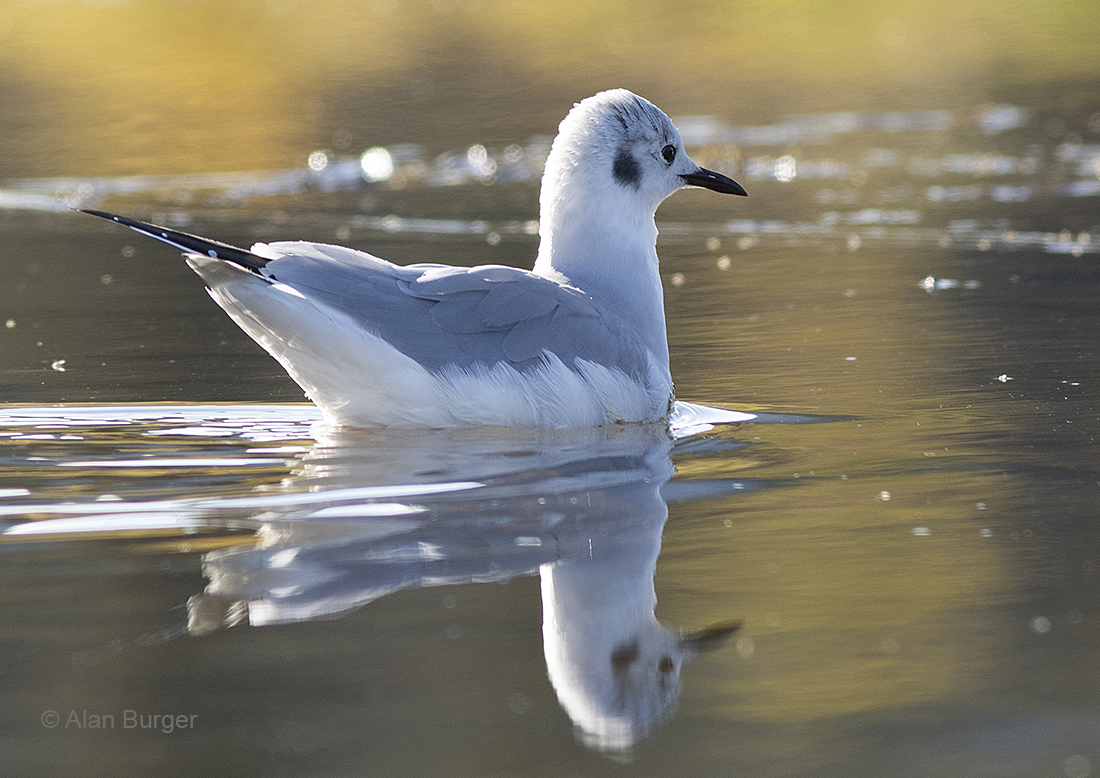 And dominating the waterbird numbers on 18 October were Common Mergansers. I estimated at least 180 of them – all either females, immatures or males in eclipse plumage. There were no males in alternate (breeding) plumage. Seeing a flock of over 100 mergansers taking off is a thrilling sight. Many smaller flocks were sitting on the shoreline or feeding out on the lake.

Common Mergansers resting on the shore of Mamit Lake, 18 October 2021. 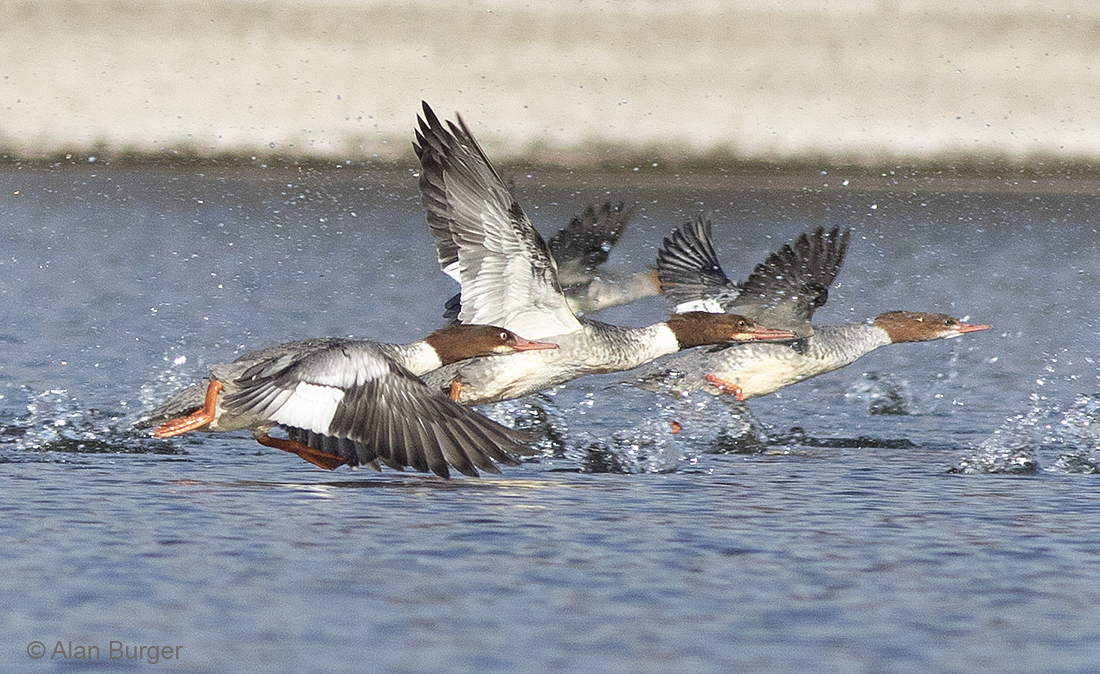 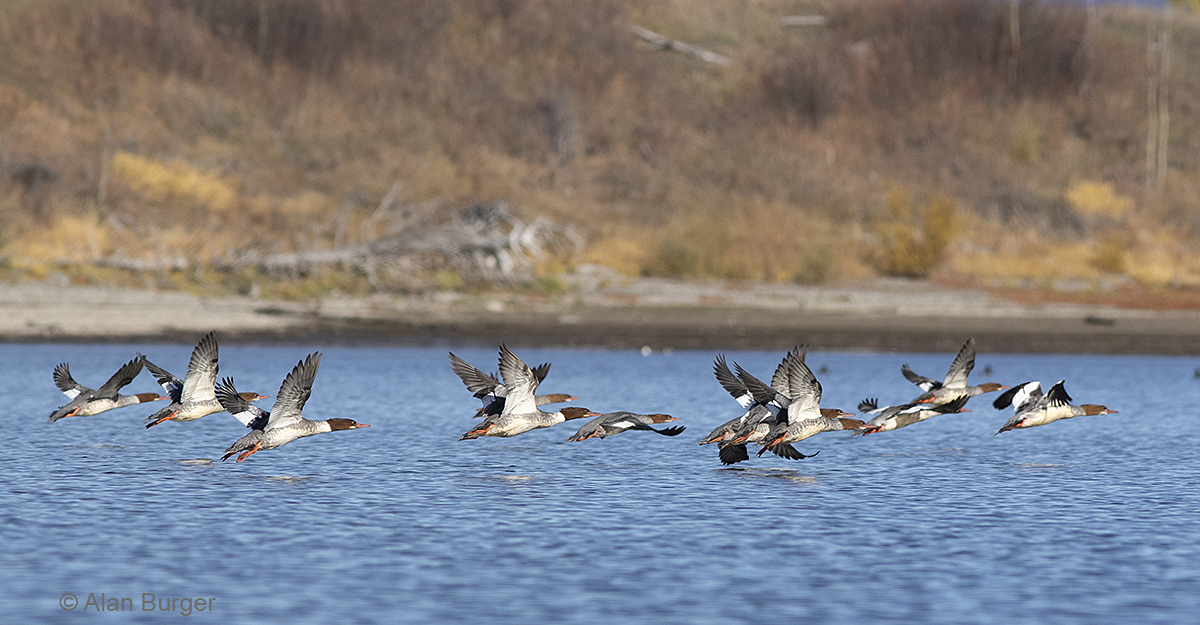 A passing Bald Eagle put this flock of Common Mergansers to flight.

A pair of Common Loons generally breeds on Mamit Lake, but in fall others use the lake as a migratory stop-over. On 18 October there were four immature and one adult on the lake. 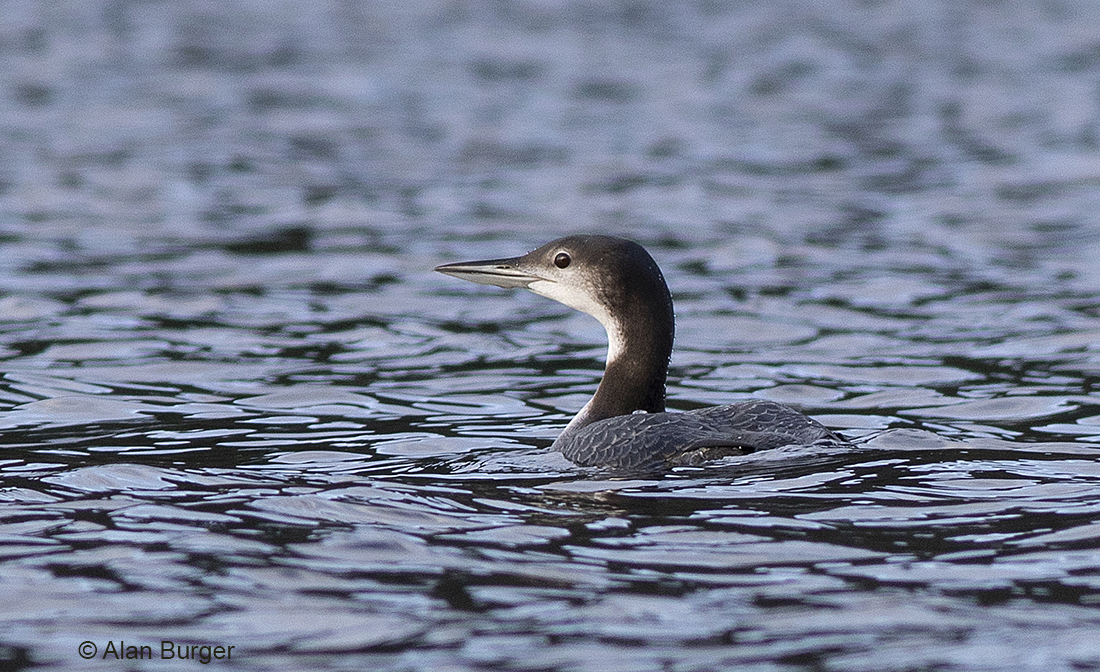 The shorebirds that are a feature of this lake in late summer and early fall had nearly all moved on. The only shorebirds seen were two Long-billed Dowitchers. 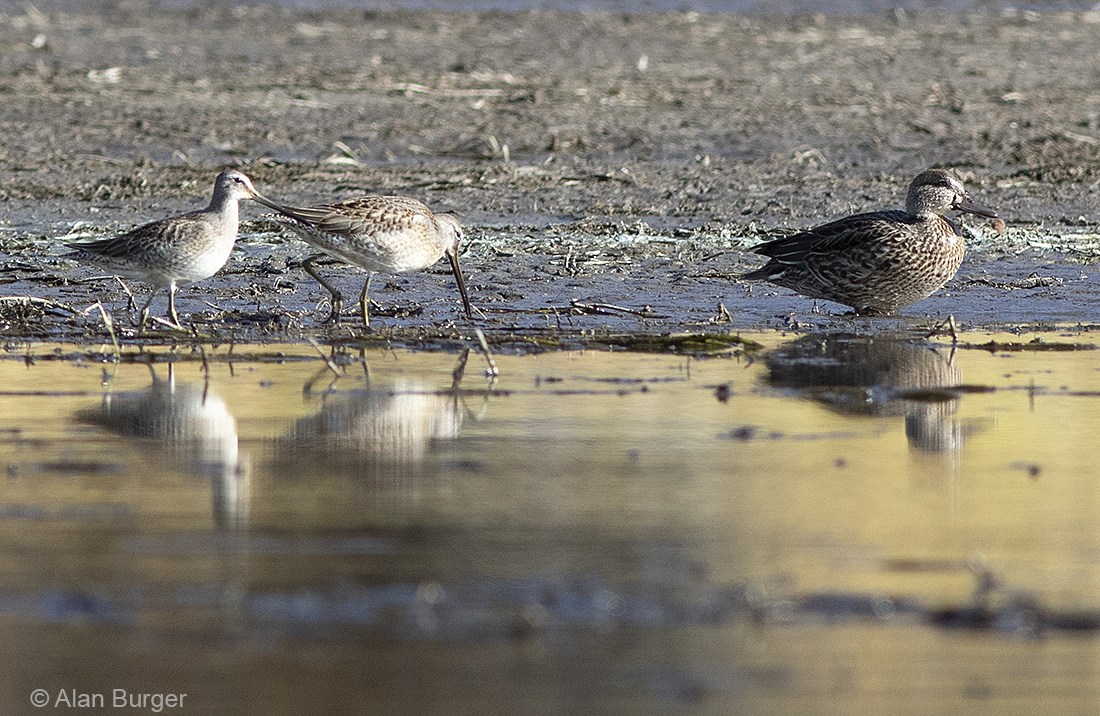 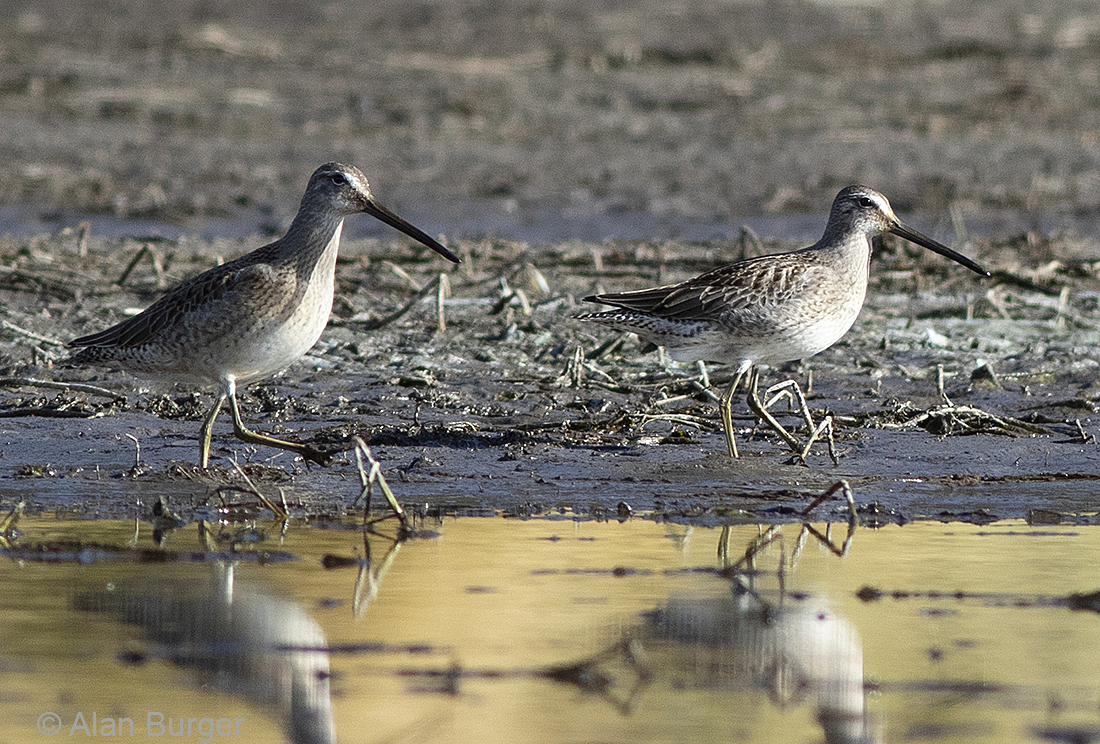 A closer look at the two Long-billed Dowitchers.

Likewise, most of the terrestrial birds that are common around the lake in summer and early fall had gone. But one interesting addition was a few Horned Larks. I could hear some of them singing snatches of melodious song and got to see one small flock of six birds foraging on the shore.

Part of a small flock of Horned Larks foraging along the shoreline, Mamit Lake, 18 October 2021. 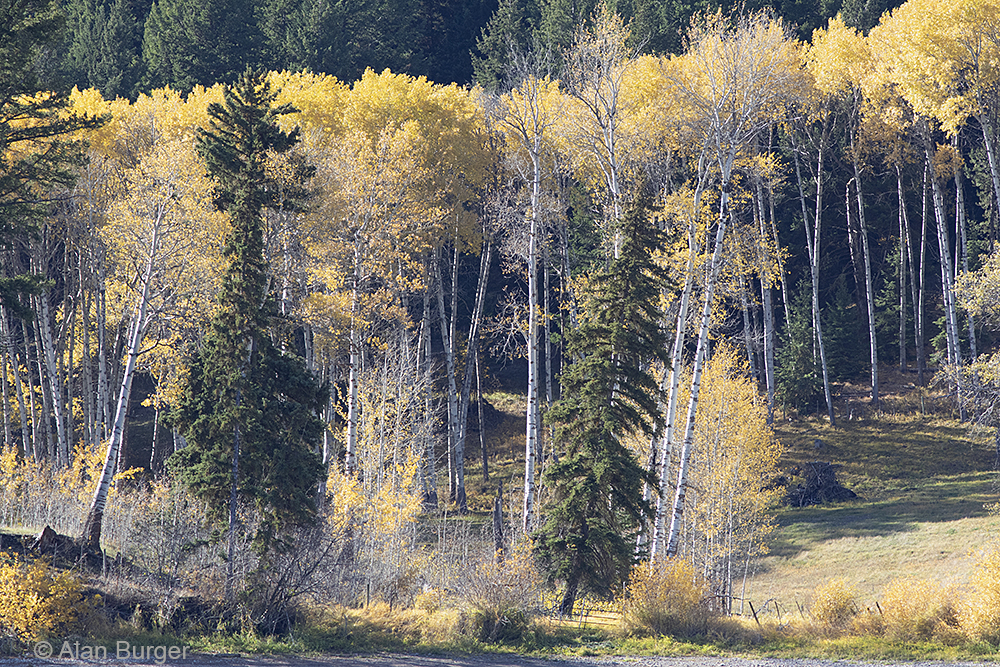 Mamit Lake (also spelled Mammette)  is just 12 km from our home in Logan Lake town. I use a Canon 7D Mk II camera with a Canon 300 mm L series lens. I keep these in a waterproof dry bag as I paddle around in a small plastic kayak.

Here are links to my earlier postings of Mamit Lake excursions: