Migrating from Montevideo – getting home from a COVID ship

Background: I was working as naturalist/lecturer on the vessel MV Greg Mortimer for Aurora Expeditions (More on MV Greg Mortimer and my Antarctic work). During our second Antarctic voyage the COVID situation around the world became very serious as a pandemic, and we cut the voyage short. Around this time, as we started heading north, one of the passengers developed a fever and was kept in isolation. Argentina and the Falkland Islands had closed their ports. We headed to Montevideo, Uruguay and anchored on 27 March about 20 km offshore in the huge gulf at the mouth of Rio Plato. Over the next 19 days we remained at anchor. Supplies were brought to the ship and a medical team came several times to do COVID tests. Eventually, out of 217 people on board (Aurora staff, ship’s crew and passengers) 128 tested positive for COVID. During our stay 8 people were taken off to hospital in Montevideo. On April 10 we went into the dock and the Australians and New Zealanders (the majority of passengers and staff) were allowed to leave and flew by charter to Melbourne. The 15 of us remaining, excluding the ship’s officers and crew, stayed on board and we went back to the anchorage.

Eventually, with a huge amount of planning and lobbying by our embassies, Aurora and many other people in several countries, the rest of us from Europe, U.S. and me from Canada were allowed to leave. I must give a huge thank-you to the Canadian ambassador in  Uruguay Joanne Frappier and her staff for amazing support and bulldog persistence in working on my behalf. At first the Canadian regulations would not allow me back into the country and it was just a day before we were due to leave that word came that I could go with the others on the flight out.

But then nature played a card and we had a major storm for 2 days which prevented getting a pilot on board, so our departure was delayed by half a day. 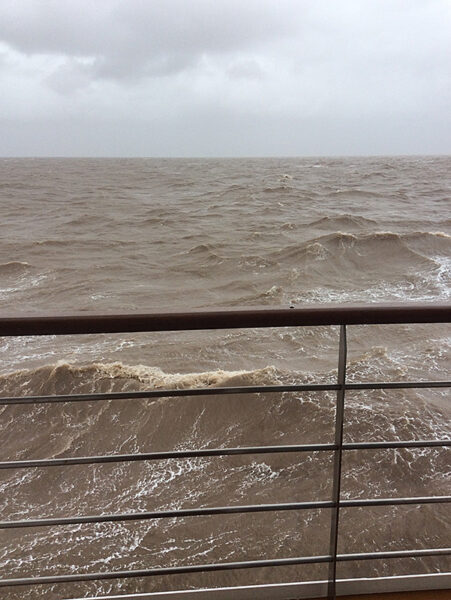 Stormy seas at our anchorage off Montevideo delayed our departure. The sea is only 10 m deep here so the waves churned up River Plate sediments making the sea brown. 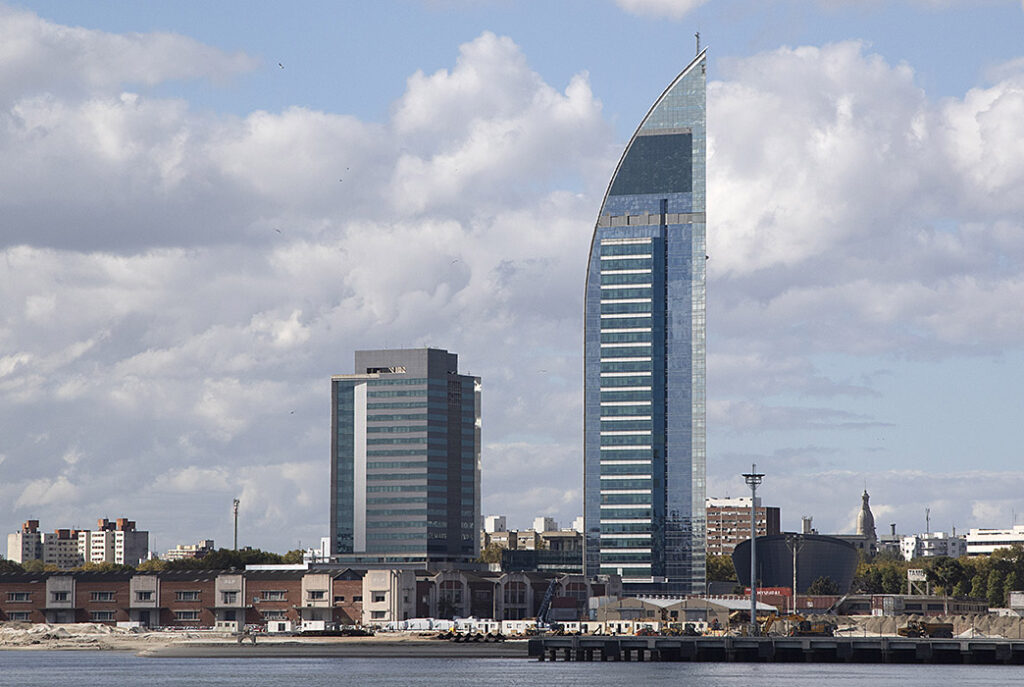 Part of Montevideo city near the harbour.

The wharf where we docked was cordoned off with a police barricade and there was a crowd of officials and media there. Even as we came into the harbour people on shore were waving and hooting their car horns. Our departure was obviously a major media event. 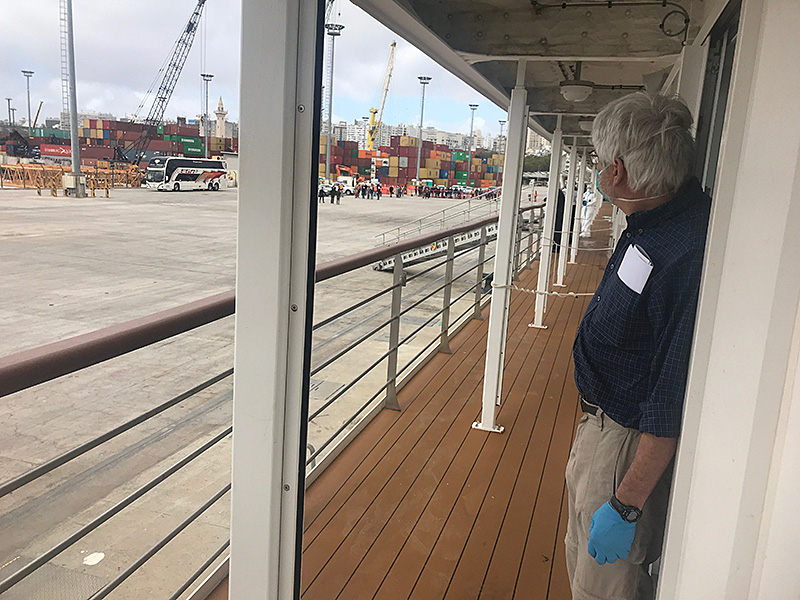 Waiting to leave the ship. Note the barricade and media at the end of the wharf.

After about an hour of waiting the bus approached the ship and we prepared to leave.

Our bus at the Montevideo harbour. A very welcome sight.

After weeks on the ship and 19 days at anchor we are finally leaving the ship. The person on the right in the PPE suit is the Uruguayan doctor who came on board for the final 10 days. Note the appropriate 2 m spacing. 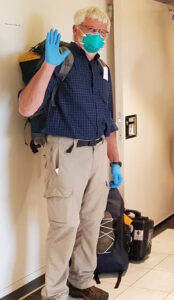 Alan preparing to leave the ship.

As our bus left the harbour an amazing thing happened. We were joined by a motorcade of 6 motorcycle police who, with sirens blaring, cleared a path for our bus through the city – stopping traffic at all the intersections. I thought that the people of Uruguay would have been glad to be rid of us – we arrived uninvited at their doorstep, with COVID infections, and consequently added to the hassles they were already having as a small country dealing with this pandemic. But, it was exactly the opposite – the people were proud of how their country had helped us and were happy to see us finally off the ship. As we drove along the beautiful seafront boulevard that runs for miles there were hundreds of people out on their apartment balconies or in the street – waving and clapping, waving the Uruguayan flag and honking their horns. It was a very emotional experience. Joanne Frappier had told me to sit on the left side of the bus and that allowed me to spot her, on her 4th floor balcony, wildly waving the Canadian flag – what a great send-off!

This Boeing 737 configured for medical evacuations took us from Montevideo to Miami. 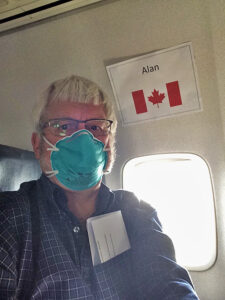 In my allotted seat on the 737 from Montevideo

This flight was organized by REVA – a company specializing in medical evacuations around the world. We had a doctor and 2 nurses on board who did regular checkups throughout the trip. 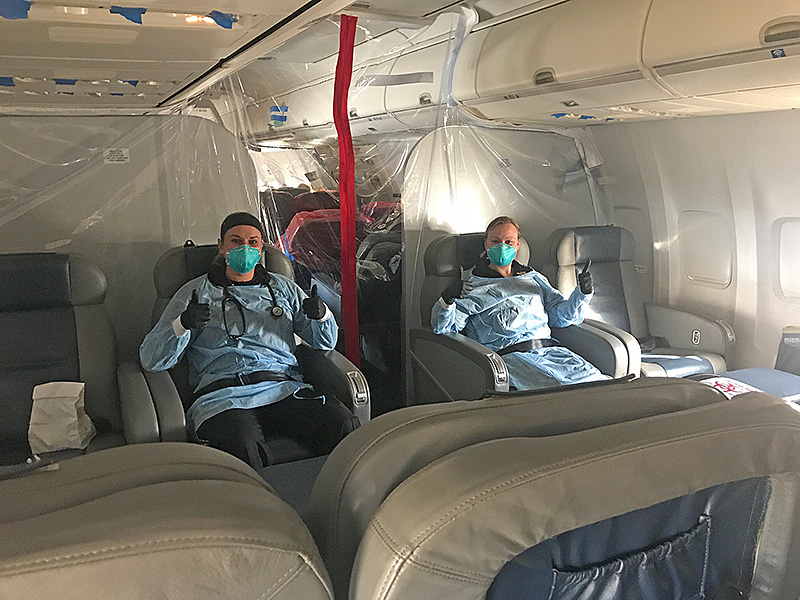 Nurses on our Montevideo – Miami flight. Note the plastic barricades which isolated parts of the plane.

We refueled in Manaus, Brazil, unfortunately in the middle of the night so we didn’t see anything of the surrounding Amazon river and forest. At Miami those of us going to the U.S. and Canada got off and the plane continued to England and Amsterdam with the European staff and passengers. We then went in smaller planes – one to Chicago and one to Phoenix and Vancouver. 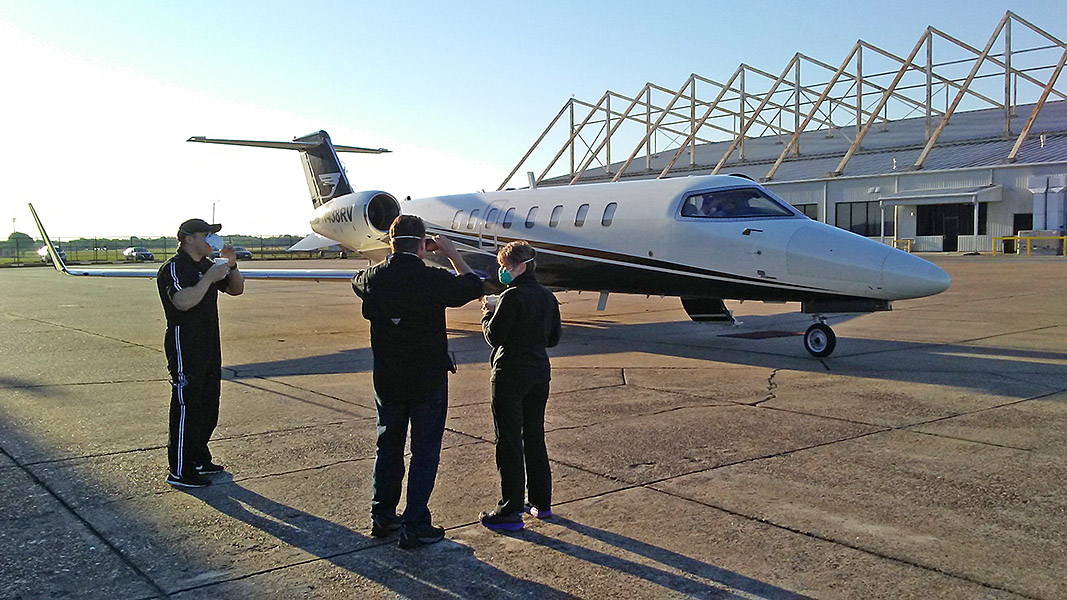 The Learjet that took me and two Aurora passengers from Miami.

I have always wanted to fly in a Learjet. This is a Learjet 45. We flew at over 45,000 feet – about 10,000 ft higher than regular commercial jets. Quite spiffy. We landed at Houston to refuel and get coffee and then on to Phoenix where the last 2 Aurora passengers were deposited. At Phoenix the pilot was told that he was not permitted to land in Vancouver as planned (no reason given) so we took off and headed to Bellingham, Washington near the Canadian border.

Alan as the lone passenger in the Learjet. The other person in the seat behind me is the medical orderly who accompanied the flight.

At Bellingham there was an ambulance waiting to take me to the Canadian border. After some delays with lots of phonecalls we set off – Bellingham is about 30 minutes drive to the border. Half way there we received a message that Canada was not going to let me in and to return to the ambulance base. Half way back to their base the driver received another message that it was OK to proceed. Back again towards Canada. At the border another bizarre scene – a line of border guards blocking our way – eventually directing the ambulance to one of the search bays. After a long wait the expected agent from the Canadian public health authority arrived. As the back of the ambulance opened there was a line of 4-5 border guards with black uniforms, visors, and surgical masks and carrying guns in their belt holsters. One doesn’t normally joke with border guards but I thought “What the f..k is this?” and said to them “Are you here to shoot me if I make a break for it?” After a stunned silence they grinned and said “Welcome back to Canada”.

The public health lady was very pleasant and after reading me my rights, “$750,000 fine or three years in jail if you break quarantine”, I was put in a large Mafia-black SUV and we followed the government car into Vancouver. I had to contrast this reception with the joyous send-off that we had received in Montevideo, but I was impressed at how seriously Canada is taking this COVID pandemic.

So I’m writing this from my quarantine hotel in Vancouver near the airport. One of my friends, Nigel, sent me a poem to welcome me back to Canada and that spurred me to respond in kind:

A robin or two and a crow
Some chickadees flitting below

Our Antarctic expedition was shortened
So South Georgia visit abortened

Montevideo was the next bet
Uruguayans might welcome us yet

At anchor we stayed nineteen days
Our exit faced many delays

My joy at being back in Canada was somewhat tempered by hearing, a few days after getting here, that one of the ship’s crew had died of COVID in the Montevideo hospital. Quite a sobering reminder of how lucky I have been in not getting seriously ill.

My longtime friend and expedition team-mate Robyn Mundy who was Deputy Expedition Leader on this voyage has written an erudite description with photos of what we experienced on the COVID ship:  https://writingthewild.net/

Article in the Guardian newspaper about the problems the remaining ship crew are experiencing: https://www.theguardian.com/environment/2020/may/03/greg-mortimer-cruise-ship-uruguay-coronavirus-allegations