There have been few detailed studies of nesting in Pink-faced Sheathbills (Chionis alba) in the Antarctic Peninsula and neighbouring archipelagos. During my visits to this region 2003-2020 as a naturalist/lecturer I documented as many sheathbill nests as I could find. Here are some photos to illustrate the locations and features of these nests.

All photos © Alan Burger, except where noted.

Sheathbills here nest among Chinstrap and Adélie Penguins, using a variety of sites. 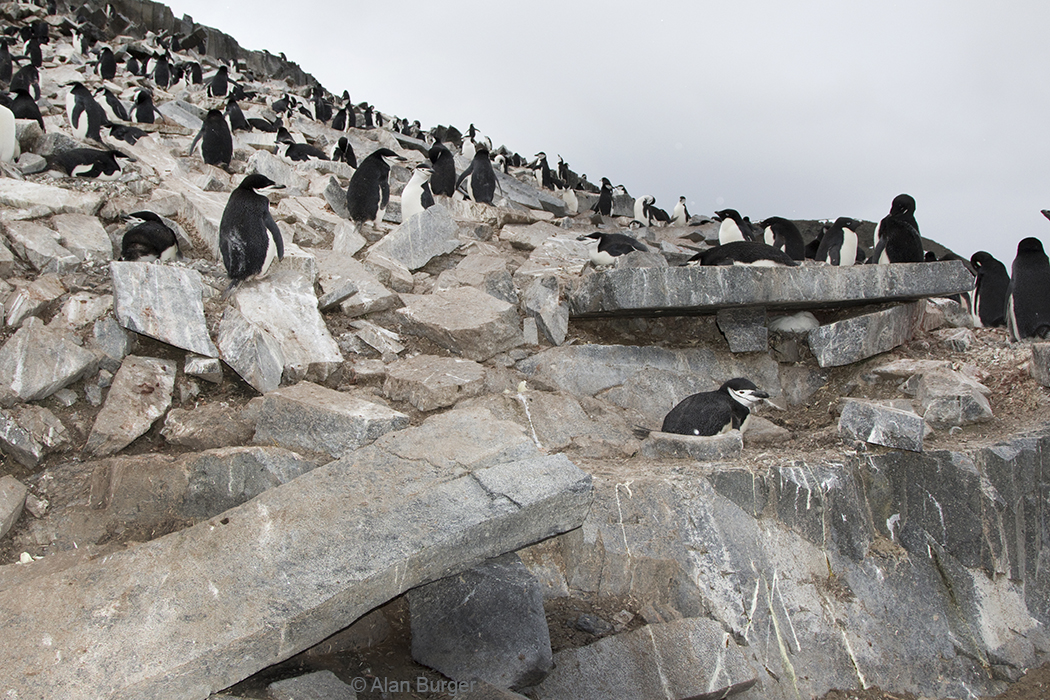 A nest among a mix of Chinstrap and Adélie Penguins – Gourdin Island, Antarctica. 02 January 2018 (nest GO-01). 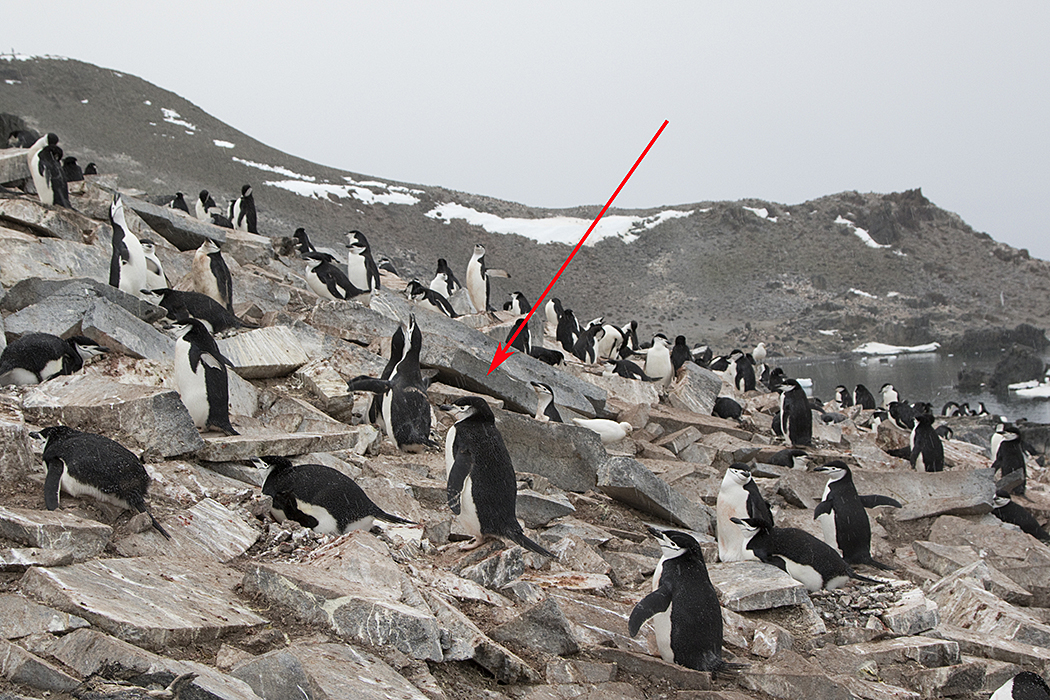 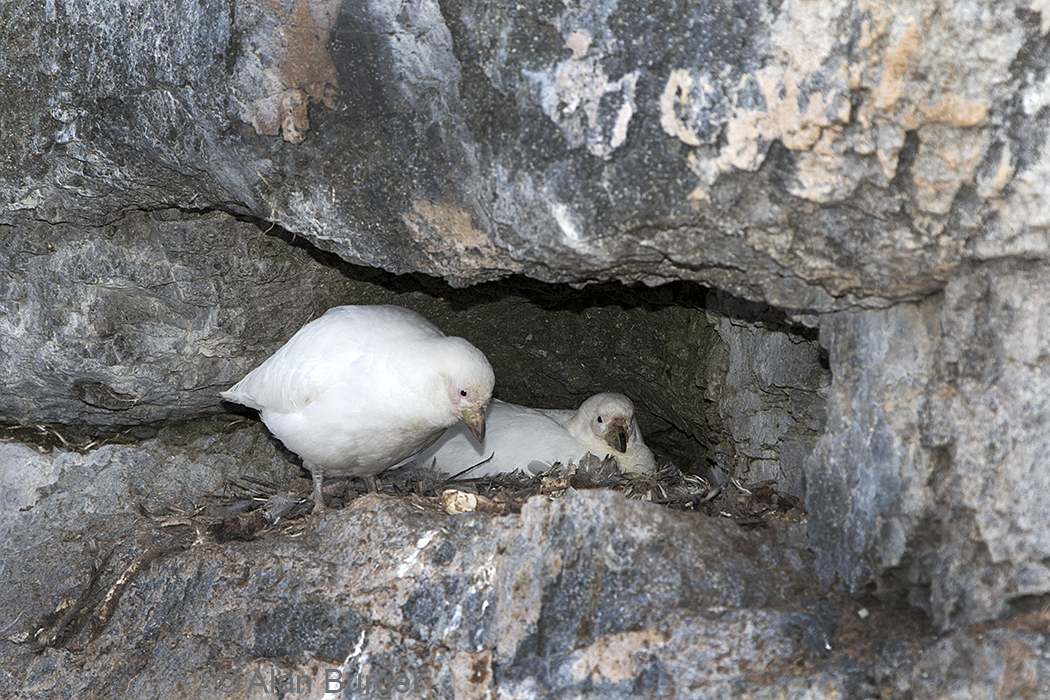 Nest within a small cliff cavity. Most sheathbill nests are more hidden than this. Gourdin Island, 2 January 2018 (nest GO-03).

Surrounded by nesting Adélie Penguins, this pair had a safe nest under a small cliff. Gourdin Island, 2 January 2018 (nest GO-04). 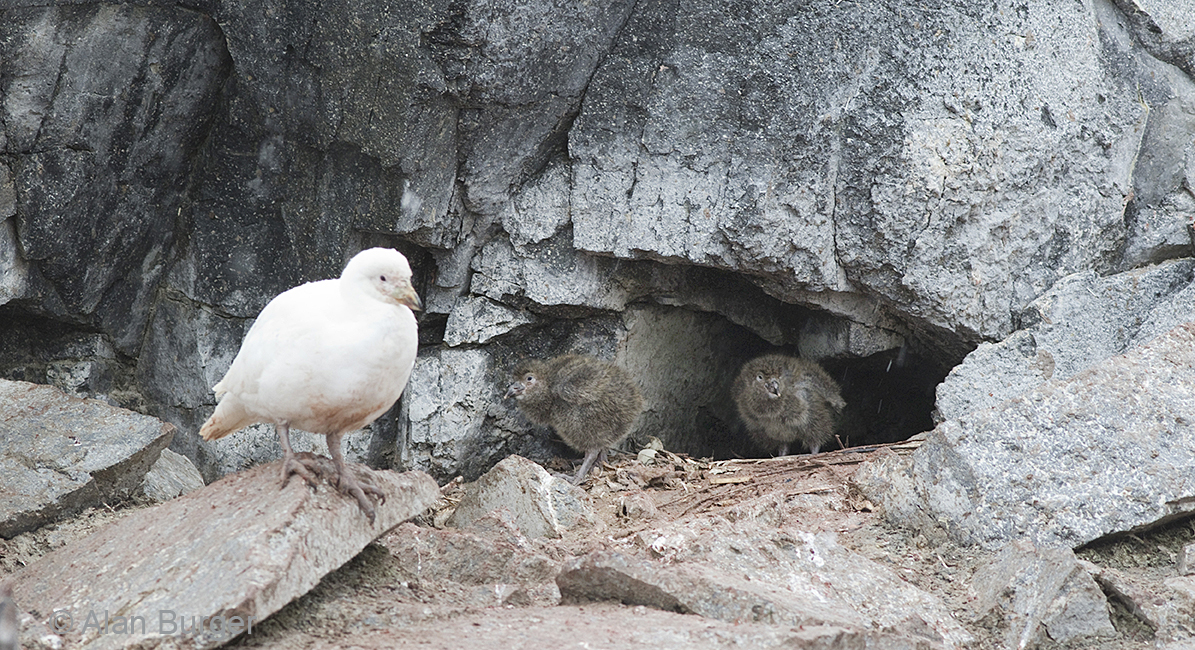 When this nest was started in December there were likely penguins close by all around it but by late January there were fewer penguins and many had moved. Gourdin Island, 24 January 2018 (nest GO-06)

Plenty of Adélie Penguins right at the doorstep of this nest. Gourdin Island, 24 January 2018 (nest GO-07)

Few nests are as close as this to the penguins, but there is not a lot of headroom in this nest cavity! Gourdin Island, 3 February 2016. Nest GO-08

Most of the sites suitable for nesting on this island are not within the penguin colonies so the sheathbills have separate nesting and foraging sites.

This sheathbill nest was under the concrete remains of the old British base on Danco Island, Antarctica. The eggs were found on 1 January 2006. Nest DA-01

Heavy snowfall can be a problem for nesting sheathbills, preventing access to the nest cavities when they should be laying eggs in mid-December. Here is the same nest site (now adorned with a plaque) in December 2017. 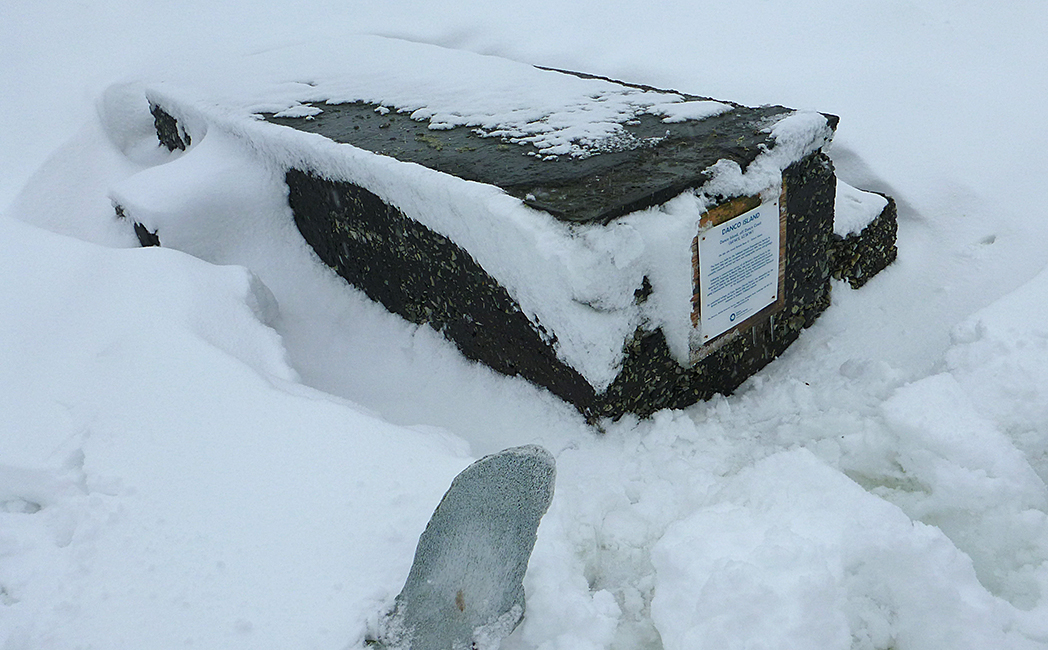 This is all that remains of the old British base on Danco Island. Sheathbills sometimes nest in the cavity under the concrete but not when the snow is so thick – 23 December 2017. Nest DA-01

This nest on a small cliff was 30 m or more from the nearest breeding penguins. The bird was incubating two eggs. Note the off-duty mate standing above the nest site. Danco Island, 3 January 2013 (Nest DA-02 was 2013 nest 1) 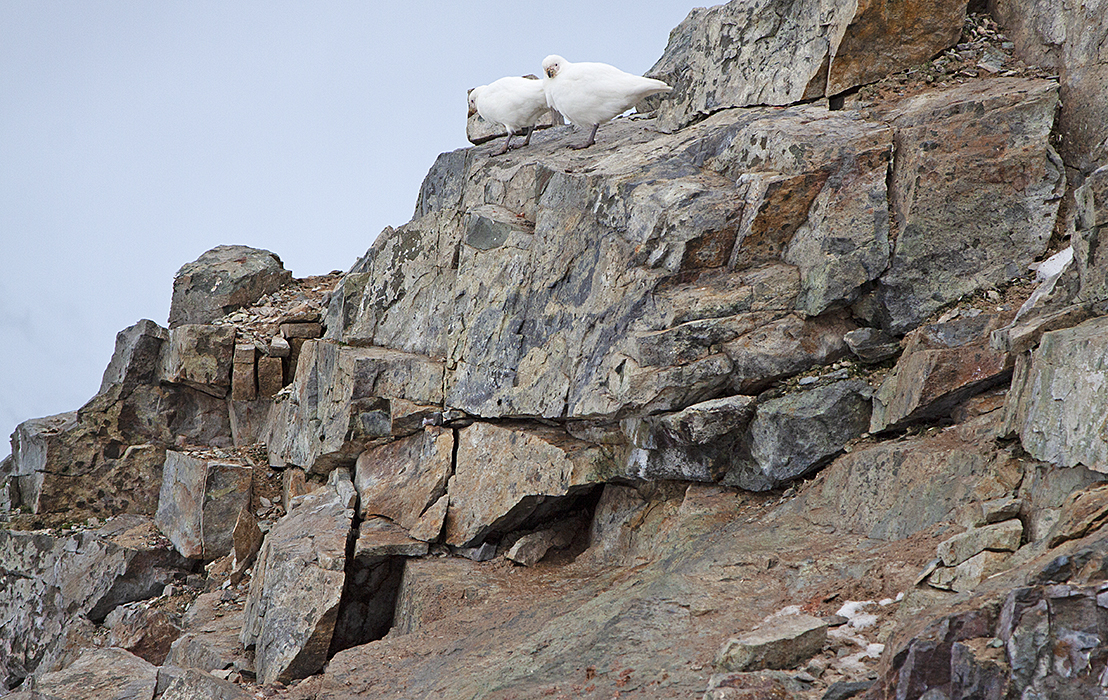 The presence of a pair at the nest site suggests that it was occupied in the 2013-14 season but on 6 March 2014 there was no sign of chicks – perhaps one or two were hiding in the nearby crevices? Danco Island, nest DA-02. 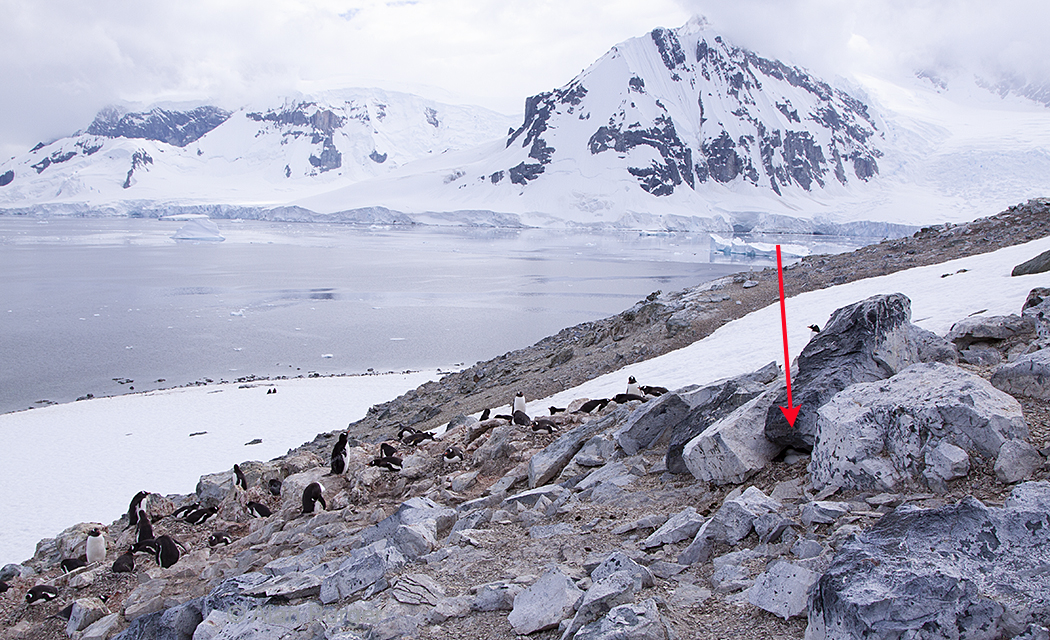 The rocky slopes of Danco Island do not provide many suitable nest sites but this one is fairly close to the nesting Gentoo Penguins. Danco Island, 3 January 2013 (Nest DA-03 was 2013 nest 2)

Close-up of the same nest as above. The bird was incubating two eggs – note the difference in coloration of the eggs. Danco Island, 3 January 2013 (Nest DA-03 was 2013 nest 2)

Once again on Danco Island the sheathbills are nesting some distance from the penguins, but this nest site was used in multiple years. Danco Island, 3 January 2013 (Nest DA-04 was 2013 nest 3)

When visited 14 months later the site appeared to have been used again but there were no adults or chicks nearby ….. 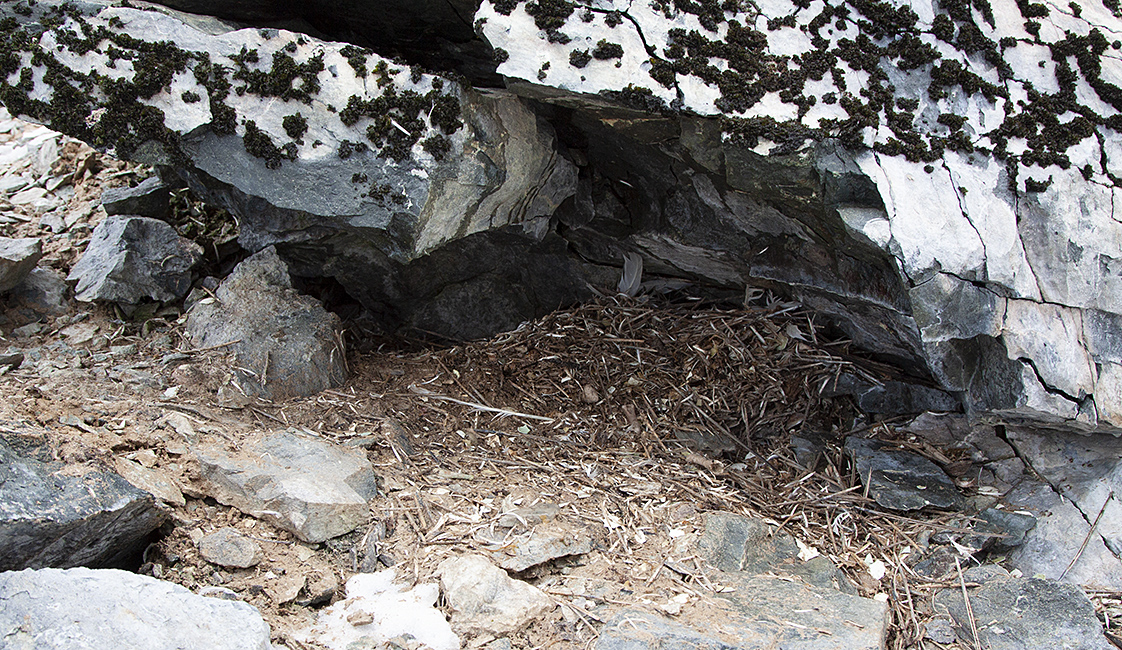 The same nest as above on 6 March 2014 with no sign of adults or chicks nearby. Danco Island, Nest DA-04.

Here is the same nest site five years before and earlier in the season – with persistent snow a problem.

Unusually heavy snow cover did not deter this pair of sheathbills from nesting in their usual site – Danco Island, 13 December 2009. Nest DA-04 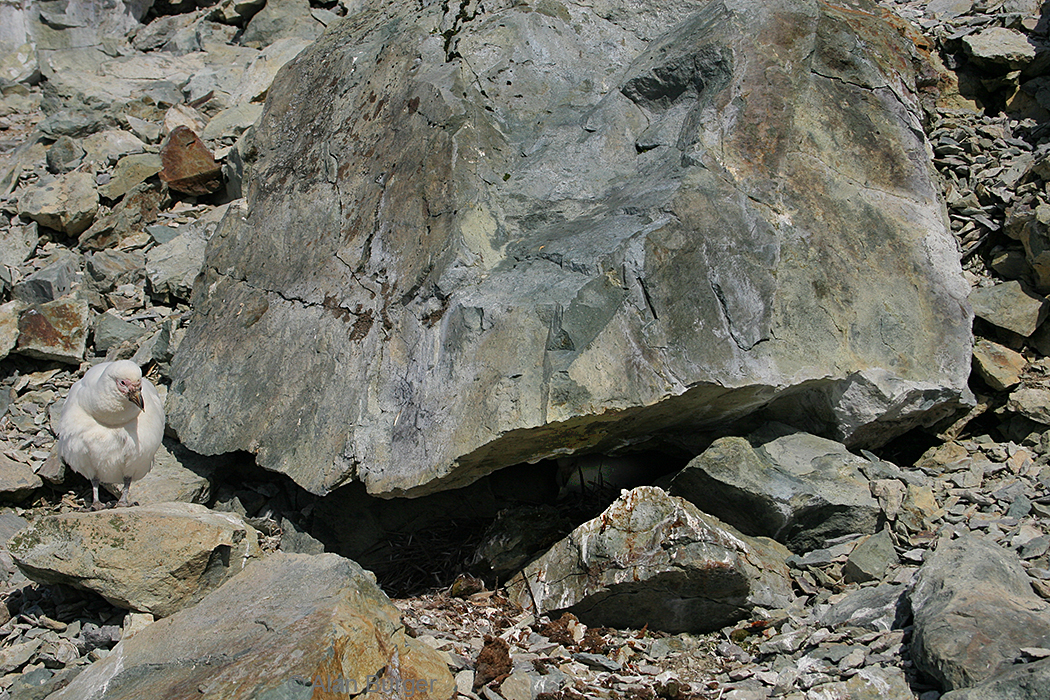 Nest on Danco Island, Antarctica. The incubating adult is barely visible within the nest cavity with the off-duty mate outside. 20 January 2006, Nest DA-05.

Here is the same nest 14 years later with a fledgling ……

Late summer snow at this nest site. The pair had two newly-fledged chicks at the site (one on the right). Danco Island, 19 March 2020. Nest DA-05. 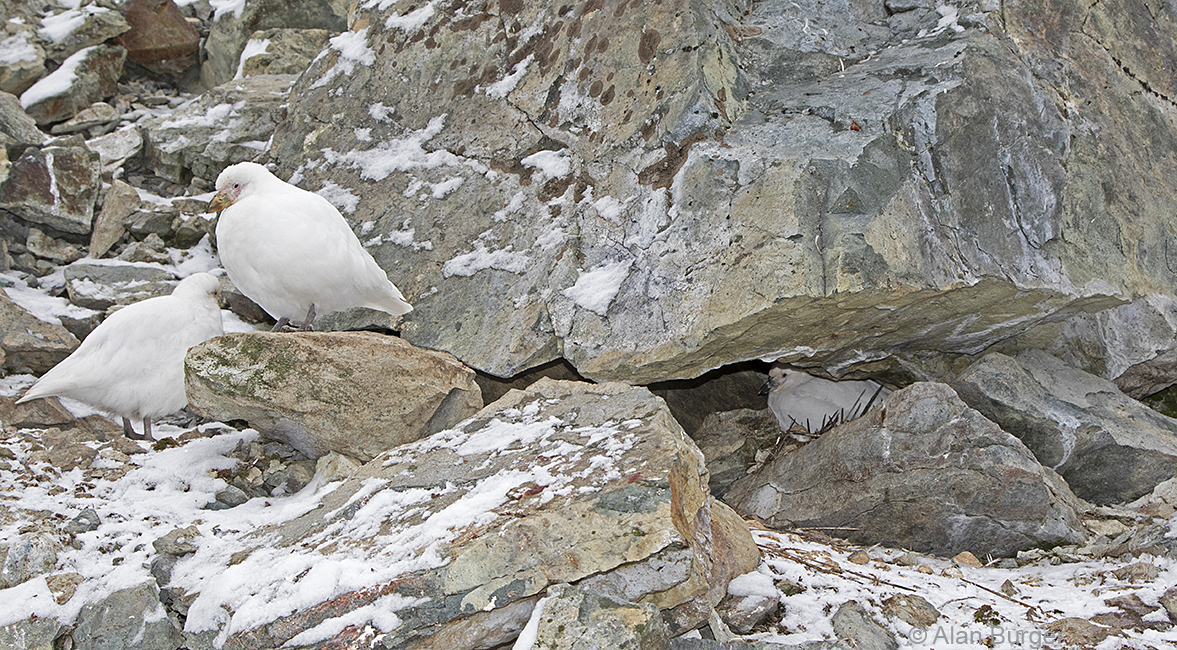 Another view of the same nest – now one of the two fledglings is hiding within the nest cavity while the parents stand outside. Danco Island, 19 March 2020. Nest DA-05.

This small island has an unusually large number of nesting sheathbills, getting food from the breeding Chinstrap Penguins, Imperial Cormorants and seals that haul out on the snow. Most of the nests on Hydrurga Rocks had large aggregations of limpet shells in and in front of the nest cavity. The Kelp Gulls that nest on the island bring these limpets ashore to eat and the sheathbills later carry the shells to their nest sites.

This nest is in a small cave on a cliff, with Chinstrap Penguins and Imperial Cormorants nesting nearby. Hydrurga Rocks, 6 January 2013. Nest HY-01

This nest, with a scenic view, gets the prize for the most limpet shells, courtesy of the Kelp Gulls that nest just up on the nearby ridgetop. The nest has been occupied for many years, hence the big collection of shells. Hydrurga Rocks, 6 January 2013. Nest HY-02 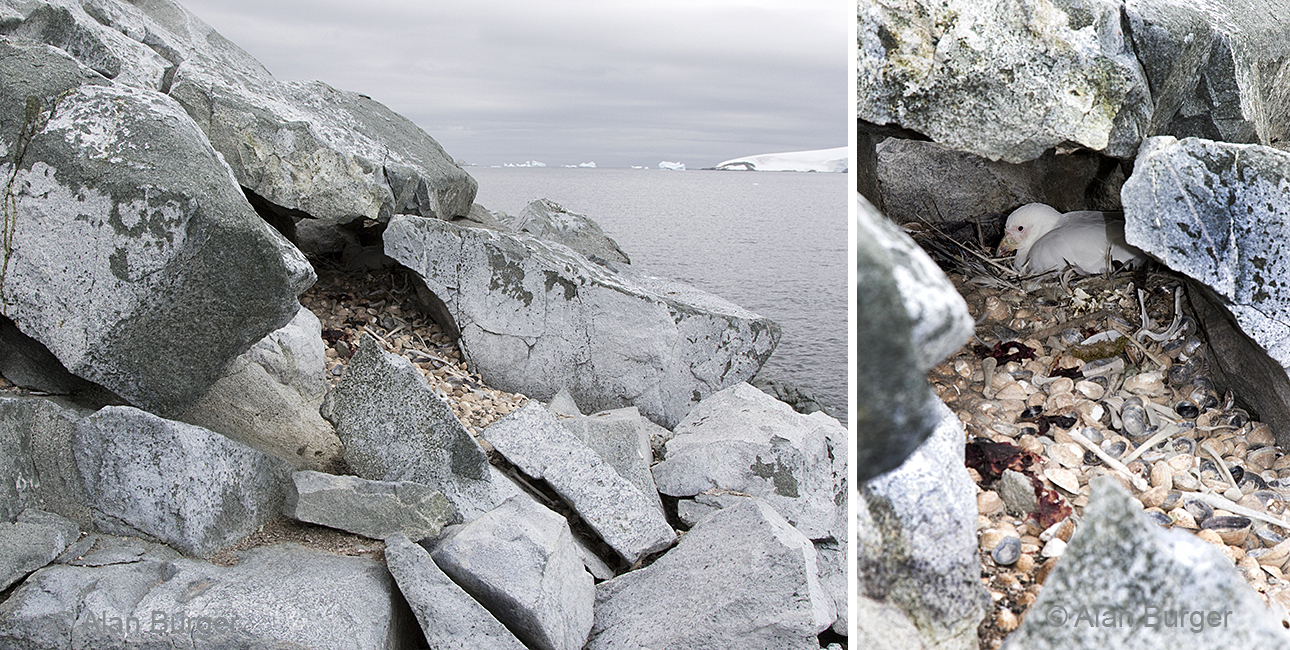 Two seasons later – the nest is occupied again. The bird was incubating a single egg, but must have laid a second egg as you can see in the following photos. Hydrurga Rocks, 19 December 2017. Nest HY-02 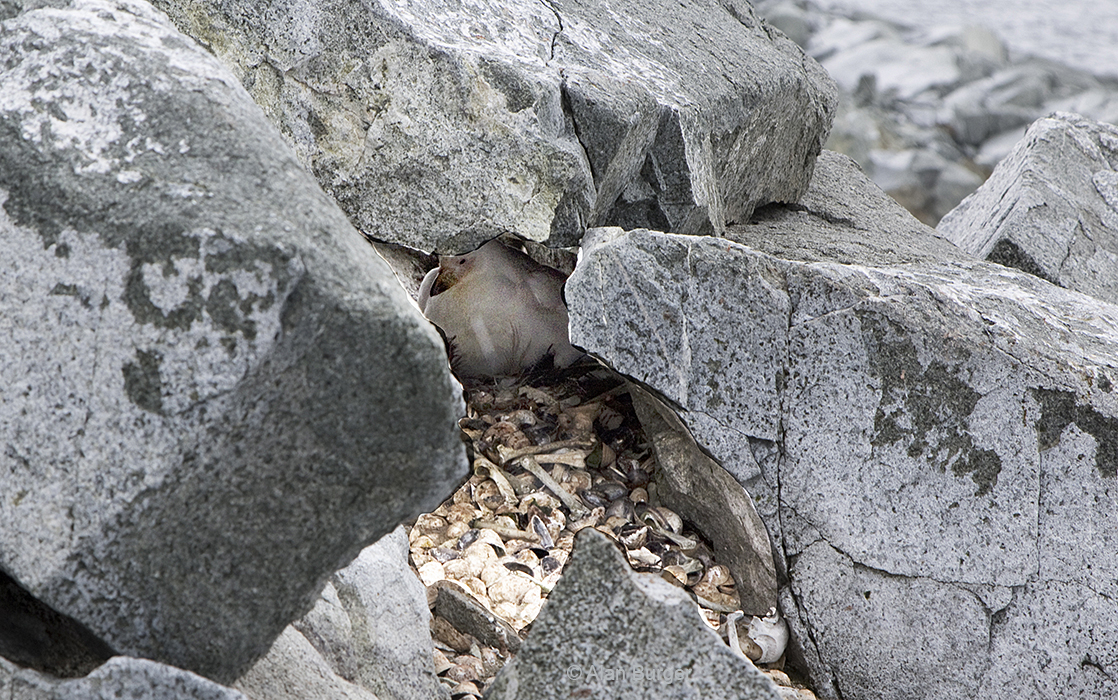 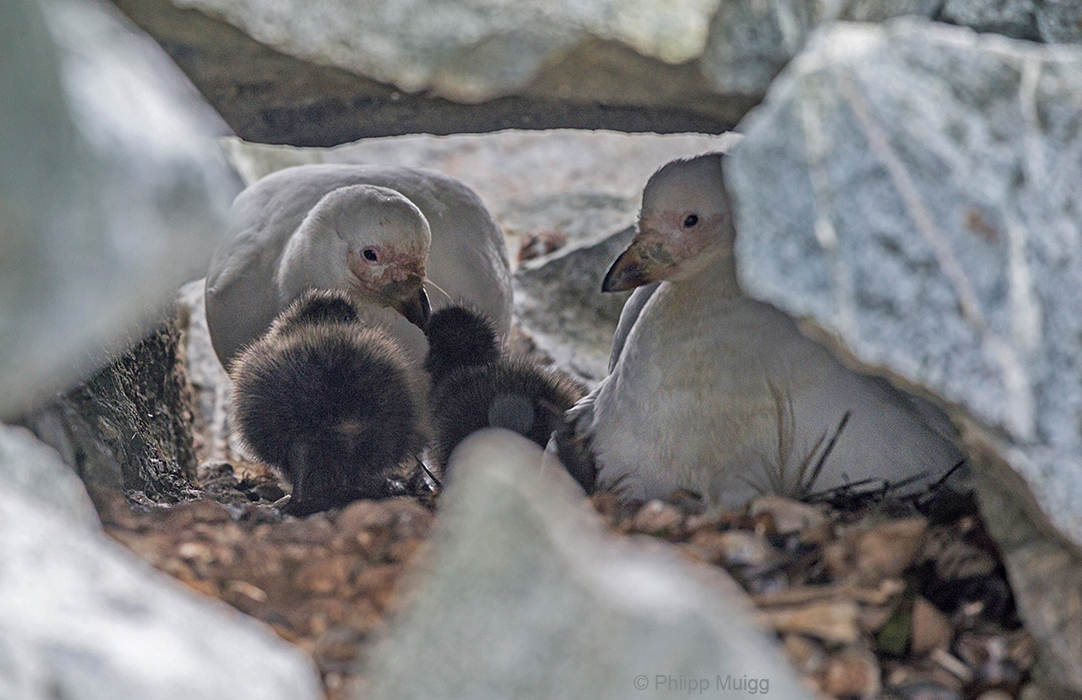 The same nest again showing one parent delivering food to the two tiny chicks while the other parent remains on the nest. Hydrurga Rocks, 25 January 2018. Nest HY-02. Photo: © Philipp Muigg

This nest is among the breeding Chinstrap Penguins. Hydrurga Rocks, 14 January 2013. Nest HY-03 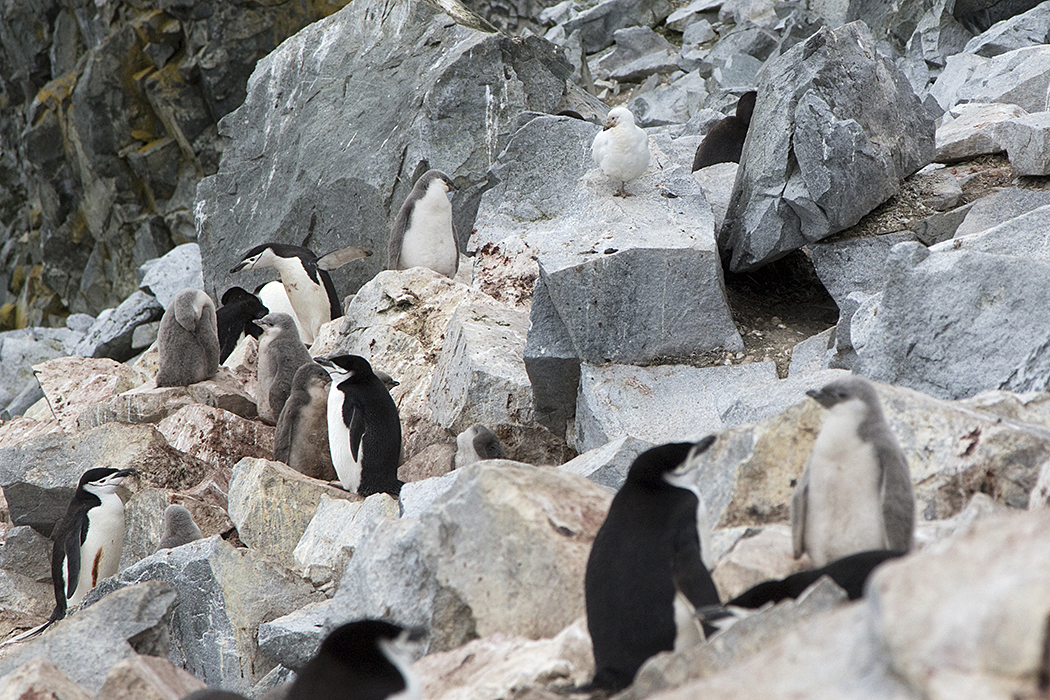 The same site three years later – evidently occupied but not closely checked to avoid disturbing the penguins. There might have been a chick or two hiding in the rocks. Hydrurga Rocks, 4 February 2016. Nest HY-03.

A nest beneath huge boulders at the foot of a cliff. There were likely one or more chicks hiding nearby. Hydrurga Rocks, 4 February 2016. Nest HY-04 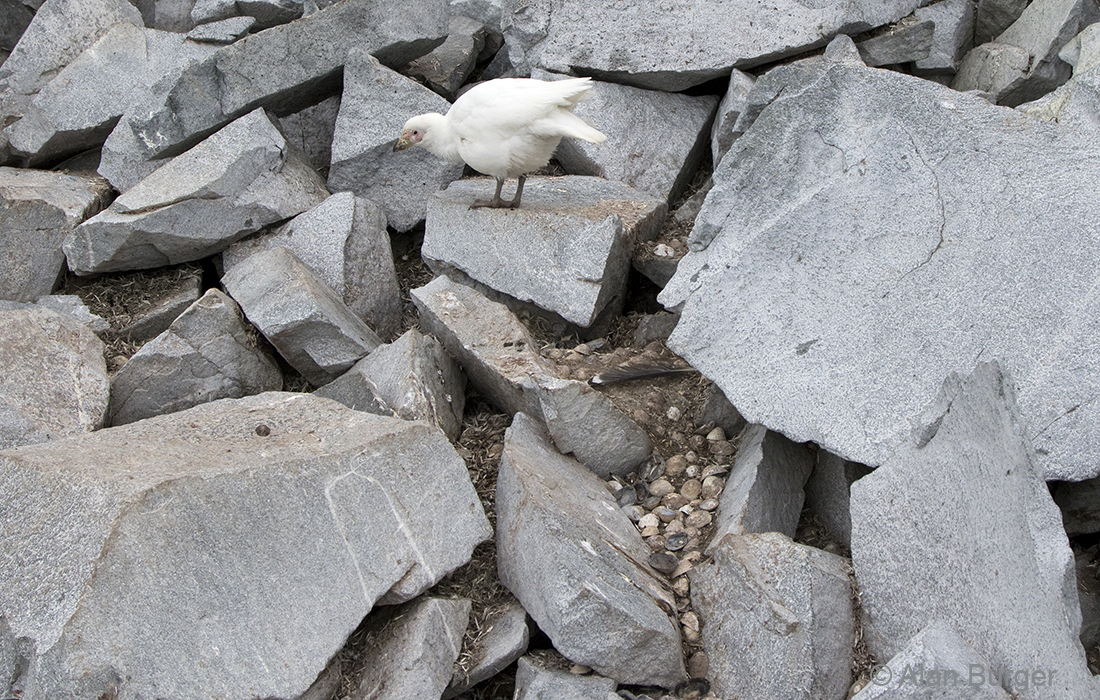 Two indicators of a likely nest – an attendant adult giving a threat display and a pile of decorative limpet shells and penguin bones. The cavities beneath the boulders were too complex to find a nest, but two years later breeding here was confirmed – see the next photos. Hydrurga Rocks, 4 February 2016. Nest HY-05.

Here is an ideal nest site – safe and deep within big boulders with Chinstrap Penguins right at the doorstep and Imperial Cormorants just up the hill. The pair had at least one small chick in 2018. Hydrurga Rocks, 25 January 2018. Nest HY-05 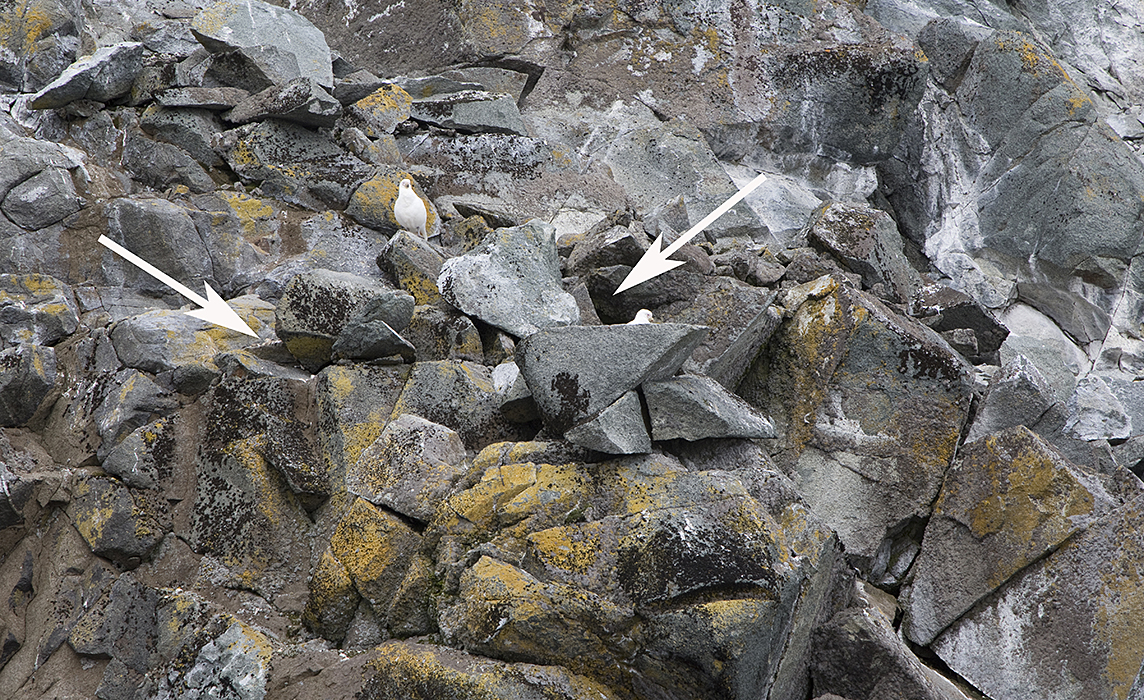 This is one of the more exposed nests, on the top of a 10 m cliff and below a Chinstrap Penguin colony. Here the bird is incubating two eggs. Hydrurga Rocks, 6 January 2013. Nest HY-07 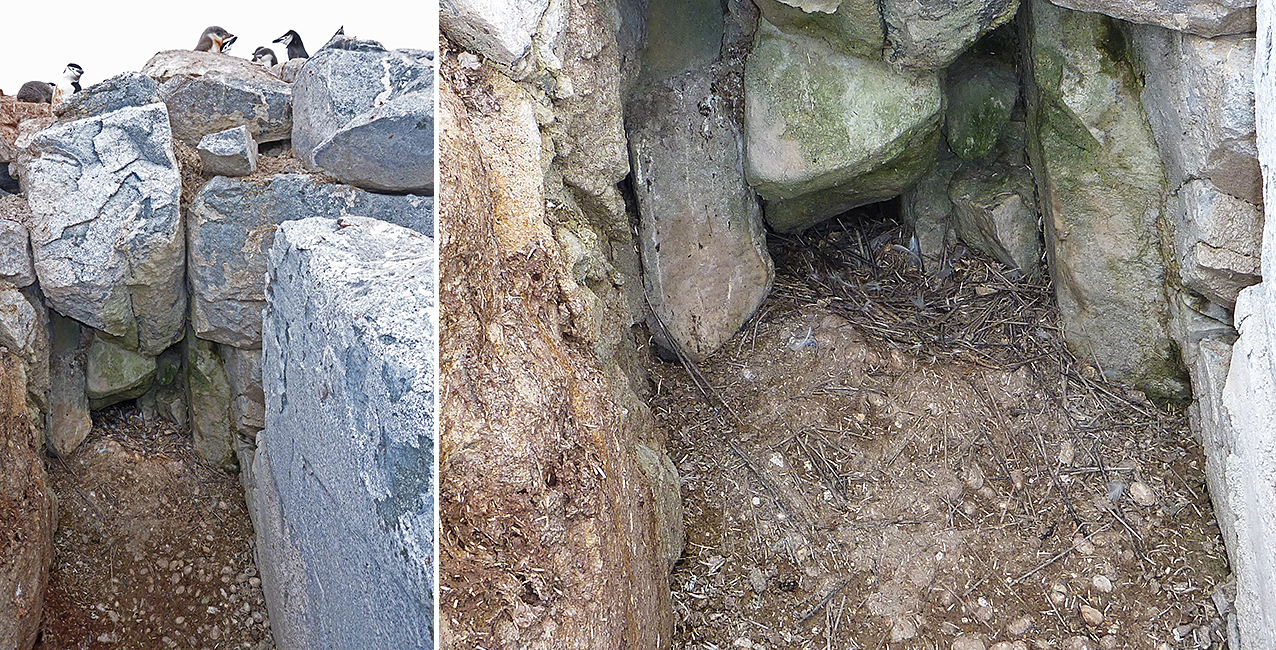 The same site three years later. The nest was used in the 2015-2016 season, based on fresh nest material, but there was no sign of chicks on 4 February 2016. With skuas and gulls nesting nearby this exposed nest would be vulnerable to predation. Hydrurga Rocks, nest HY-07

High on the steep slope and under a huge boulder, this nest was 10-20 m from the nearest breeding penguins. There was at least one chick in 2016. Hydrurga Rocks, 4 February 2016. Nest HY-08. 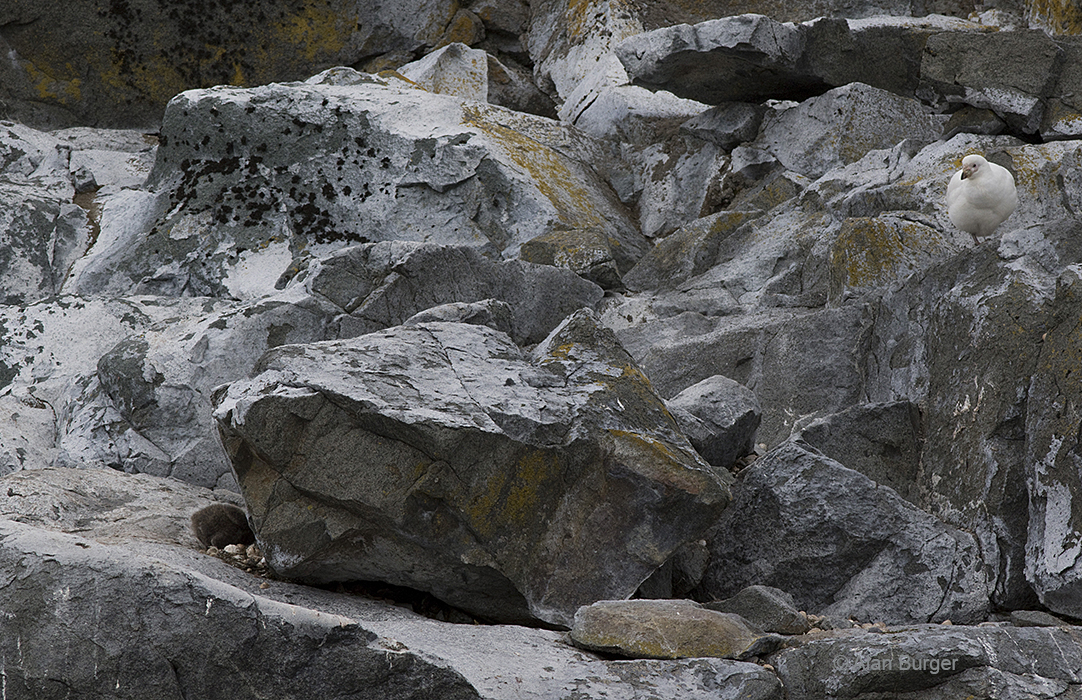 The actual nest location is uncertain but here is a small chick (on the left) and an adult (right) – the nest is somewhere under these boulders. Hydrurga Rocks, 4 February 2016. Nest HY-09. 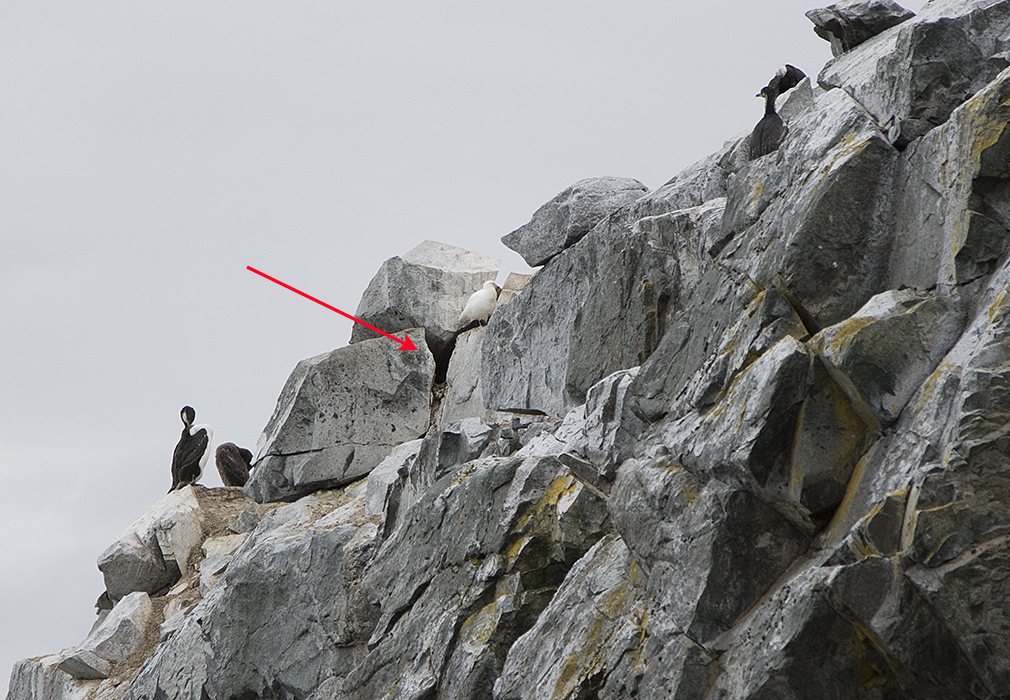 This is the site of the 1940s British base, now a popular museum – the most visited site by tourists to the Antarctic Peninsula. Here the buildings provide safe and protected nesting sites for several pairs of sheathbills and Port Lockroy has one of the highest densities of sheathbills (breeding and non-breeding) on the Peninsula. 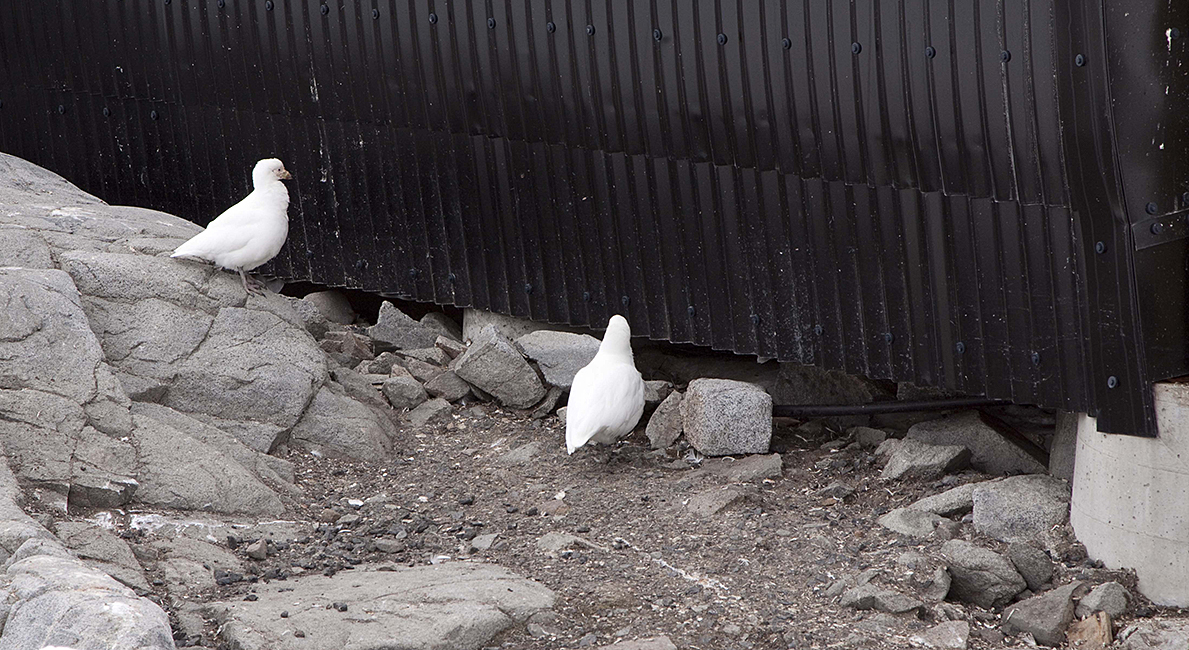 A pair of sheathbills regularly nests under the staff accommodation Nissen hut at Port Lockroy. See the next photo. 27 December 2012.

Sheathbill chicks at their nest site under the staff accommodation building at Port Lockroy – 25 February 2014.

This pair raised a chick from a nest under the main museum building at Port Lockroy, 9 March 2015.

Two likely nest sites under the buildings at Port Lockroy. Pairs of sheathbills were regularly seen standing together at these locations (see next photo). 27 December 2012.

This site is the only one where I documented sheathbills nesting within a cormorant colony, although at other sites (e.g., Jougla Point next to Port Lockroy; Hydrurga Rocks) the sheathbills do forage among the nesting cormorants as well as nesting penguins.

A pair of sheathbills nesting within a colony of Imperial Cormorants. The incubating bird can be seen in the nest cavity. Paradise Harbour, 26 December 2012

Several pairs of sheathbills nest within or adjacent to the vast King Penguin colony at St. Andrews Bay (ca. 90,000 penguin pairs). It is not possible to access most of these sheathbill nests so these are distant photos. 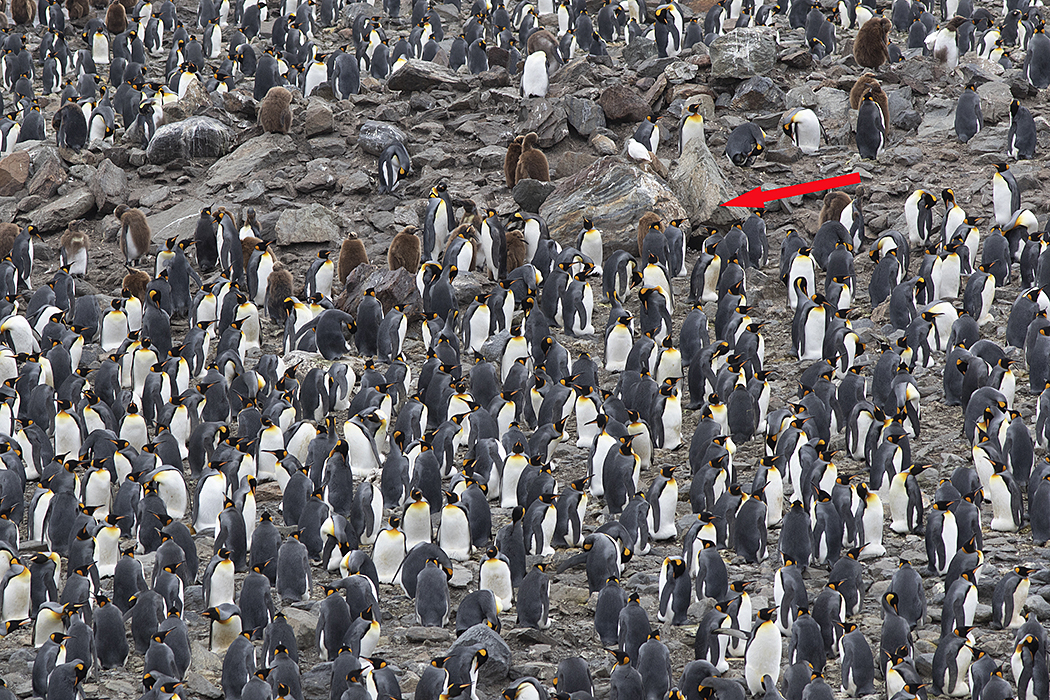 A pair of sheathbills was nesting in the cavity below these rocks – St. Andrews Bay, South Georgia. 17 January 2016. Nest SA-01. 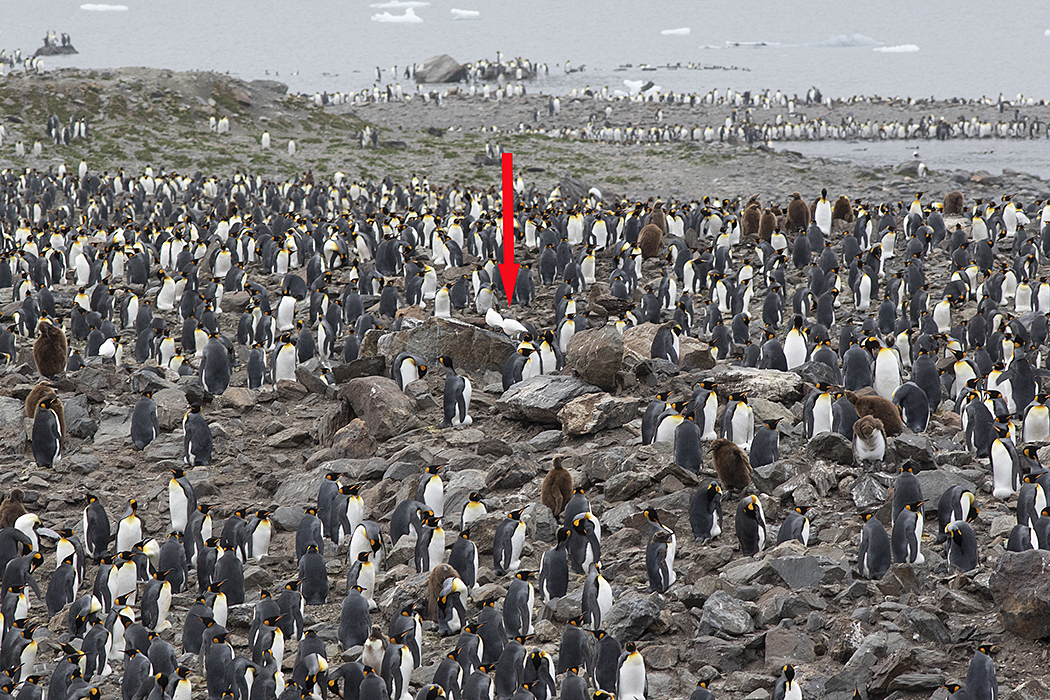 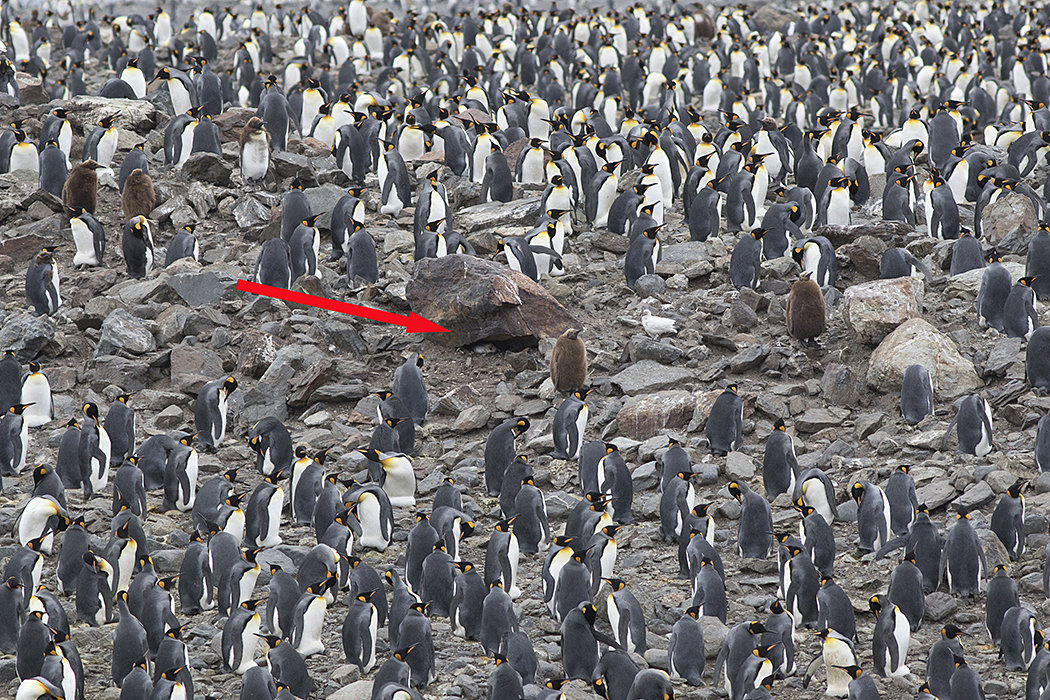 A sheathbill is visible sitting on a nest beneath this huge boulder, while its mate stands nearby. St. Andrews Bay, South Georgia. 17 January 2016. Nest SA-03. 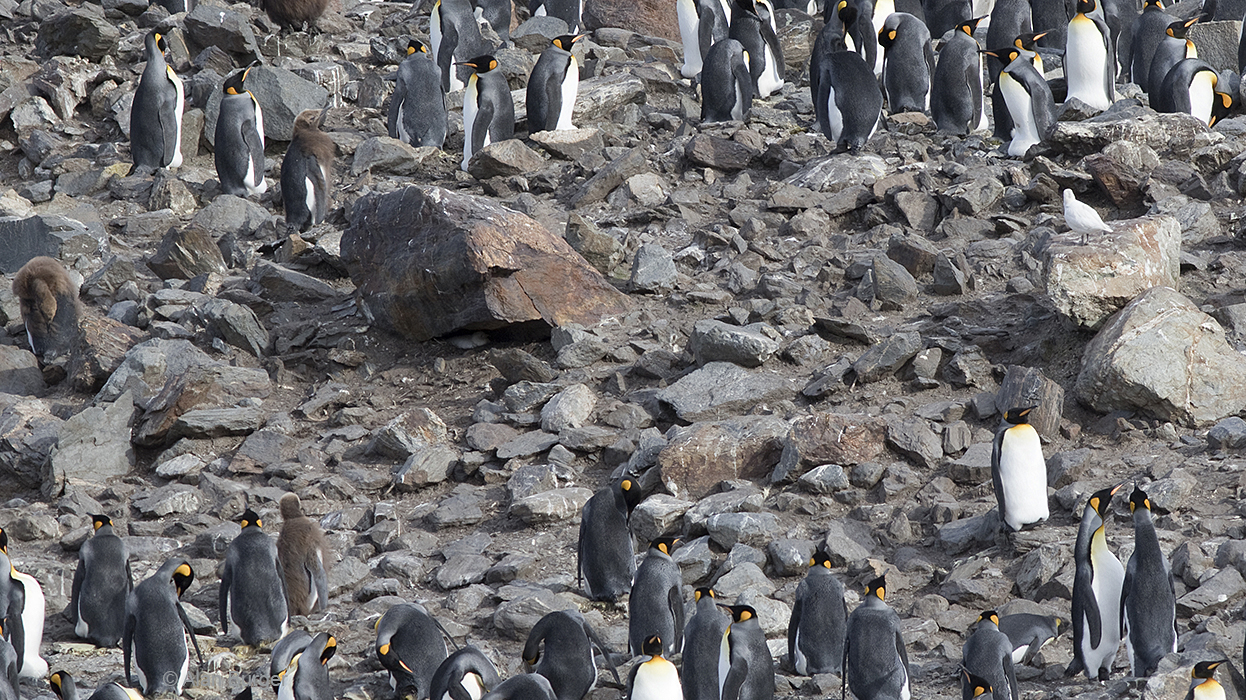 Sheathbills once again nesting in the same site among the King Penguins at St. Andrews Bay. Note the bird in the nest cavity and its mate standing on a nearby lookout – 19 January 2018. Nest SA-03. 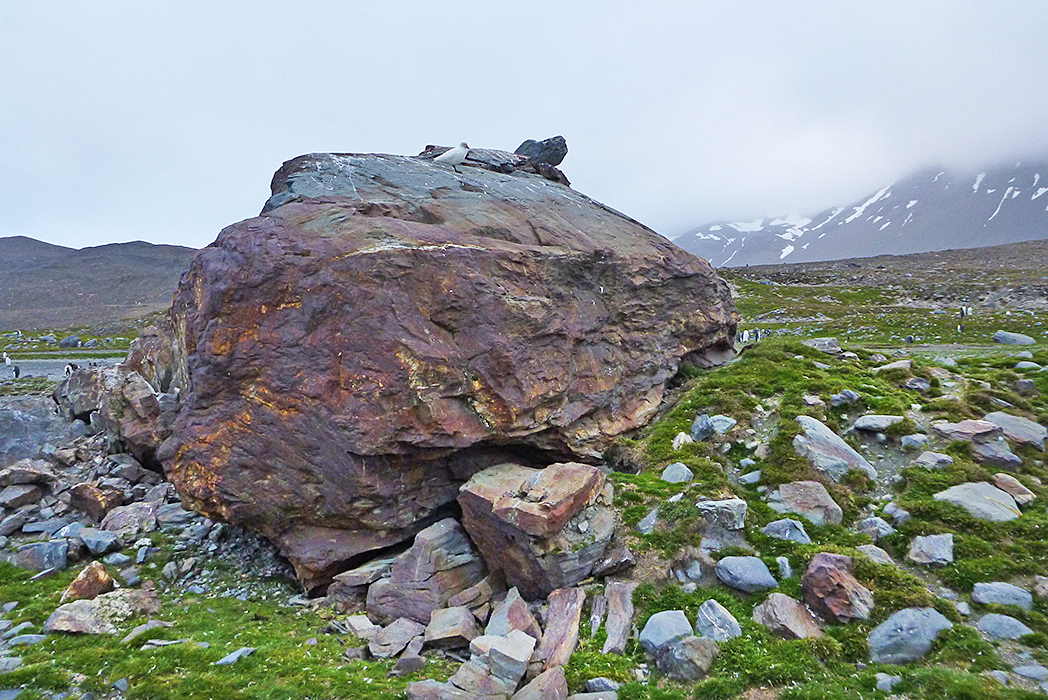 A pair of sheathbills had a nest somewhere deep below this immense rock next to the King Penguin colony. One of the pair is standing on top of the rock. St. Andrews Bay, South Georgia. 17 January 2016. Nest SA-04. 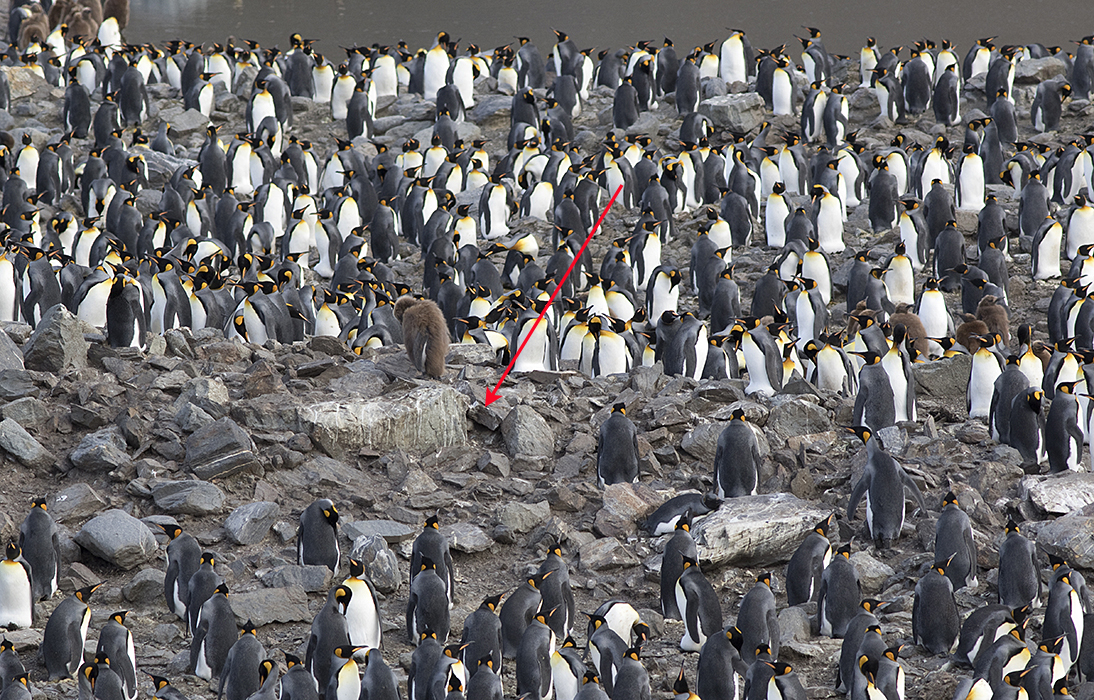 Another nest site within the midst of the King Penguins. The incubating adult is just visible within the nest cavity. St. Andrews Bay, 19 January 2018. Nest SA-05.

Aurora Expeditions passenger Richard Scurfield found this nest on Prion Island during a scheduled visit there. No details are available. 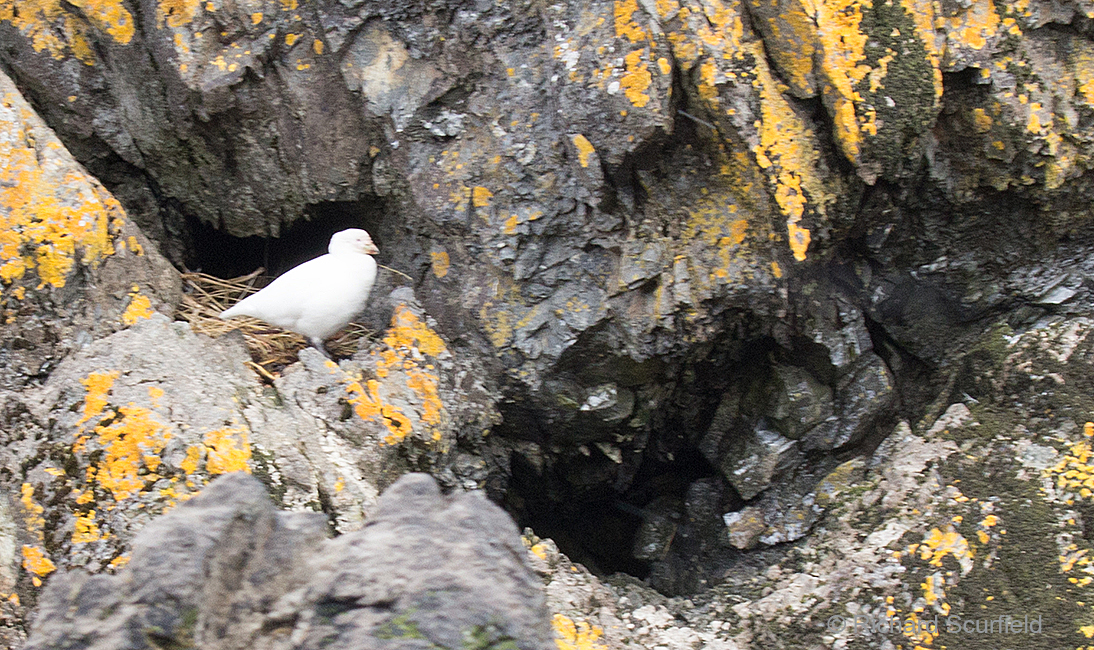 A Pink-faced Sheathbill nest on Prion Island, South Georgia – 19 January 2016. Since there is tussock grass vegetation available at this location, that is what the sheathbills used to build their nest. Photo: © Richard Scurfield.