Here are some photos from my two 2020 voyages to the Antarctic. Both trips were to the Antarctic Peninsula. The first also dipped into the Weddell Sea (east of the Peninsula). The second trip was meant to go to South Georgia and the Falkland Islands as well as the Peninsula but unfortunately the COVID pandemic killed that part.  (For more my COVID catastrophe click here). 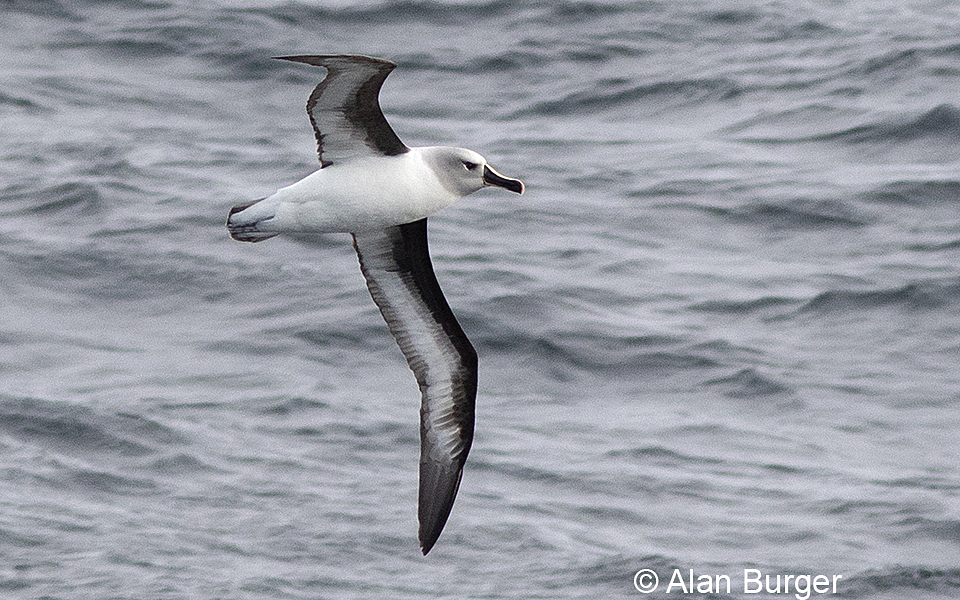 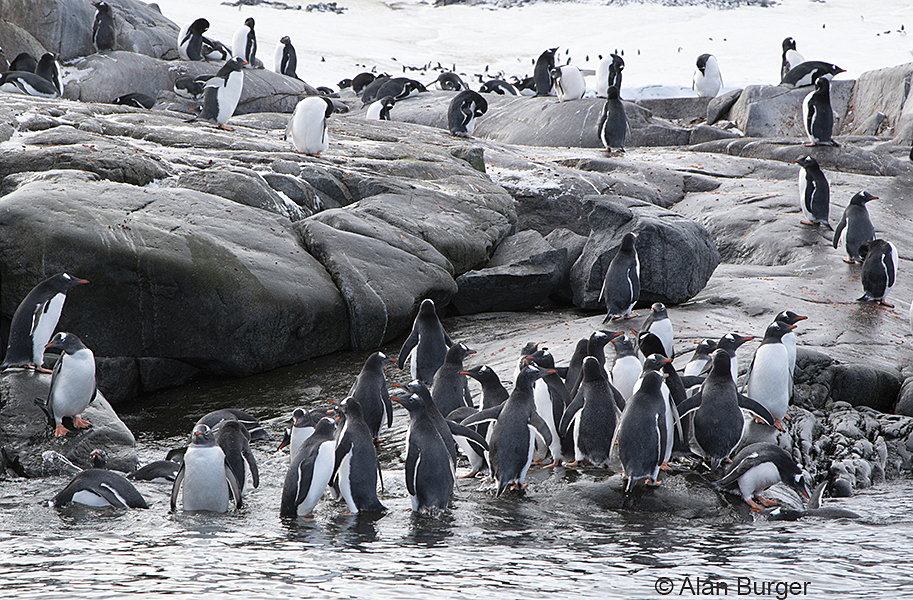 Gentoo Penguins at Port Charcot, Antarctic Peninsula. Most of these are newly-fledged juveniles testing out the water. © Alan Burger

I had done 27 voyages to the Antarctic Peninsula over the past 16 years and never seen an Emperor Penguin here until this year. I had seen them in the Ross Sea in 2015. So it was an amazing surprise to come across this Emperor in immaculate plumage in the Argentine Islands near the Ukranian base Vernadsky. The breeding colonies of this largest of all penguins are well to the south of this area. 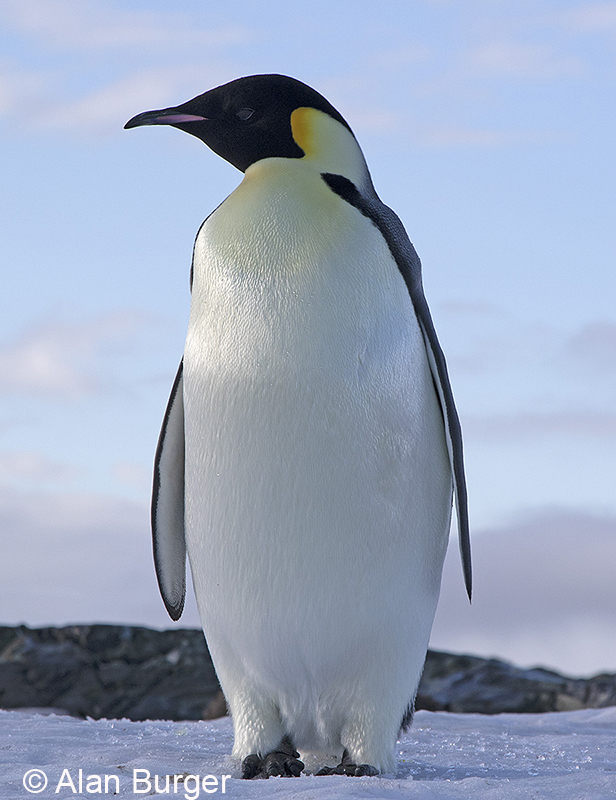 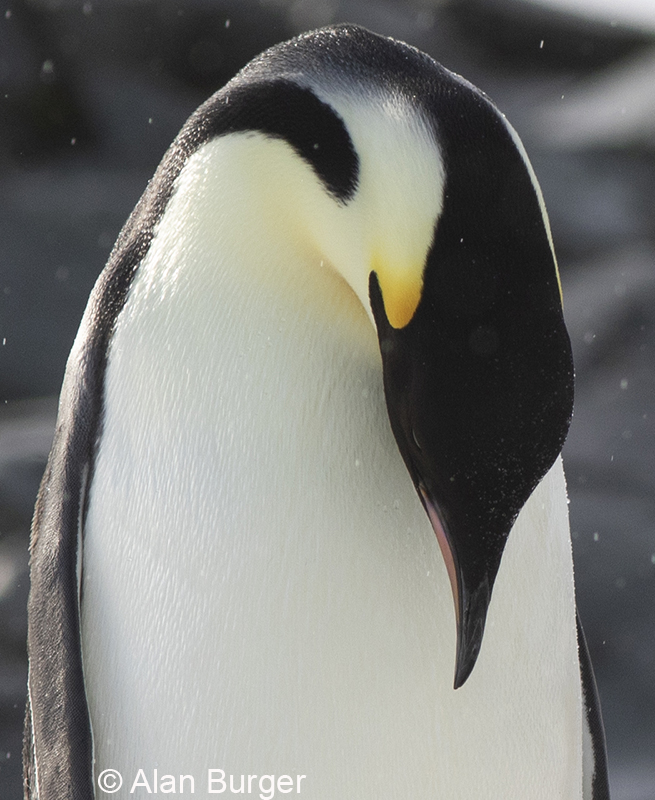 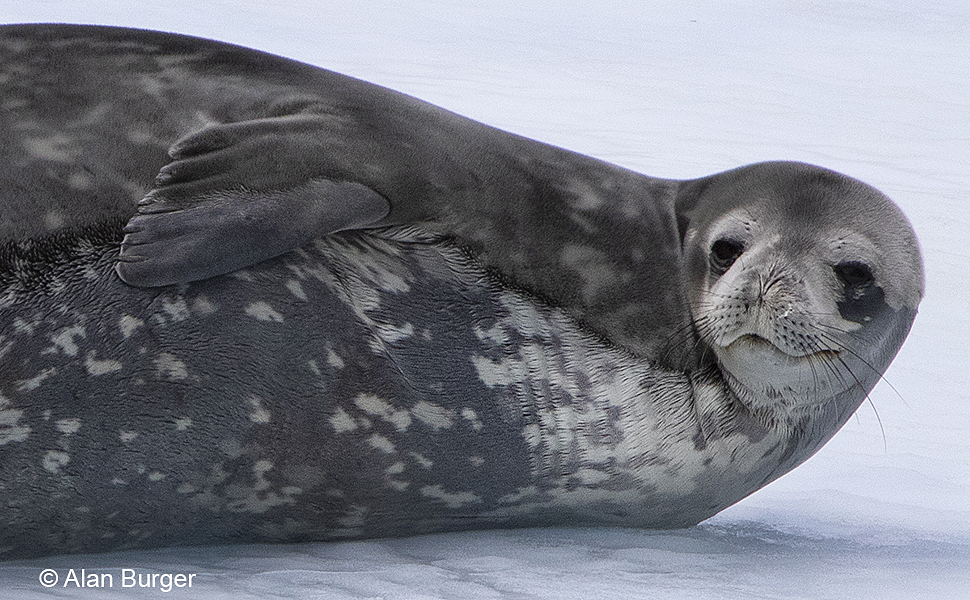 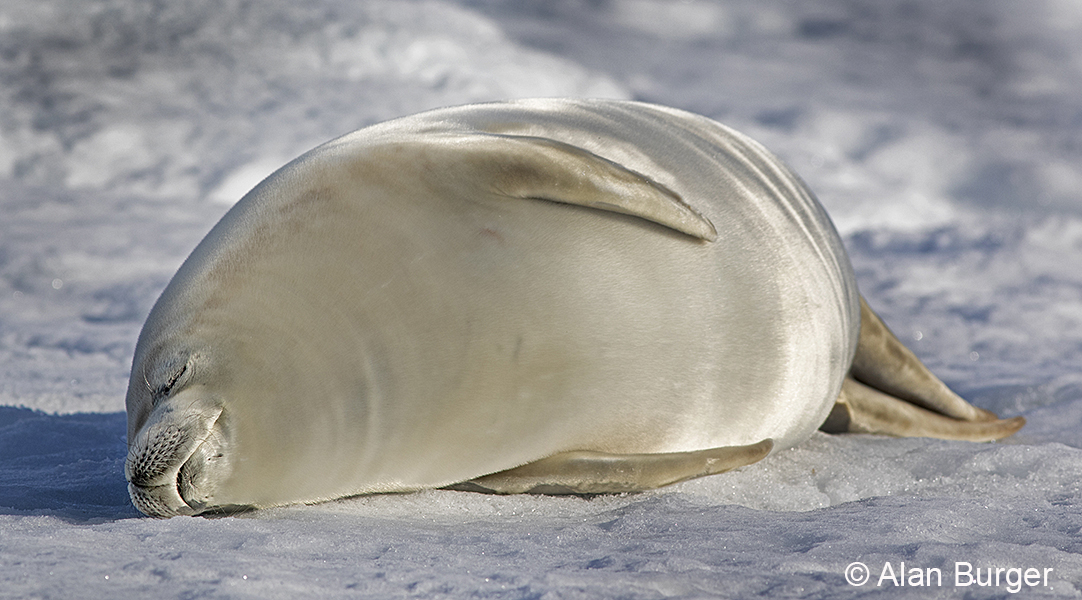 One of the unusual things about our late-summer 2020 visit was to see the huge numbers of salps – both dead and alive in many of the places we visited. Thousands of them. These jelly-like animals are becoming more common in the Antarctic waters as the sea warms with climate change. This is possibly a threat to krill and all the many animals that depend on krill (penguins, seals, whales, fish, squid). Salps and krill are both filter-feeders, living off the blooms of diatom phytoplankton that make the Antarctic waters a rich feeding ground. Salps do well in warmer water whereas krill do not. While krill are a rich food source, salps are about 98% water and few animals feed on them. As salps replace krill the entire Antarctic pelagic food web could be negatively affected. 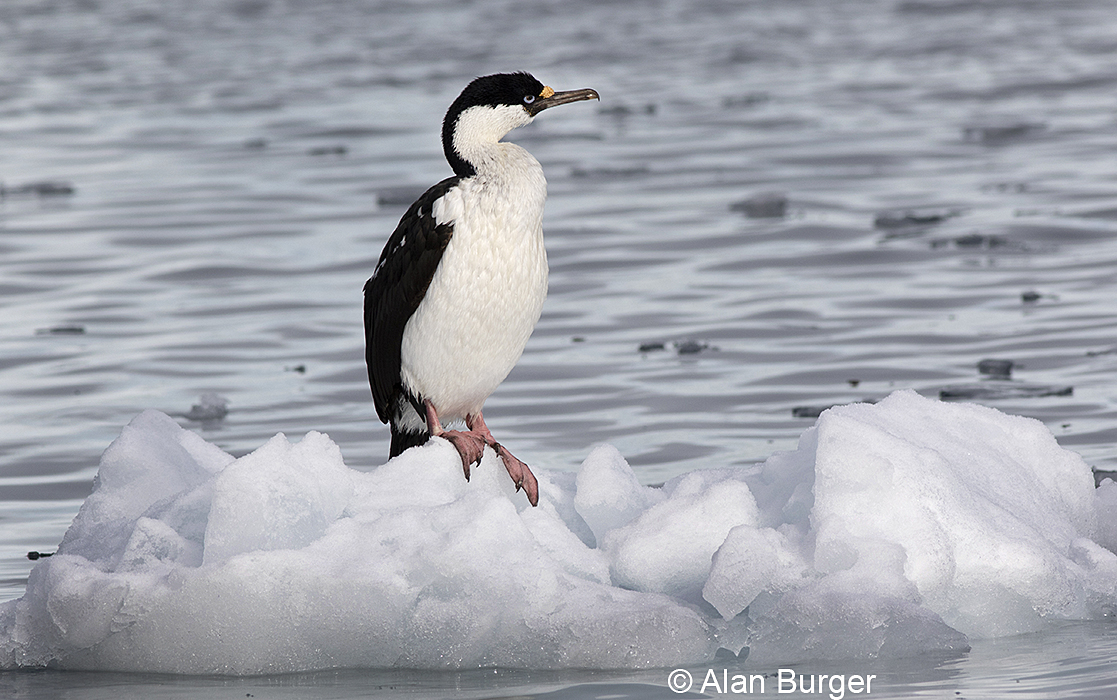 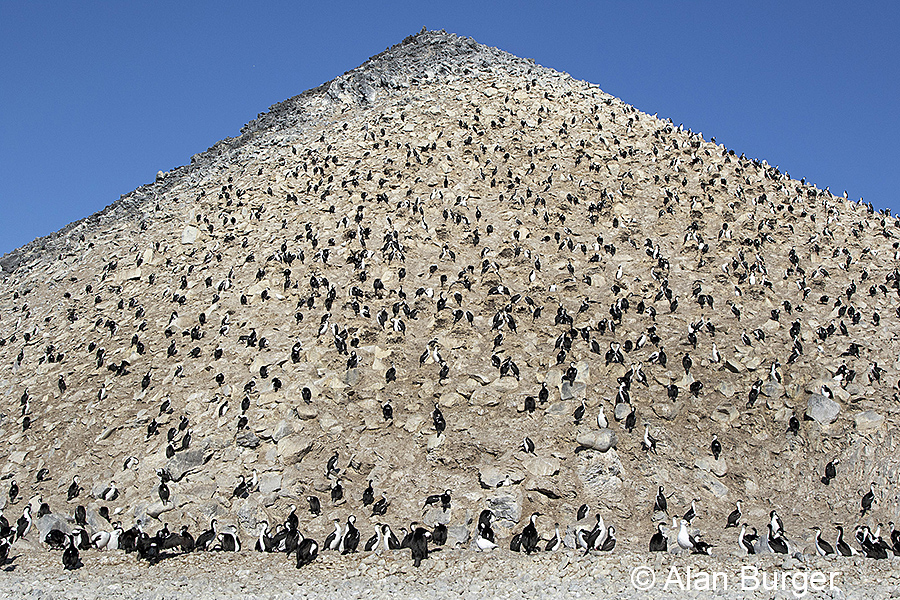 The big cormorant colony on Paulet Island at the north end of the Weddell Sea. © Alan Burger 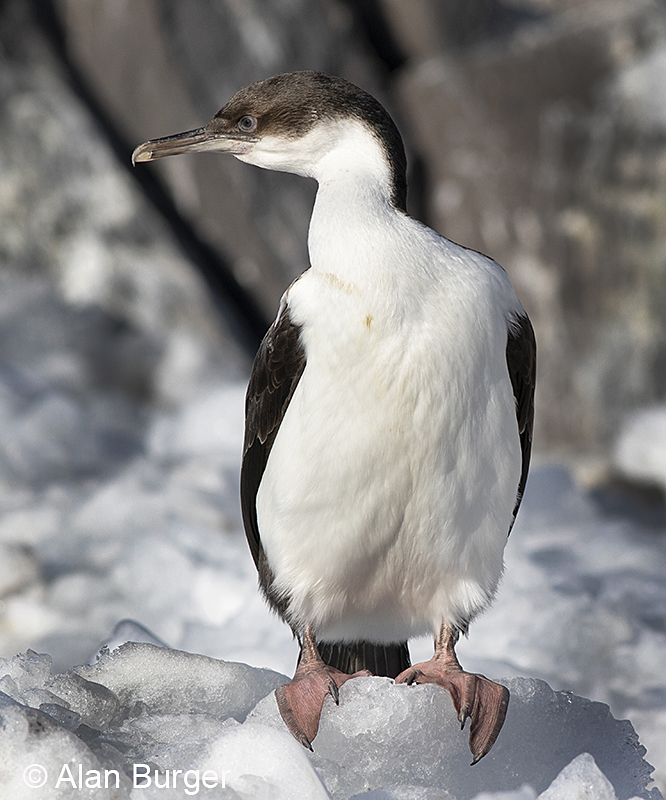 Our late-summer voyages coincided with the time that most of the penguins were moulting. After breeding has ended, adult penguins head out to sea for several weeks to fatten up. They then return to land – usually their breeding colony – and for the next 3 to 3.5 weeks they sit quietly growing new feathers. They live entirely off their fat during this time. The new feathers grow from the same follicles as the old and eventually the old, faded feathers fall off to leave the penguin with a smart new waterproof plumage. 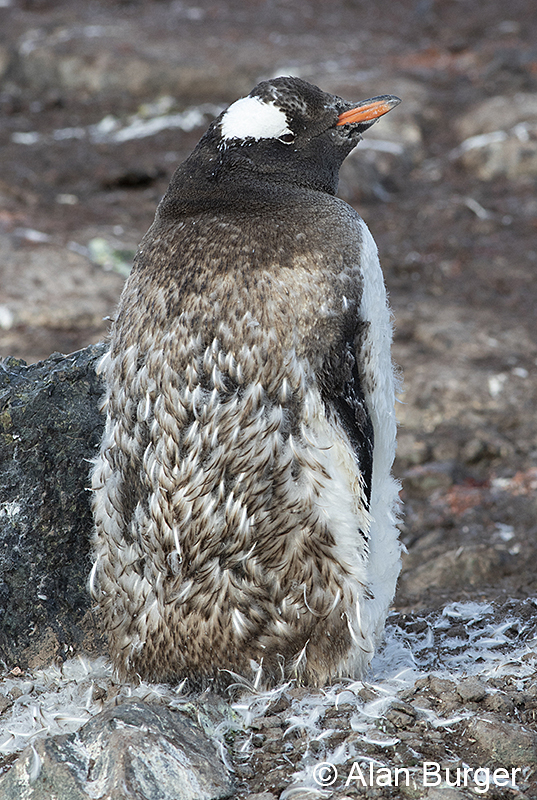 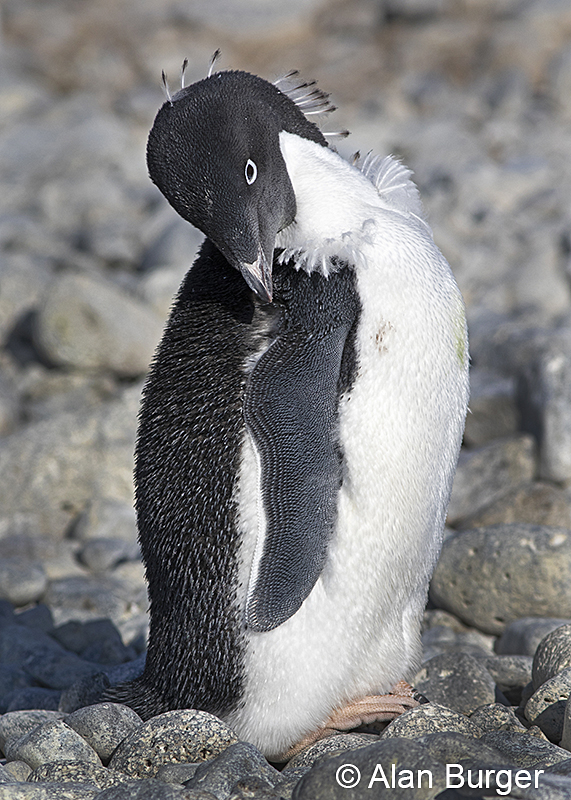 An adult Adélie Penguin near the end of its moult. Just a few faded old feathers remain to fall off. Soon the bird will head off to sea for the winter. © Alan Burger

A pair of Brown (Antarctic) Skuas sharing a piece of penguin. © Alan Burger

I have a particular interest in Sheathbills (Family Chionidae). In the 1970s I studied the Black-faced Sheathbills on sub-Antarctic Marion Island, south of Africa. Here on the Antarctic Peninsula Pink-faced Sheathbills breed. They the only land birds to breed in the Antarctic. Lacking webbed feet and with only marginally waterproof plumage they rely almost entirely on penguins for food – taking eggs and small chicks and feeding on penguin carcasses. They have also evolved a unique method of stealing food from penguins as the adult penguins regurgitate food to their chicks. More on that in another posting. 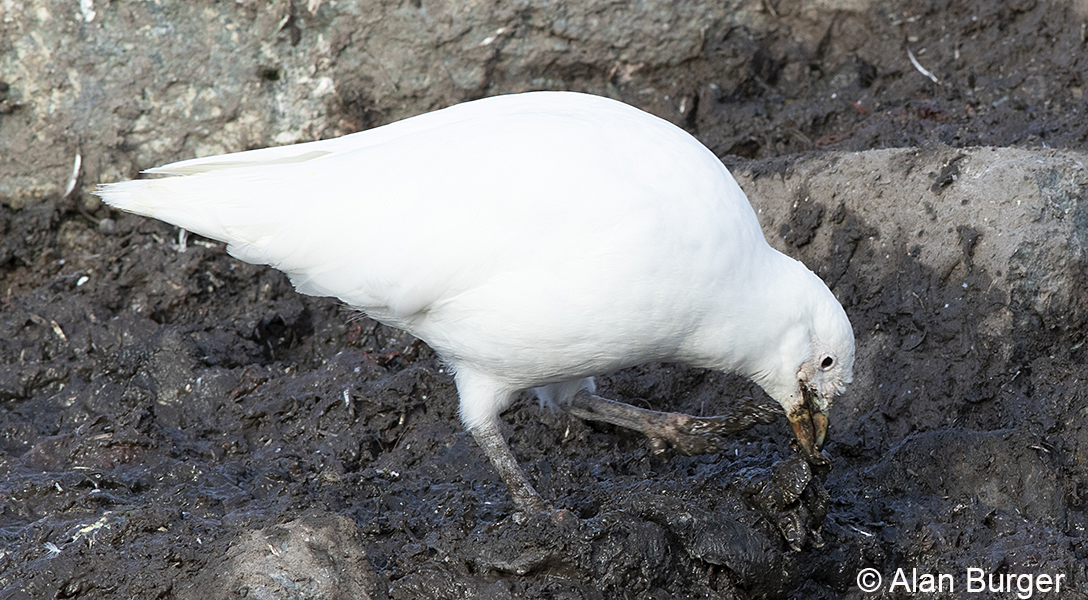 A Pink-faced Sheathbill feeding on a penguin carcass. Sheathbills are the only birds in the Antarctic that are strictly terrestrial and lack webbed feet. © Alan Burger 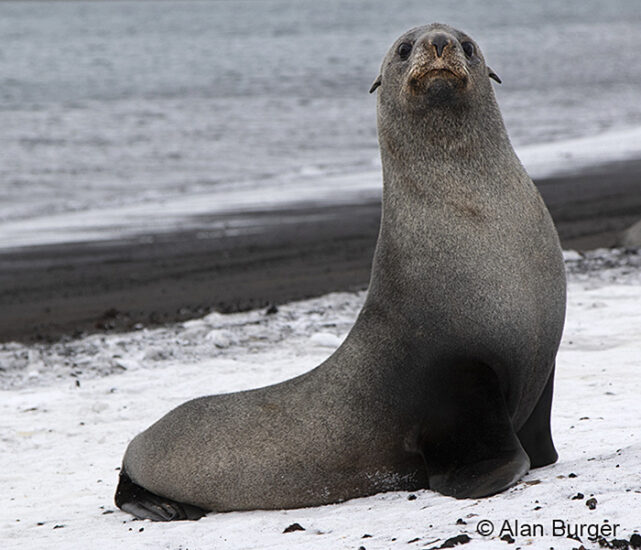 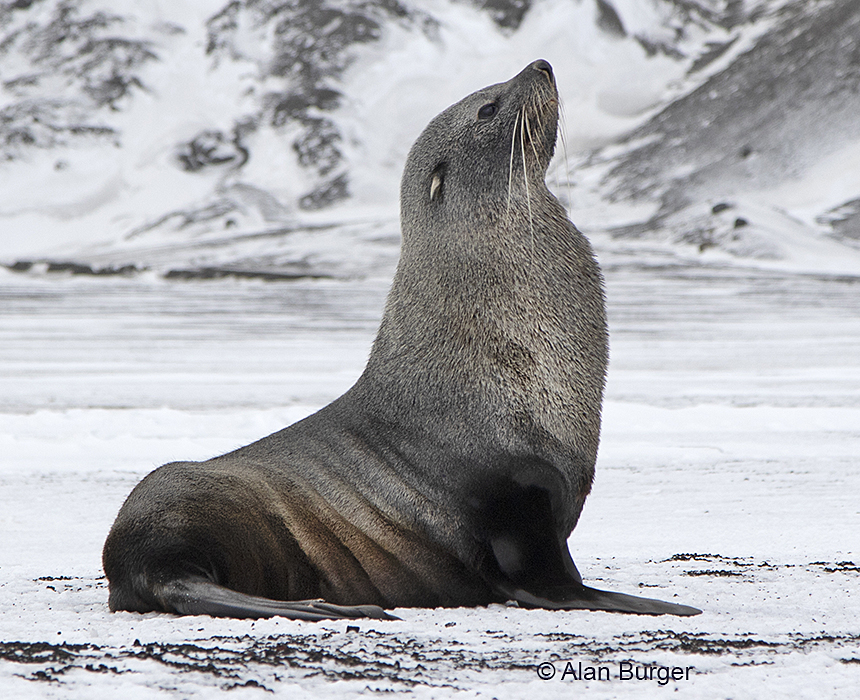 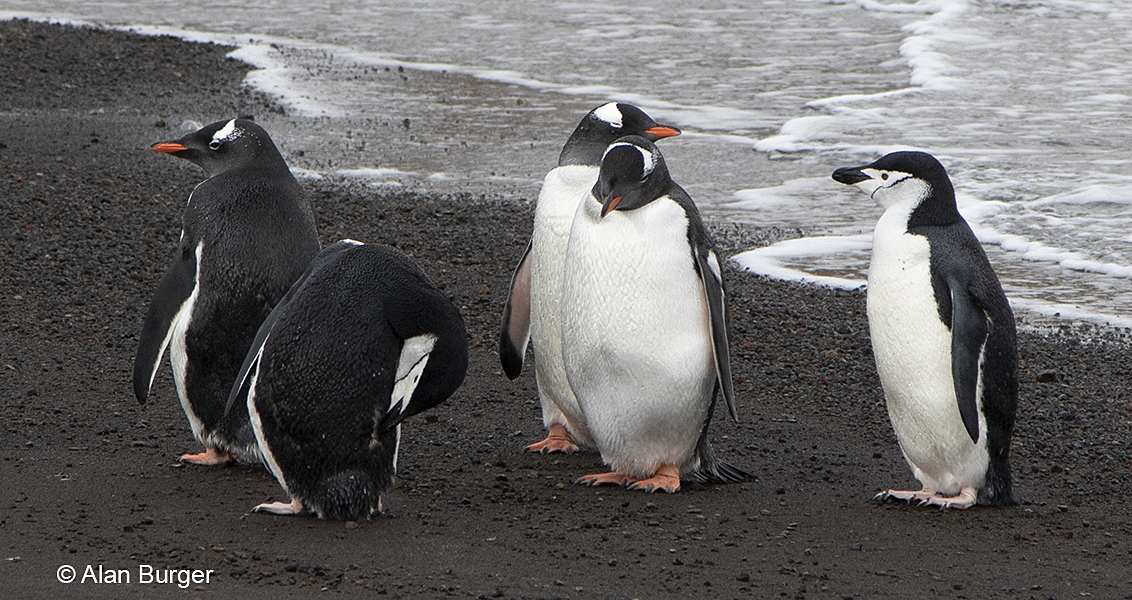 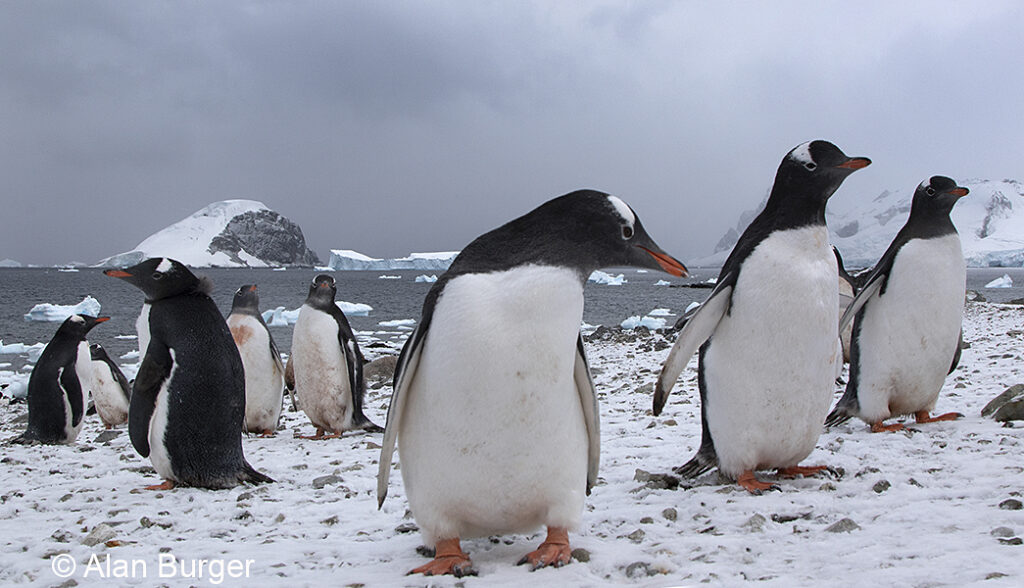 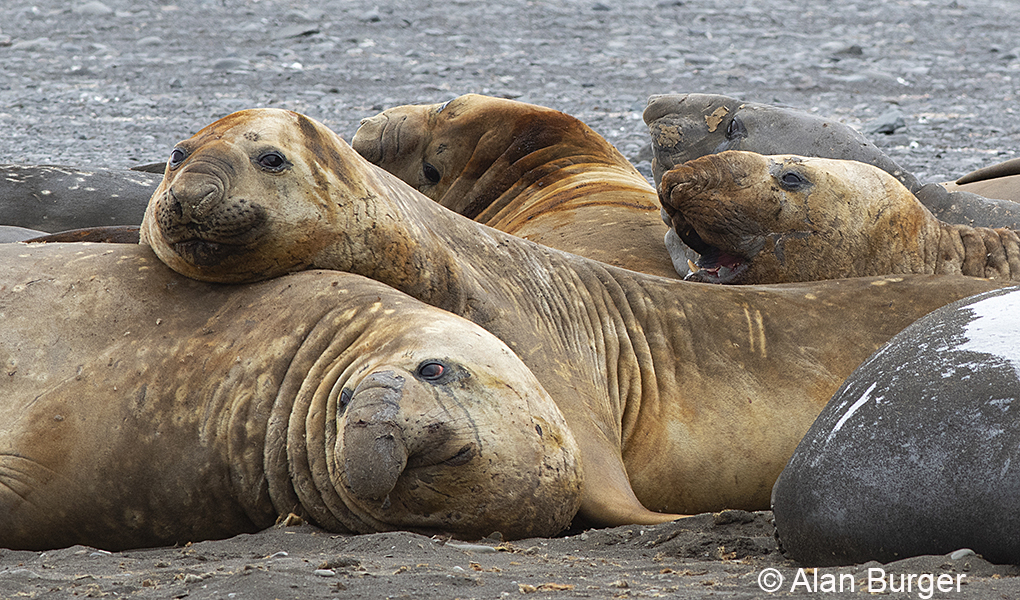 Moulting Elephant Seals at Walker Bay on Livingstone Island in the South Shetland Islands. Like penguins, these seals remain on land for several weeks while they shed their hair and outer skin. © Alan Burger 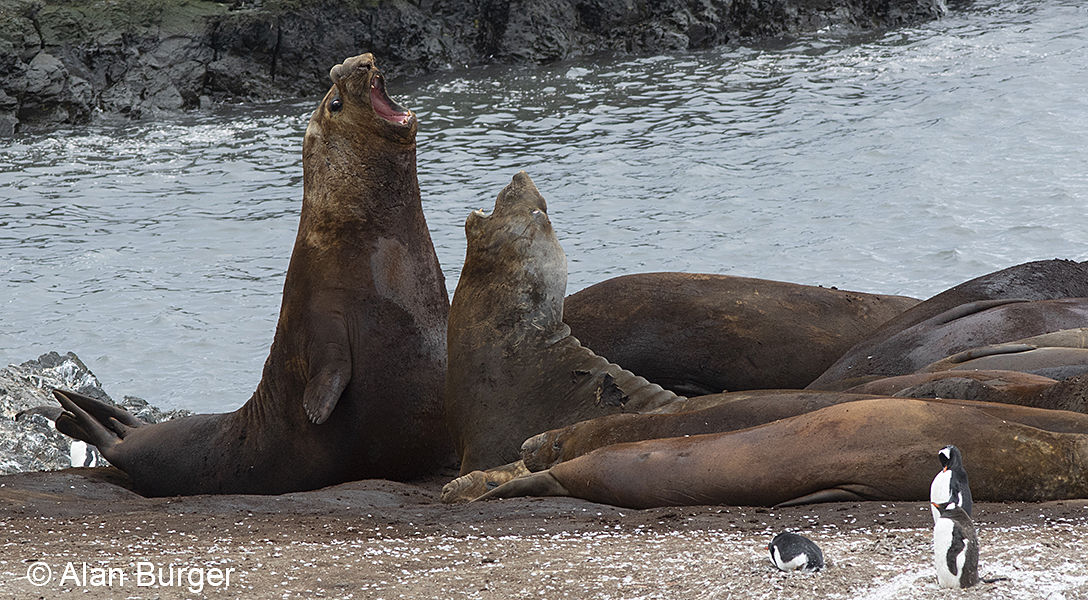 Young male Elephant Seals jousting. At this age this is just play-fighting but in four or five years time they will be fighting in earnest to become a beachmaster and get to breed with the females. © Alan Burger A young male Elephant Seal. He is probably about five years old and has a few years to go before he can become a beachmaster and breed. © Alan Burger 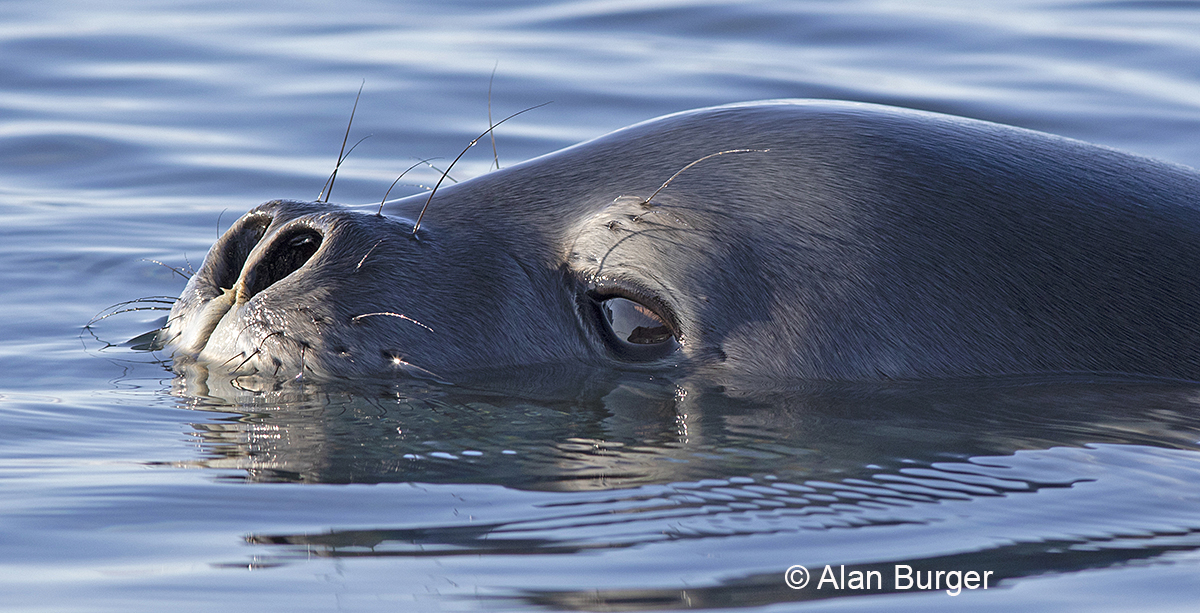 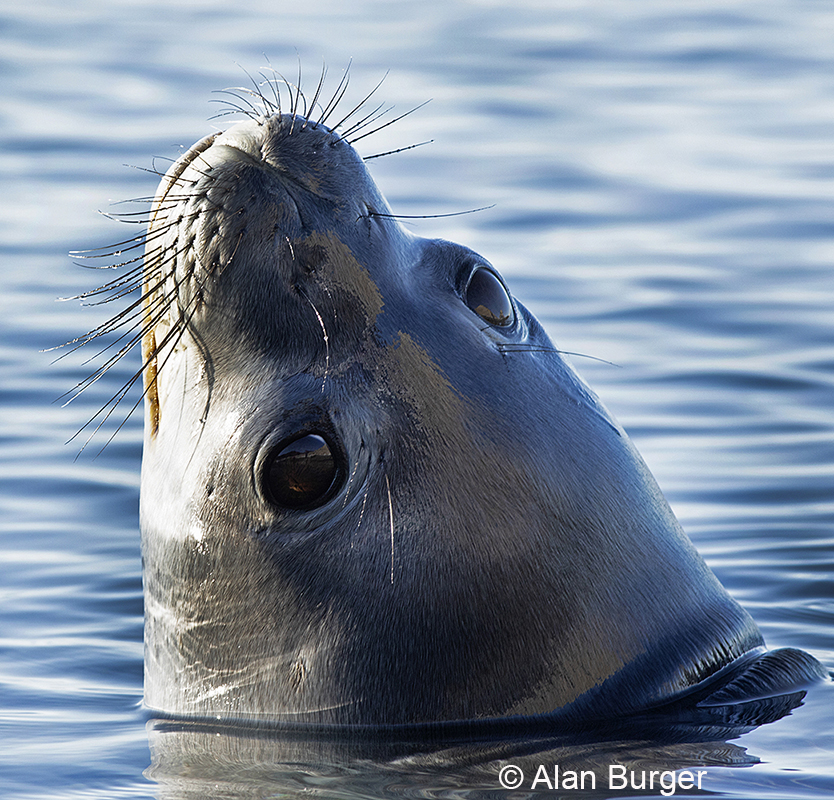 A young Weddell Seal curious to look at me sitting on the shoreline. © Alan Burger