There are two species of sheathbills: 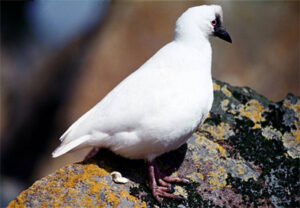 The Black-faced Sheathbill (Chionis minor) is found on four sub-Antarctic island groups in the southern Indian Ocean: Marion and Prince Edward Island; the Crozet archipelago; Keguelen; Heard Island. These populations are year-round residents on these islands and do not migrate.

This is also known as the Lesser Sheathbill but that is a misnomer since they are about the same size as Chionis alba. 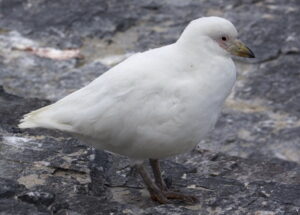 The Pink-faced Sheathbill (Chionis alba) breeds on the Antarctic Peninsula and the islands of the South Shetland, South Orkney, South Sandwich and South Georgia archipelagos. It occurs as a non-breeding migrant on the coast of southern Patagonia and on the Falkland/Malvinas islands. This species has many other names – Snowy Sheathbill, Wattled Sheathbill, American Sheathbill etc. – but Pink-faced is the most accurate and descriptive and is now commonly used. 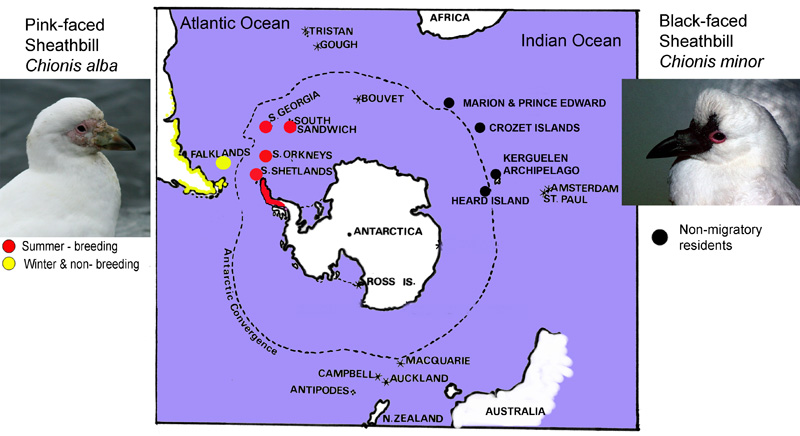 The two sheathbill species have non-overlapping distributions. The Pink-faced Sheathbill breeds on the Antarctic Peninsula and several of the nearby island groups (red marks) and migrates to Patagonia and the Falkland/Malvinas Islands in winter (yellow marks). The four separate island populations of Black-faced Sheathbills are regarded as sub-species and have been genetically isolated for thousands of years. 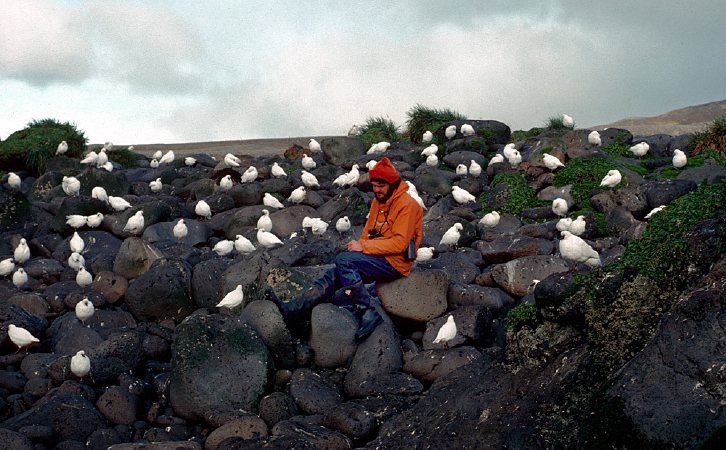 Alan with a flock of Black-faced Sheathbills – Marion Island circa 1975.

My interest in sheathbills began when I spent a year on sub-Antarctic Marion Island in 1973 and subsequently did a PhD studying this population (see publications listed below). Then in 2003 I began doing gigs as a naturalist/lecturer in the Antarctic and became acquainted with the Pink-faced Sheathbills there.

Food and lifestyle of sheathbills

Because they are not seabirds, sheathbills have to be extremely opportunistic in finding food. Basically they will eat almost anything that is organic and will often try out the inorganic (ropes, Zodiacs, gumboots). Most of their food comes from penguins and, to a lesser extent, other seabirds and seals. In seabird colonies they are constantly on the lookout for unguarded eggs or small chicks which they grab and carry off. Much of their food also comes from scavenging bits of flesh off bird and seal carcasses – but being much smaller than the giant petrels and skuas they usually just get the lean pickings off carcasses. They also eat intertidal algae and invertebrates (limpets, polychaete worms) and they can often be seen scraping algae off the rocks with their beaks. Black-faced Sheathbills also eat large quantities of terrestrial invertebrates (earthworms, insect larvae, beetles) and these foods are particularly important in the winter when there are few seabirds remaining on the islands.

Although they are food generalists, the one thing that both species of sheathbills specialize in is kleptoparasitism, i.e., robbing other animals of their food. Penguins that are feeding chicks are their main targets. The sheathbills will stand near a penguin that has come in from the sea with a belly full of food to deliver to its chick. As the penguin regurgitates the food bolus to the chick, the sheathbill will attack. It leaps against the penguins, fluttering it wings, and often thumps against the penguin chick with enough force to topple the chick over. With any luck, some of the food which the penguin was regurgitating will spill on the ground and the sheathbill will then scoop this up – either to eat or to carry to its nest to feed its own chick. In a study I did years ago on sub-Antarctic Marion Island, Black-faced Sheathbills living in colonies of Rockhopper Penguins obtained over 90% of the food delivered to their chicks by robbing the neighbouring penguins. Throughout their range, kleptoparasitism coupled with opportunistic scavenging is the key to sheathbills’ survival in some very hostile environments.

Here a Black-faced Sheathbill is attacking a Rockhopper Penguin as it feeds its chick on  Marion Island. The sheathbill is hoping that some food will spill and become a sheathbill meal. 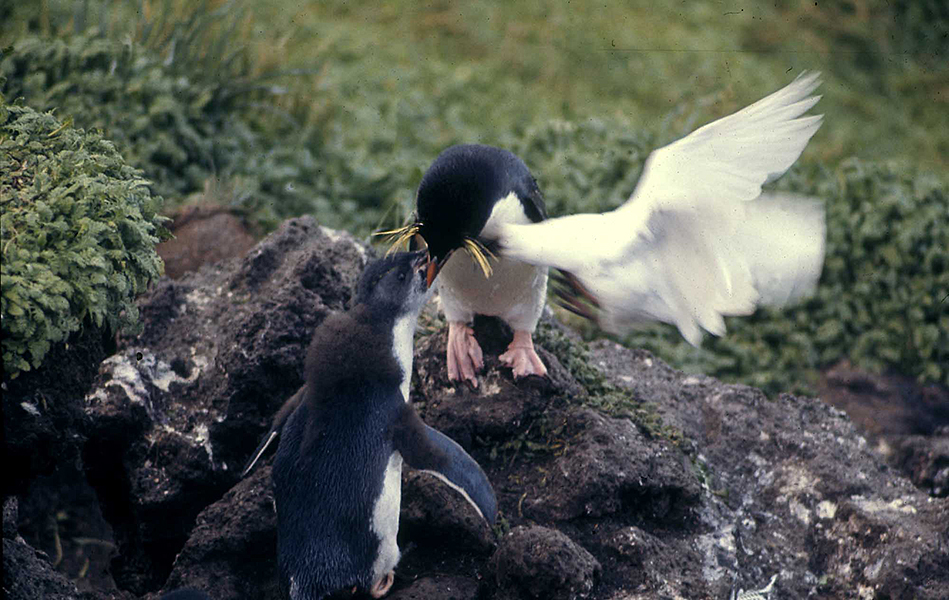 And Pink-faced Sheathbills doing the same thing with Adélie Penguins in the Antarctic. 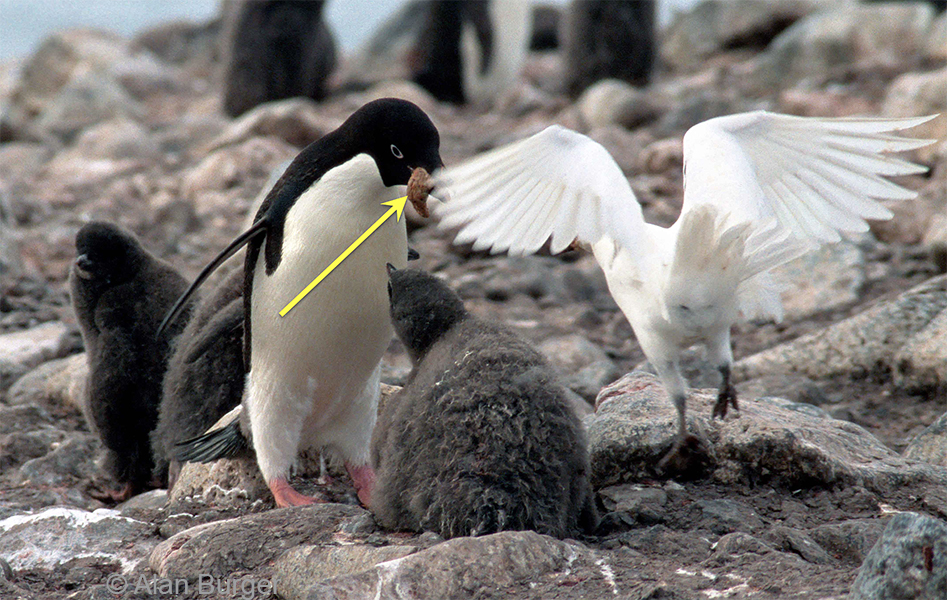 A Pink-faced Sheathbill making a successful attack on an Adélie Penguin. The arrow indicates the bolus of krill that will fall to the ground and be picked up by the sheathbill. Photo: © Alan Burger

Here is a complete sequence of a Pink-faced Sheathbill robbing a Gentoo Penguin. 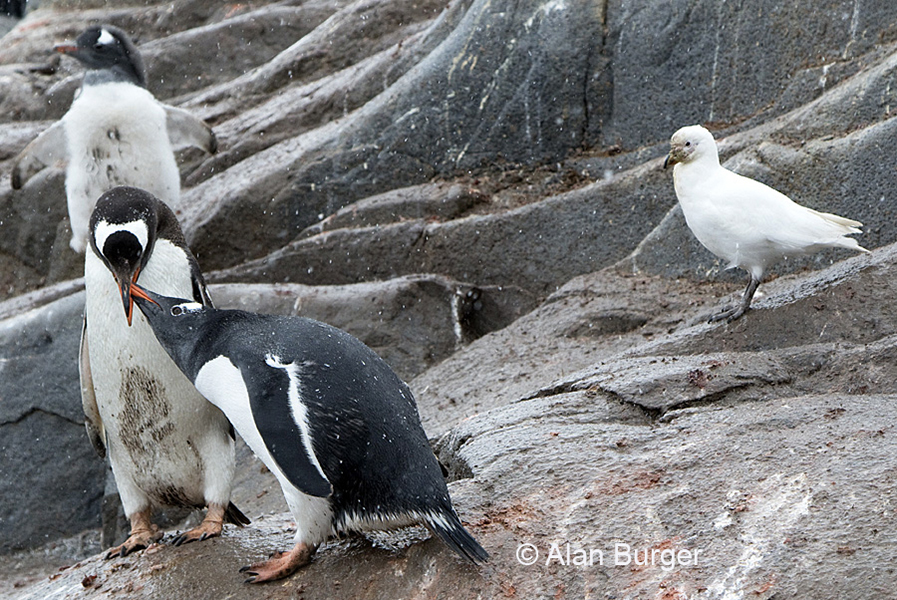 The sheathbill is attracted to an adult penguin about to deliver food to an almost full-grown chick. Photo: © Alan Burger 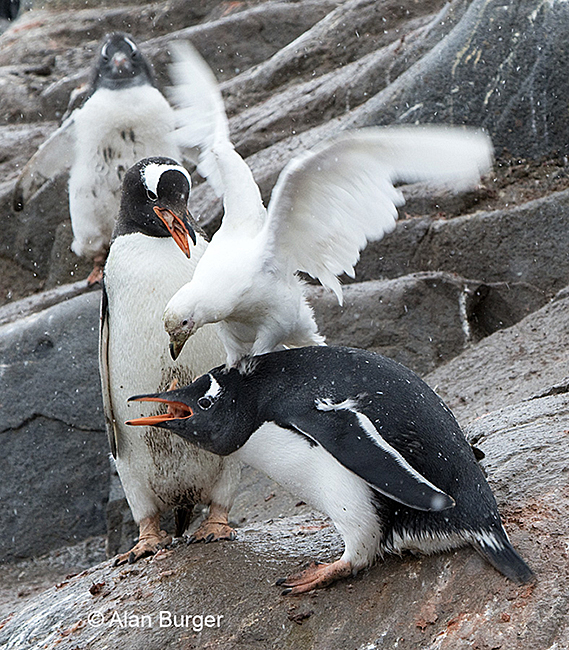 As the adult penguin regurgitates a bolus of krill the sheathbill strikes. Notice the orange krill spilling. Photo: © Alan Burger 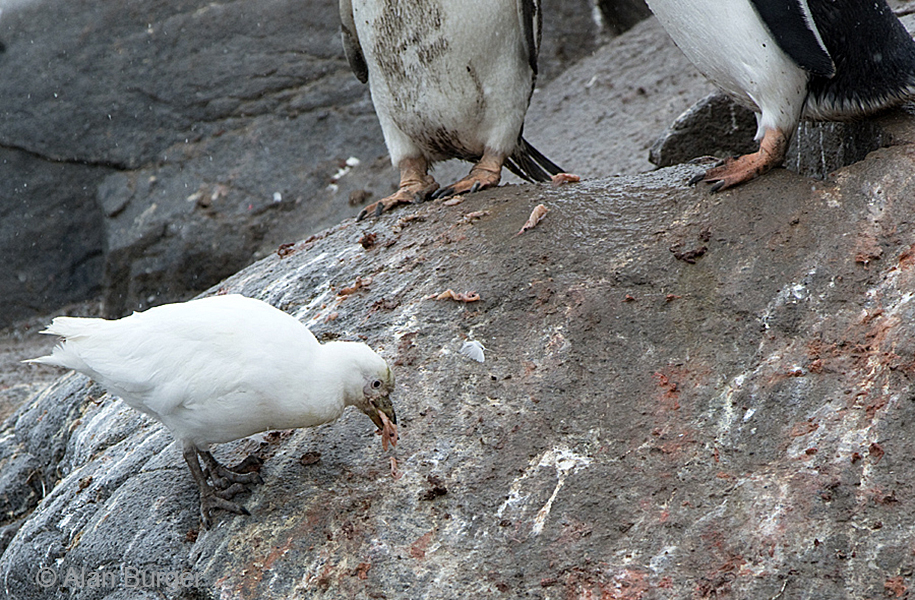 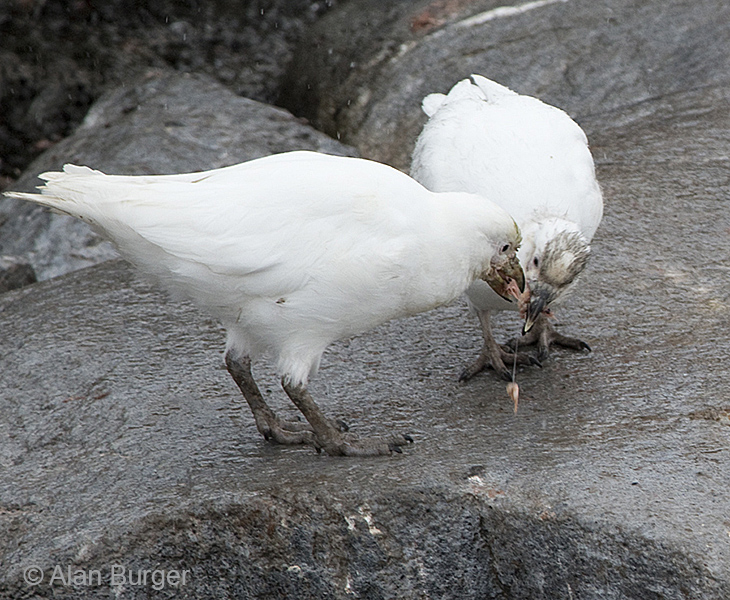 And feeds it to its own chick. Photo: © Alan Burger

Other seabirds are occasionally kleptoparasitized too. On Marion Island one pair of Black-faced Sheathbills had a nest among nesting Sooty Albatrosses. Here is one of these sheathbills taking food from an albatross as it feeds its chick. In the photo to the right you can see the sheathbill’s own chick standing at the entrance to its nest cavity, just below the albatross nests. Whenever possible sheathbills will nest right among their hosts. 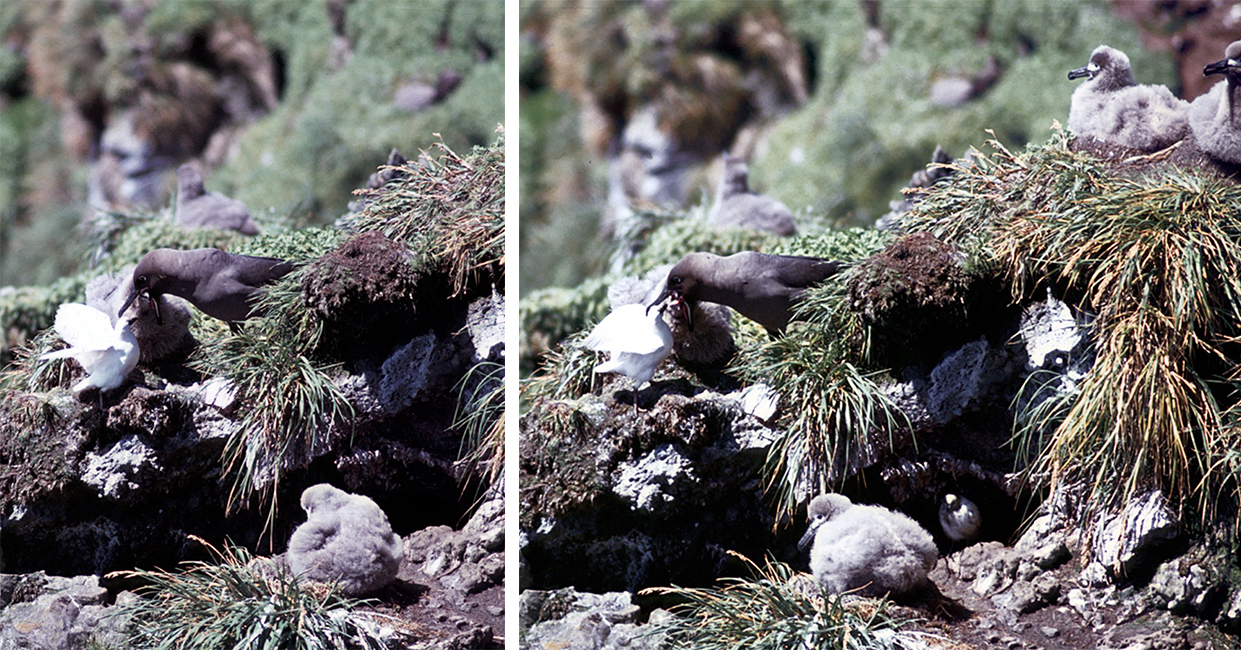 A Black-faced Sheathbill stealing food from a Sooty Albatross as it feeds its chick – Marion Island. Photos: © Alan Burger

It is not just seabirds that are robbed. When Elephant Seals are nursing their pups, sheathbills will sometimes peck the milk off the lips of the pups. This Black-faced Sheathbill has its bill right in the action – taking drops of rich milk as the pup nurses.

And of course humans are not immune to kleptoparasitism either.
Here’s one stealing my lunch! …………………………….. and another trying to eat my gumboot.

Around penguin colonies sheathbills also use a wide range of foods. Being smaller than skuas, gulls and giant petrels they can move among the penguins without evoking much aggression from the penguins. This gives them access to poorly guarded eggs …… 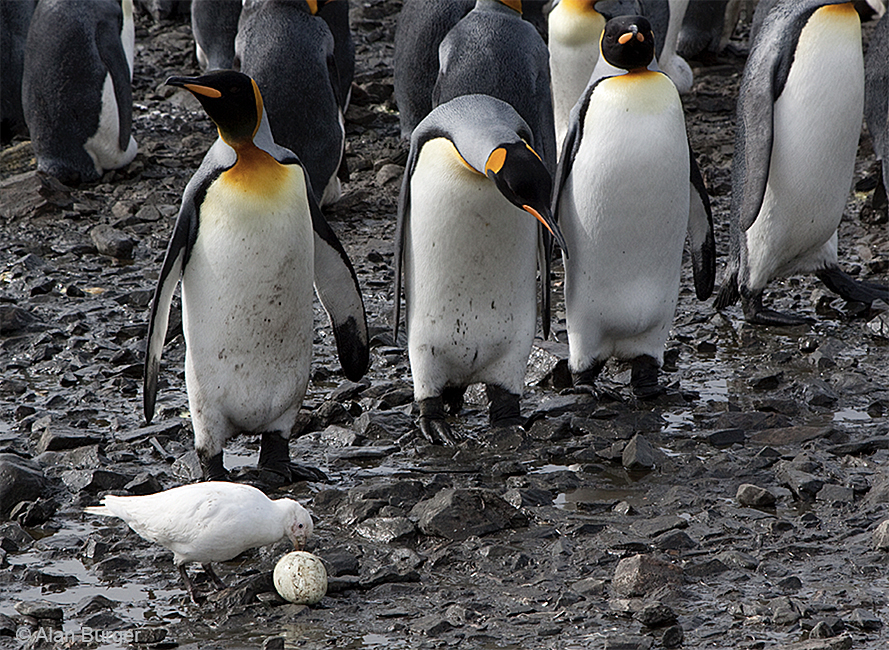 A Black-faced Sheathbill snatches a small King Penguin chick and eats it. The bill of the bereft King Penguin parent is visible in the first photo. Marion Island. Photos: © Alan Burger 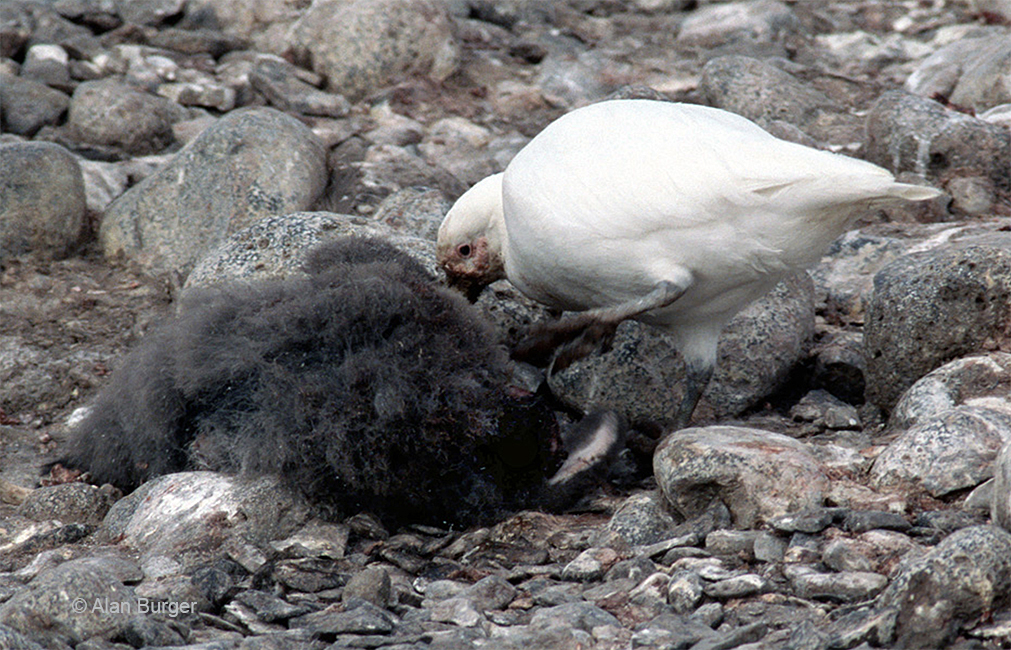 Much of the food that sheathbills get consists of scraps of meat taken off carcasses that have already been worked over by the bigger scavengers – giant petrels, skuas and gulls.

And they are not too fussy about eating penguin poop either. It seems that penguins eating krill do not fully digest this prey type, leaving some nourishment for the sheathbills.

Both species also regularly forage along the shoreline, taking limpets, other invertebrates and algae. Sheathbills have enlarged intestinal caecae (blind sacs) which improve their ability to digest algae.

A group of Pink-faced Sheathbills foraging on the South Georgia rocky shoreline (left) and a sheathbill foraging on the relatively barren intertidal of the Antarctic Peninsula (right). Photos: © Alan Burger

At Deception Island the volcanically-warmed water sometimes kills krill and other marine creatures that then wash up on the beach. Sheathbills have learned that this is a great place to forage – when the beach is steaming, there is a krill feast available. 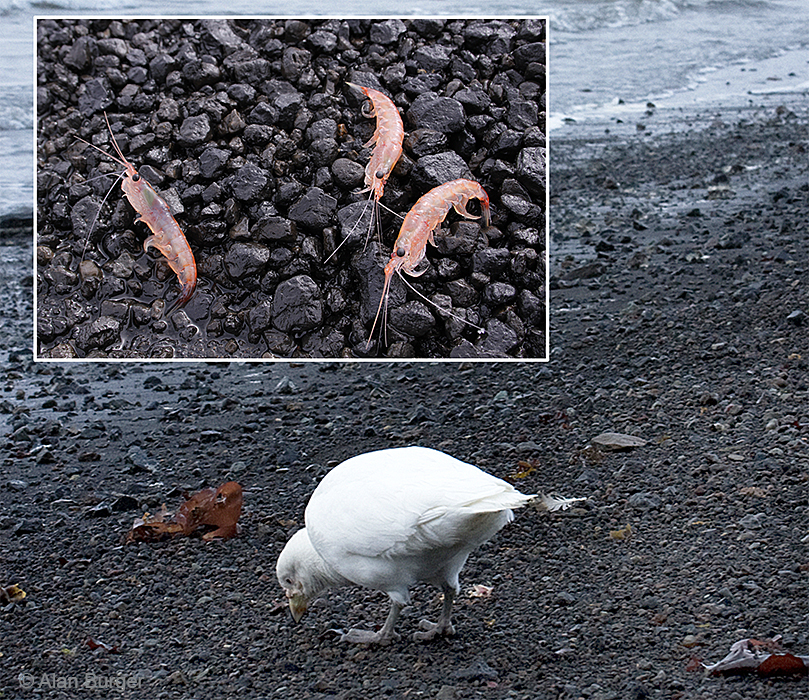 At volcanic Deception Island a Pink-faced Sheathbill picks up par-boiled krill and other marine creatures that wash up on the beach. Inset shows some of the cooked krill on the beach. Photos: © Alan Burger

The sub-Antarctic islands where the Black-faced Sheathbills live have less severe winters than in the Antarctic, and these islands are too remote to allow sheathbills to migrate elsewhere. So they have to make do with whatever food they can find through the winter. Most of the penguins are gone, but colonies of King Penguins, which have chicks all year round, do provide some foraging opportunities. Many sheathbills also forage along the shore. But the bulk of the sheathbills on Marion Island forsake the barren penguin colonies and go inland – foraging for earthworms, caterpillars of the flightless moths, small beetles and other terrestrial invertebrates. Sampling during my PhD study showed that the bogs and grassy hummocks support a surprisingly high density of these invertebrates. The sheathbills probe into the soft bogs and pull out chunks of moss to expose the invertebrates. At this time adults also give up being territorial and form flocks to forage and roost – showing great flexibility in both foraging skills and social behaviour.

During winter on Marion Island many Black-faced Sheathbills forage for terrestrial invertebrates in the tundra-like vegetation on the coastal plain. Notice that the bird on the right is banded – one of my 1970s study birds. Photos: © Alan Burger

Territoriality and Breeding in Sheathbills

Both species have very similar displays, pair-bonds, territoriality while breeding, and nesting habits. Adults form strong pair-bonds and will generally breed with the same mate in the same nest and territory if they both survive until the next season. 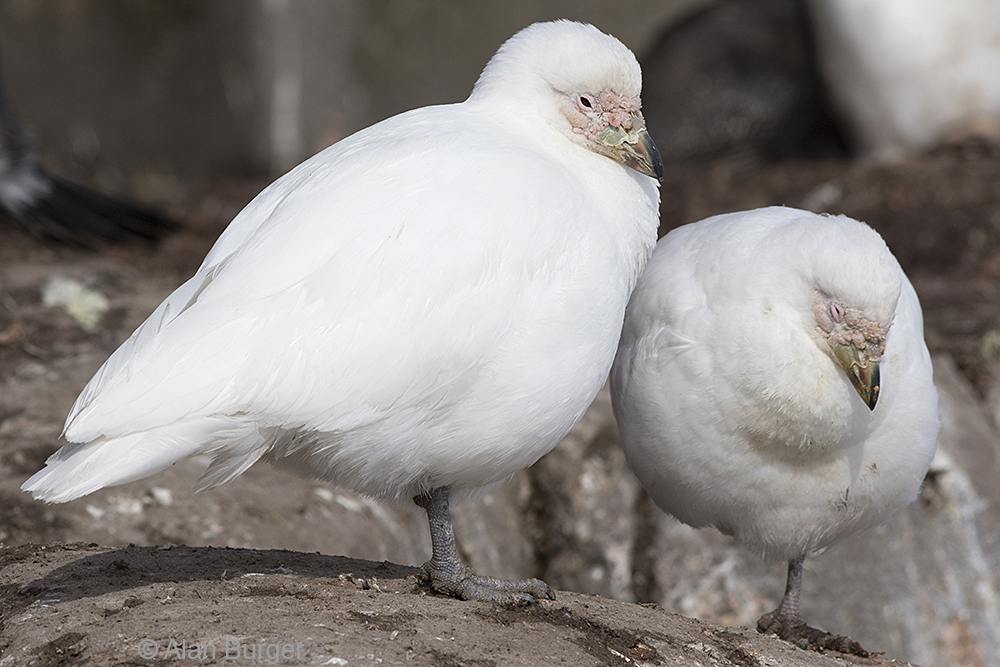 A pair of adult Pink-faced Sheathbills. Males tend to be slightly larger than females (male on the left). They often rest with one leg tucked into the belly plumage. Photo: © Alan Burger

In both species the usual pair display consists of both birds bowing their heads up and down while calling. They may also peck at the mate’s beak. 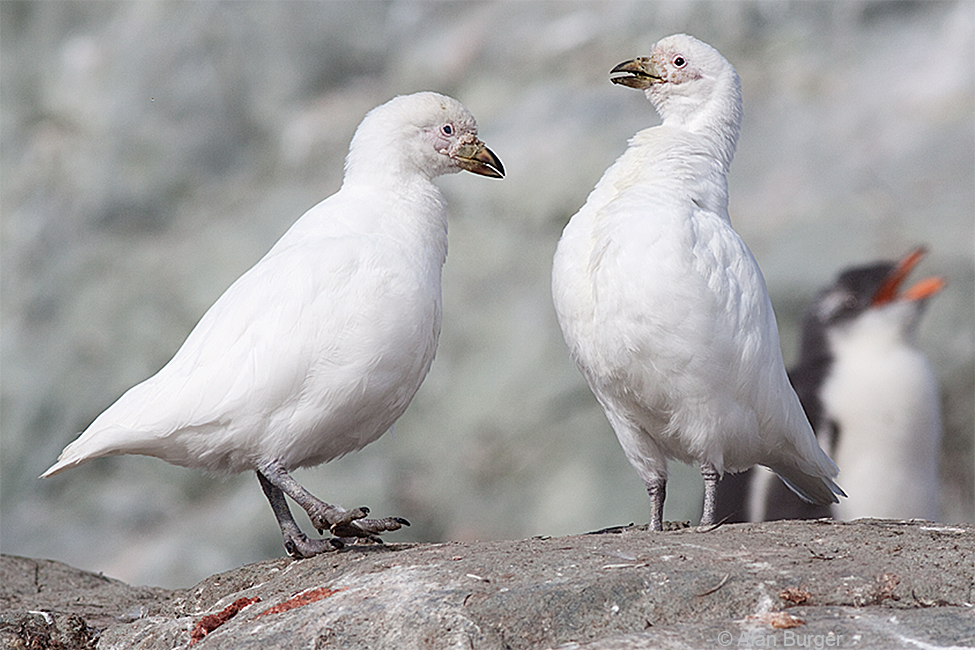 A pair of Pink-faced Sheathbills giving a bowing pair display. Both birds bow their heads up and down while calling.  Photo: © Alan Burger

Territories nearly always include breeding penguins or occasionally other seabirds like cormorants or albatrosses. Males tend to do most of the territorial defence; this is done primarily by giving a ritualized threat posture but there are also chases to expel intruders.

The usual threat posture in Black-faced (left) and Pink-faced Sheathbills (right) – most often given by the male. The facial caruncles and enlarged bill sheath enhance the visual impact of these displays. Photos: © Alan Burger

If neighbouring breeders meet at the boundary of their territories, there is usually a bout of ritualized posturing – crouching down facing the neighbour, jabbing at the ground and bill-wiping.

Occasionally these boundary encounters break out into a brief fight, with the birds whacking each other with the blunt spurs on their wings and pecking.

Fighting by neighbouring male Black-faced Sheathbills. This involves beating with the wings and pecking, interspersed with upright posture. Notice the small black carpal spur on the wing. Photos: © Alan Burger

Nests are in cavities under rocks – this gives them some protection from the harsh weather and predatory skuas. Nests are often surrounded by the penguins or other seabirds that provide sustenance, or occasionally on a rocky outcrop near the foraging territory. In both species the breeding adults drag a messy pile of penguin feathers, eggshells, limpet shells and other debris into the nest cavity and at the entrance.

In both species the typical clutch is 2-3 eggs but usually only one chick is raised. Both parents take turns incubating the eggs and feeding the chicks. Incubation is 28-31 days.  The chicks are brooded almost continuously in the nest for the first 10-14 days and less after that. Chicks begin to venture out from the nest cavity when still downy at about 2-3 weeks of age. Parents deliver food in their beaks to the chicks – at or near the nest for the first 50 days and then elsewhere in the territory until the chicks are about 2 months old.

Stages in the development of Pink-faced Sheathbill chicks, at roughly 14, 21 and 40 days of age. Photos: © Alan Burger

There have been more detailed studies of Black-faced Sheathbills than Pink-faced, even though thousands of visitors to the Antarctic and South Georgia see the latter species every year. To increase knowledge of the nesting of the Pink-faced I have documented nests during my Antarctic visits. Photos of these nests are available here:  PFSH nests. 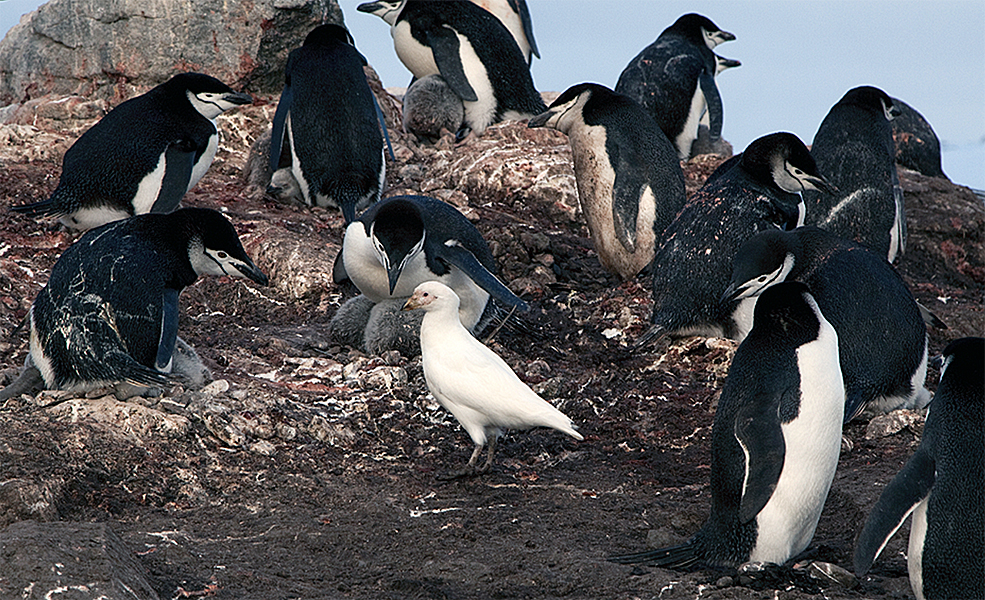 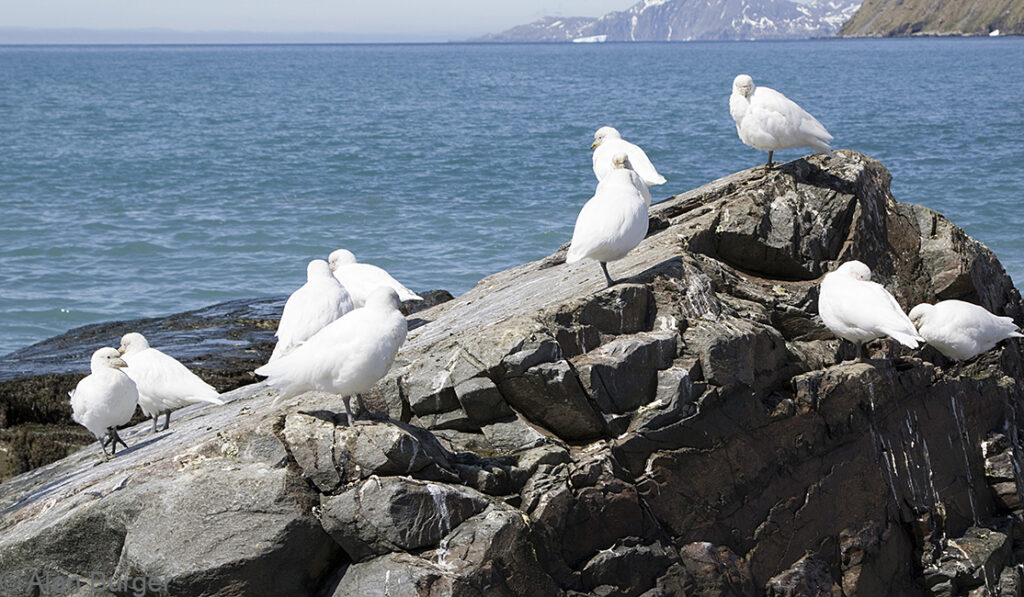 Pink-faced Sheathbills at a day roost, South Georgia. Non-breeding birds and immatures tend to roost in groups by day and at night. Photo: © Alan Burger

I did my PhD on Black-faced Sheathbills based on work at Marion Island in the sub-Antarctic. Here are publications from that work and related work on the island’s terrestrial invertebrates: