Between 23 and 30 August, Andrea and I spent several days kayaking in the southern Gulf Islands, based with friends on Salt Spring Island. One day took us past Wallace Island to Galiano Island and then a loop through the southern Secretaries Islands. Another day up to Thetis Island via the Secretaries and Penelakut Island. A third day around Ganges Harbour and Long Harbour. Here are some photos of the wildlife seen from the kayak. It was fairly quiet for seabirds and shorebirds but we did have a few interesting sightings. 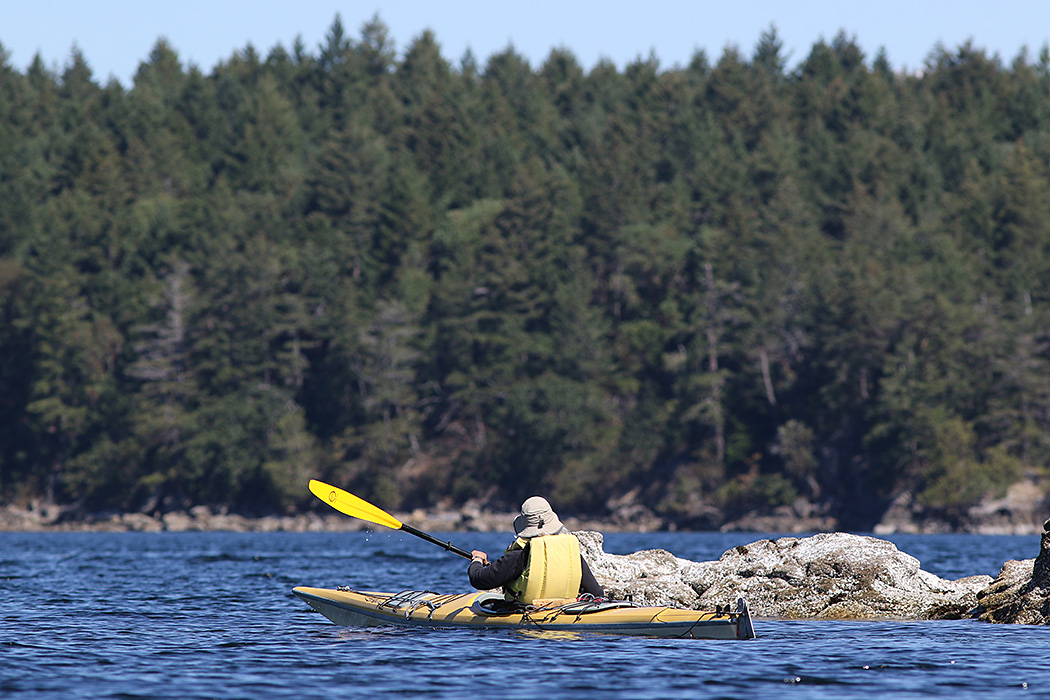 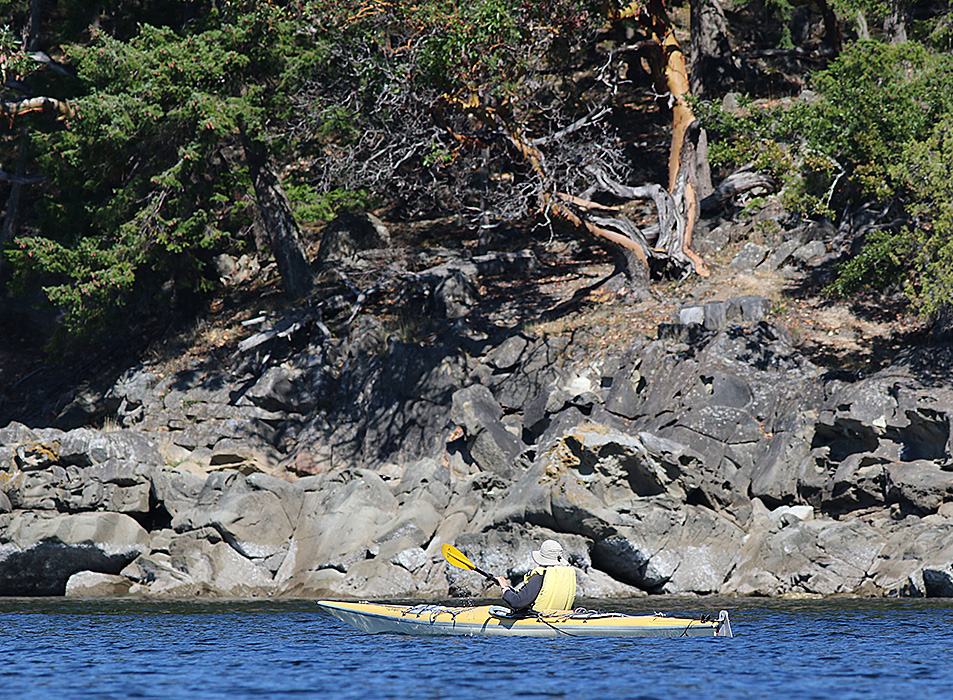 We mostly passed by rocky shores, often with the beautiful Arbutus trees growing near the tideline. ©Alan Burger

Glaucous-winged Gulls, which breed in this area, were our constant companions. ©Alan Burger 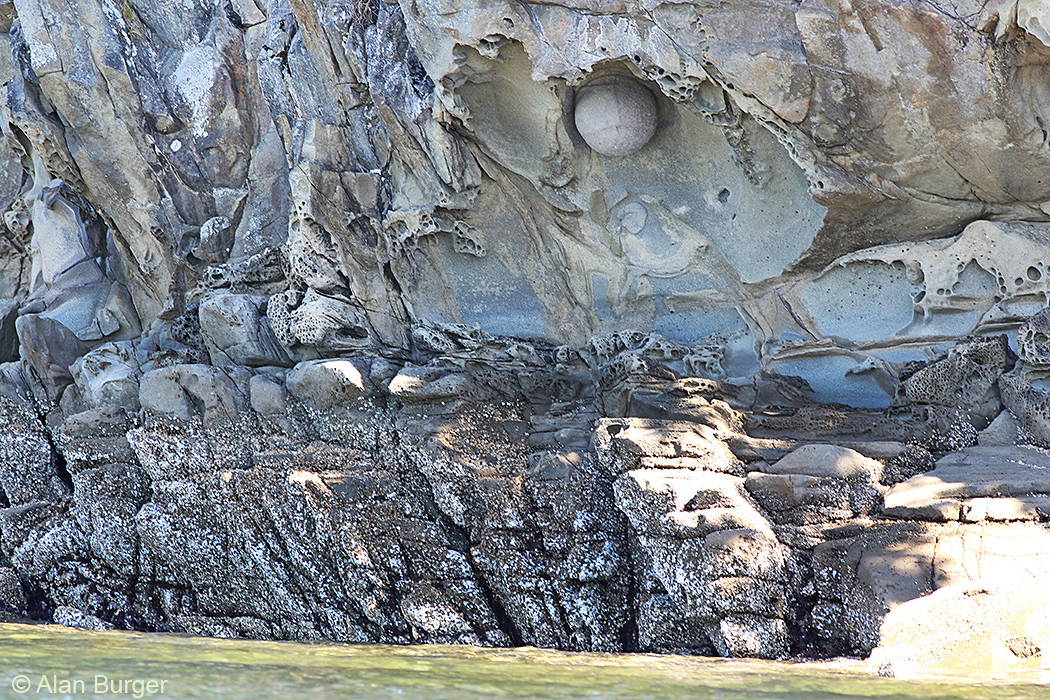 The sandstone in these islands erodes near the tideline to produce wonderful natural sculptures. The round “ball” in this photo is bigger than a person’s head. ©Alan Burger 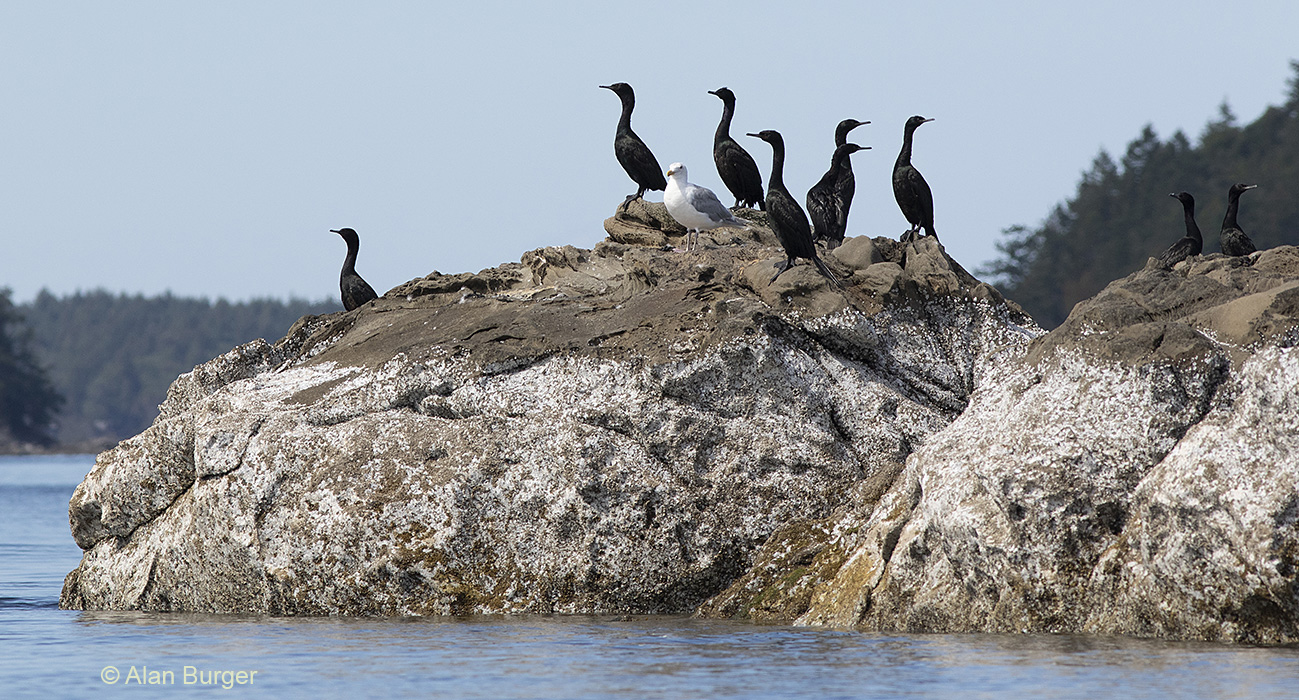 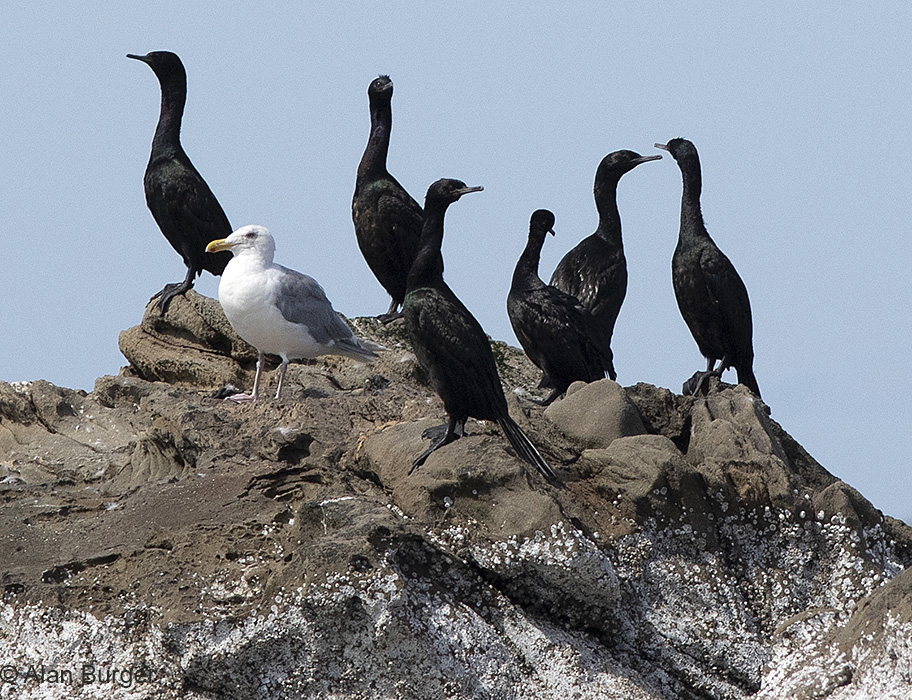 A closer look at the Pelagic Cormorants and Glaucous-winged Gull.© Alan Burger 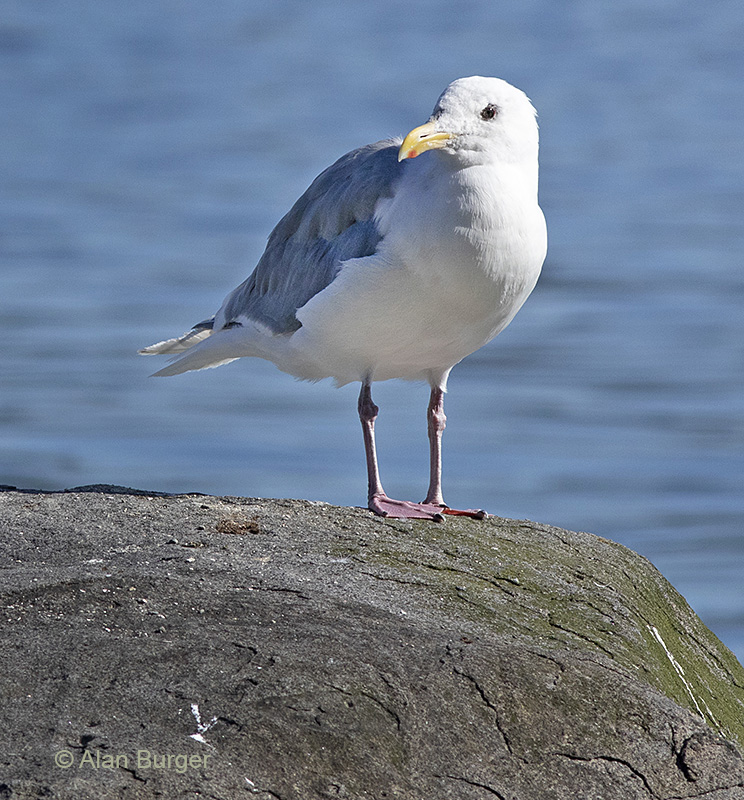 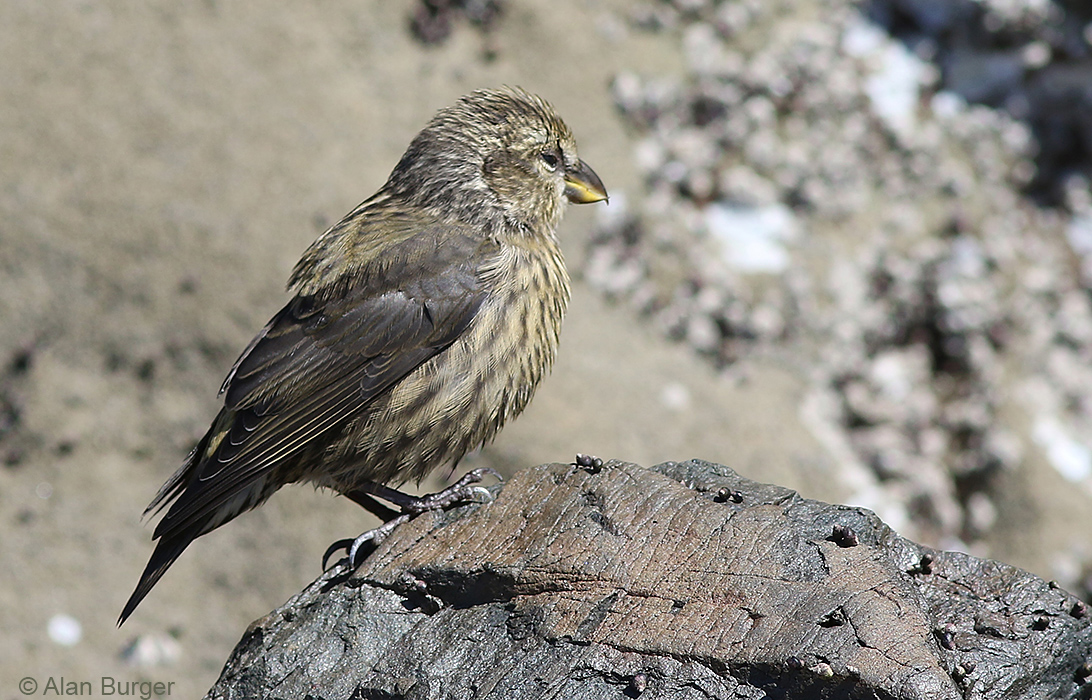 We were surprised to find a small group of Red Crossbills down at the waterline pecking at something in the intertidal zone. Maybe after salt? A big change from their usual treetop habitat. This is a juvenile bird, hatched this past summer. © Alan Burger 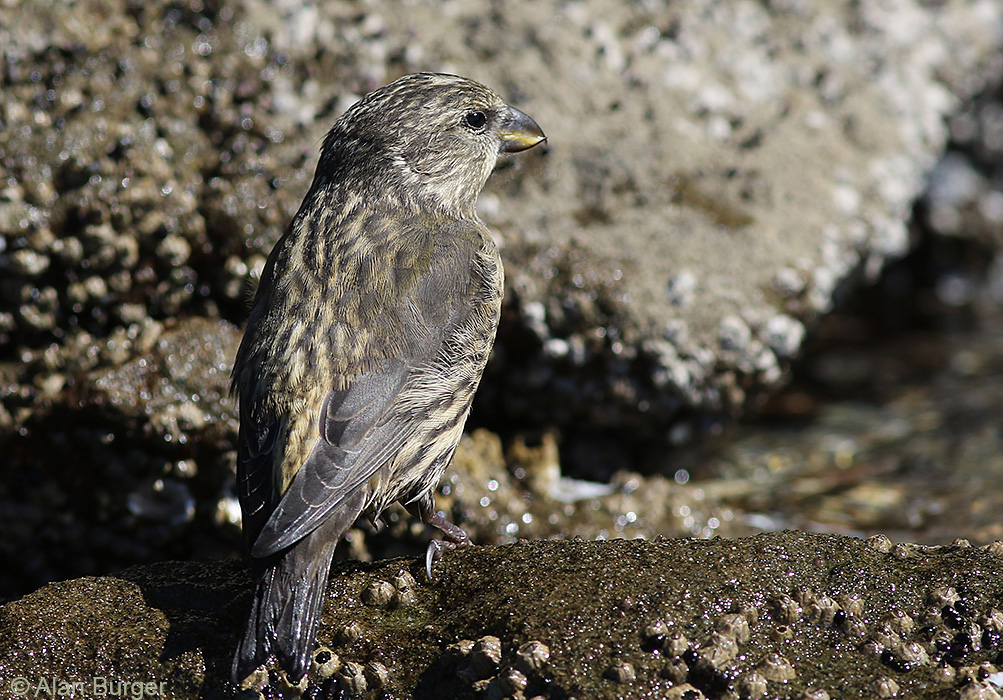 An intertidal Red Crossbill – note the unusual crossed bill of this species, an adaptation for extracting seeds from conifer cones. These local birds specialized on Douglas-fir seeds. This is another juvenile bird – notice how wet the tail feathers are from standing right at the waterline. © Alan Burger 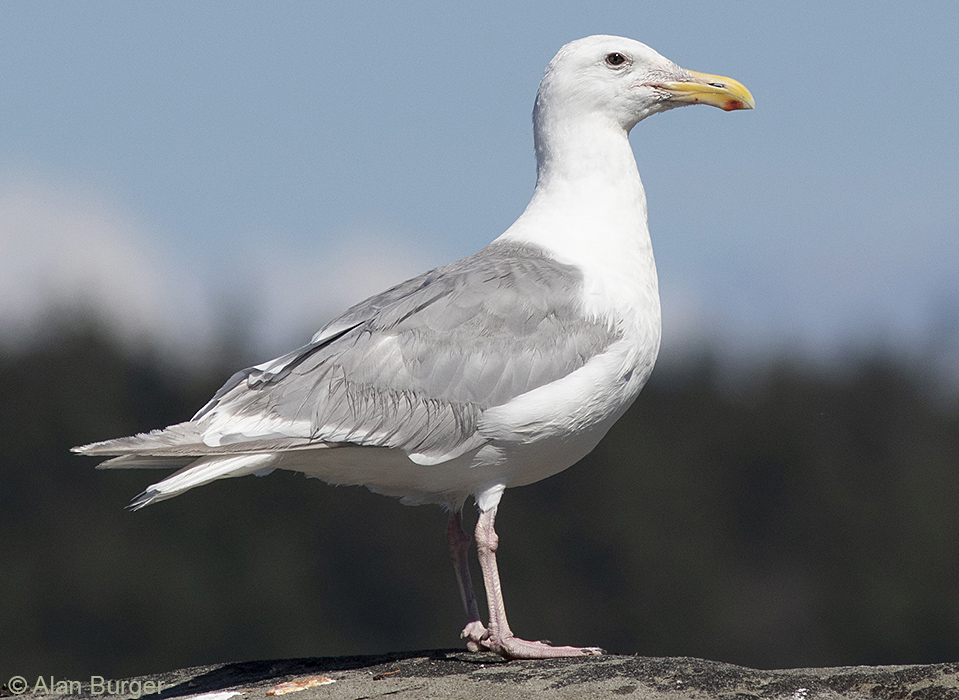 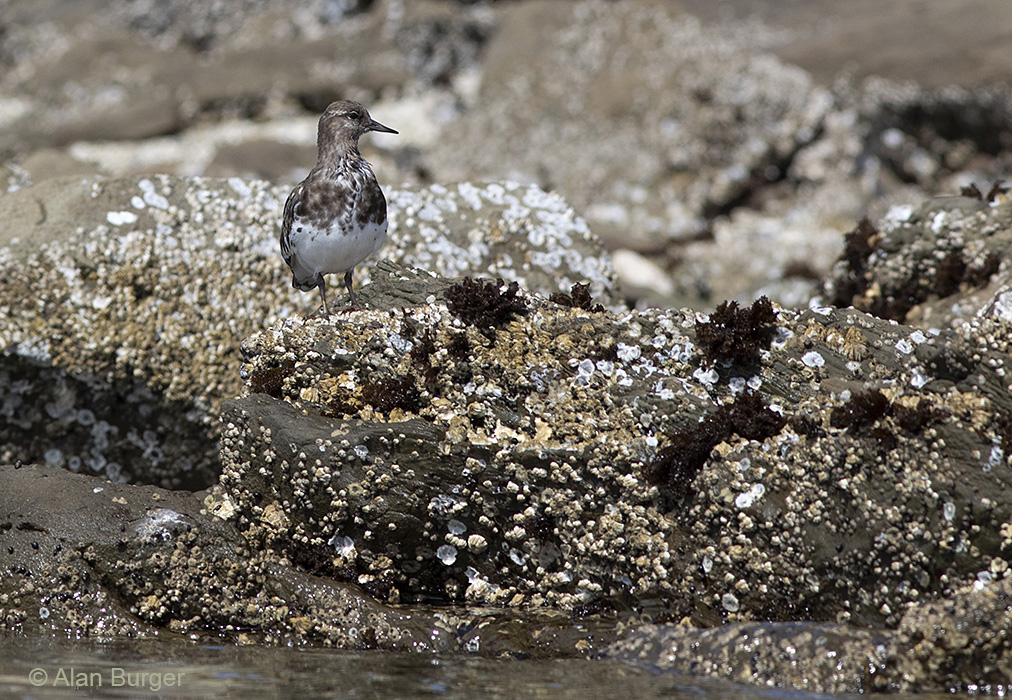 A Black Turnstone in its rocky intertidal habitat. We encountered several groups of 5-15 turnstones at various rocky points. © Alan Burger 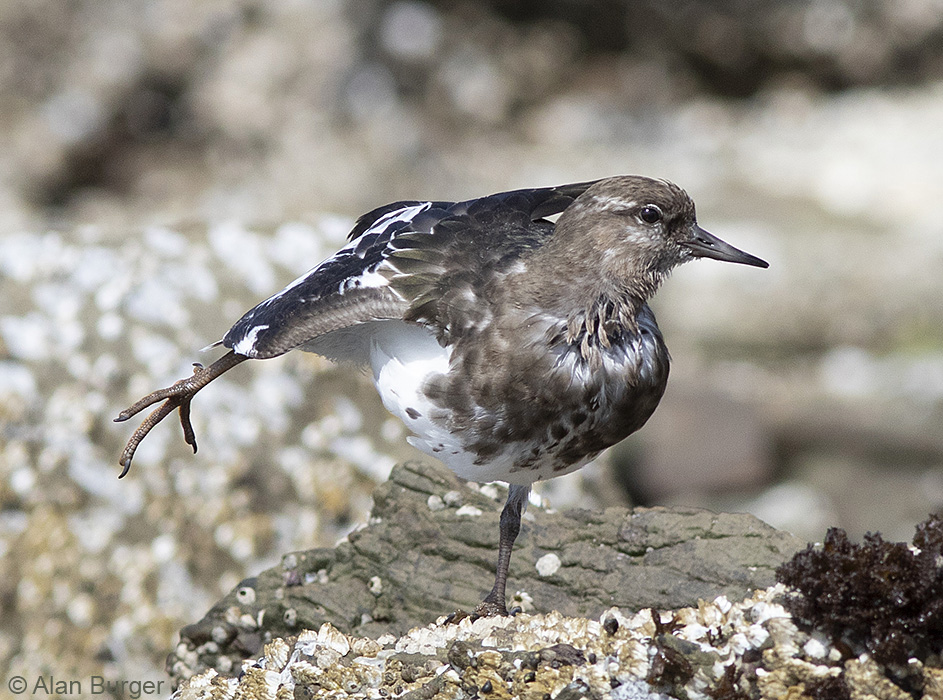 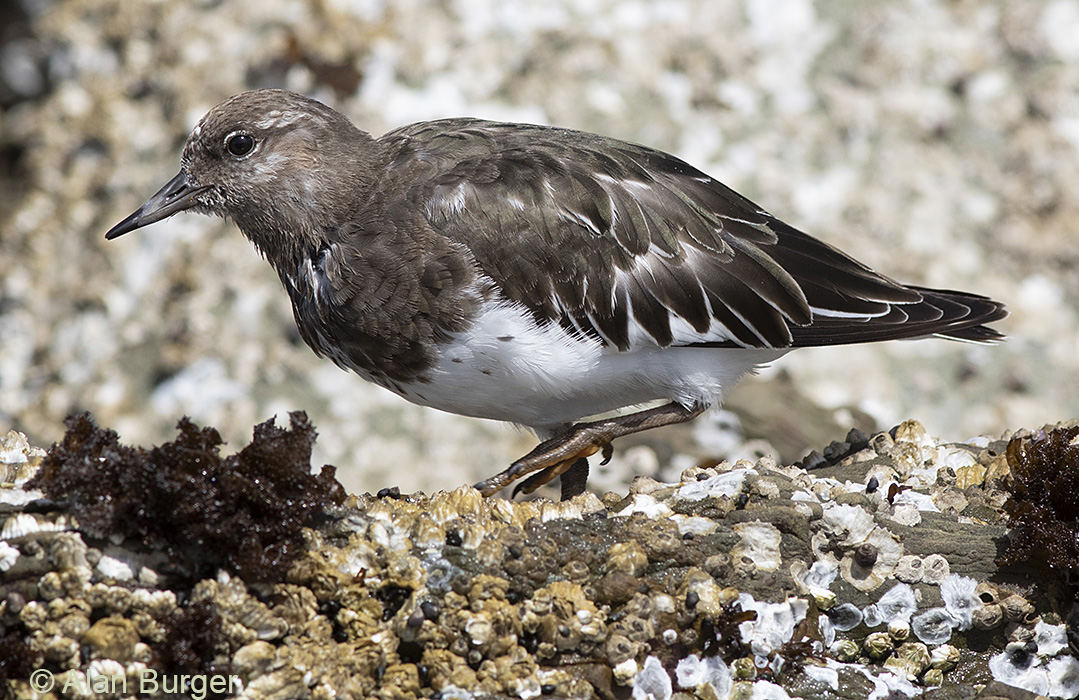 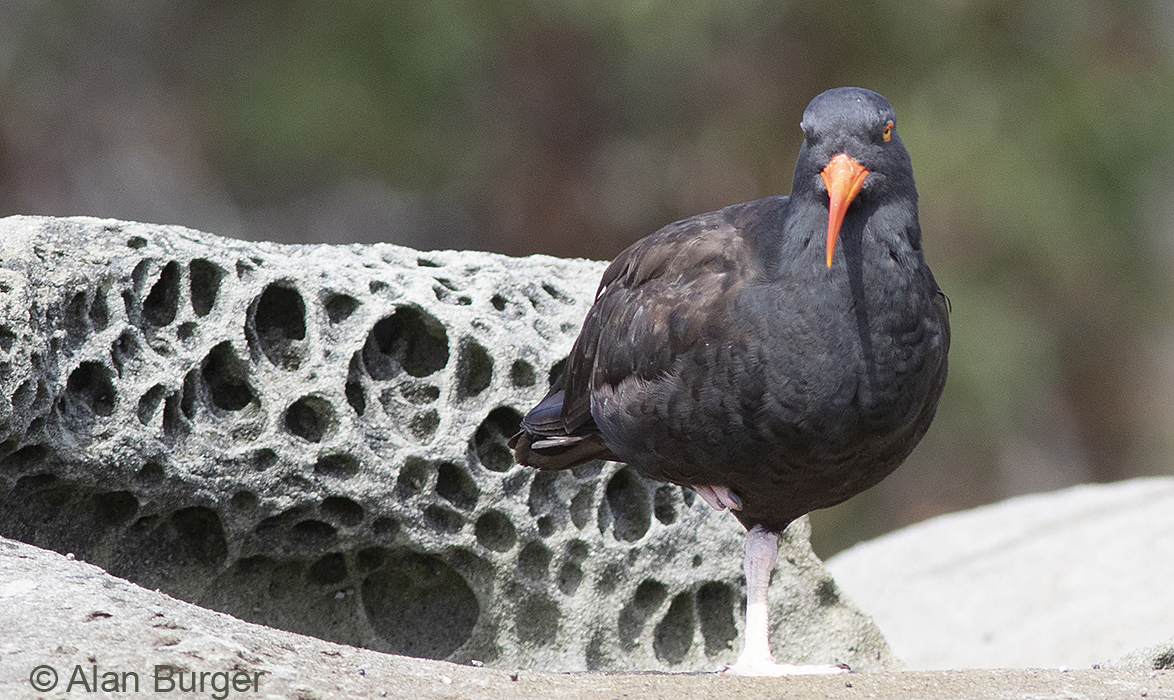 A Black Oystercatcher posing in front of a sandstone natural carving. © Alan Burger 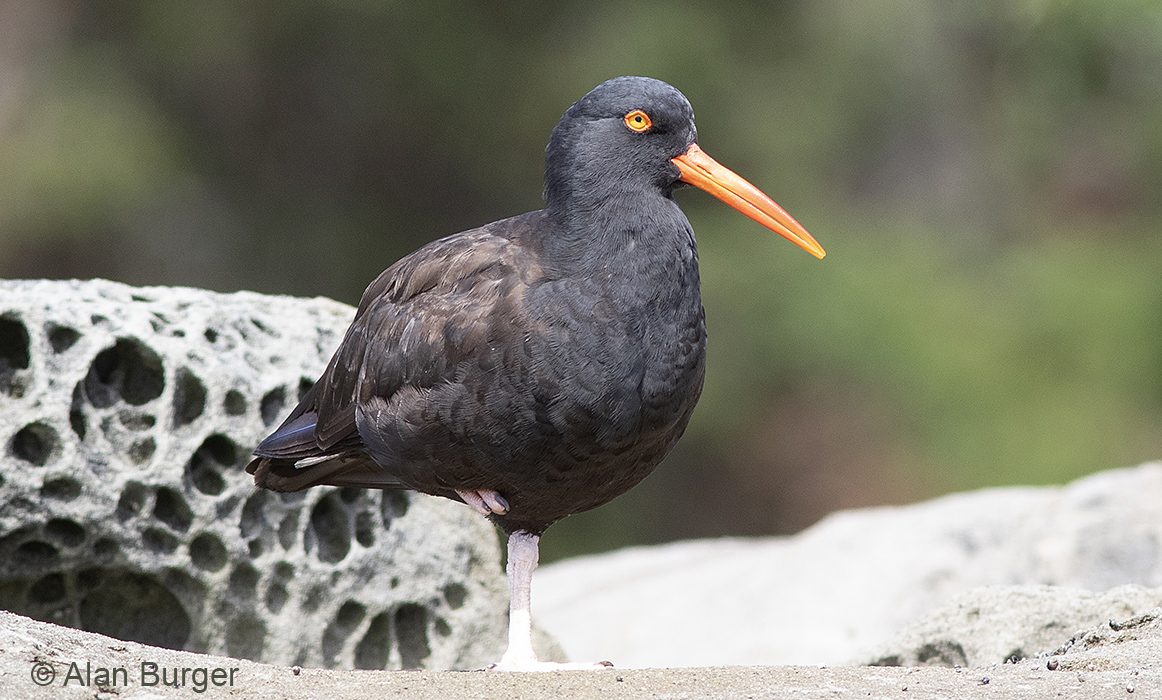 A close view of a Black Oystercatcher. Birds are wary of flashing paddles but if one drifts up slowly in a kayak there are opportunities for close photography without disturbing the birds. Notice how relaxed this bird is with one foot still tucked into the plumage. © Alan Burger

A lone Mink and numerous Harbour Seals were the only mammals to be seen ….. 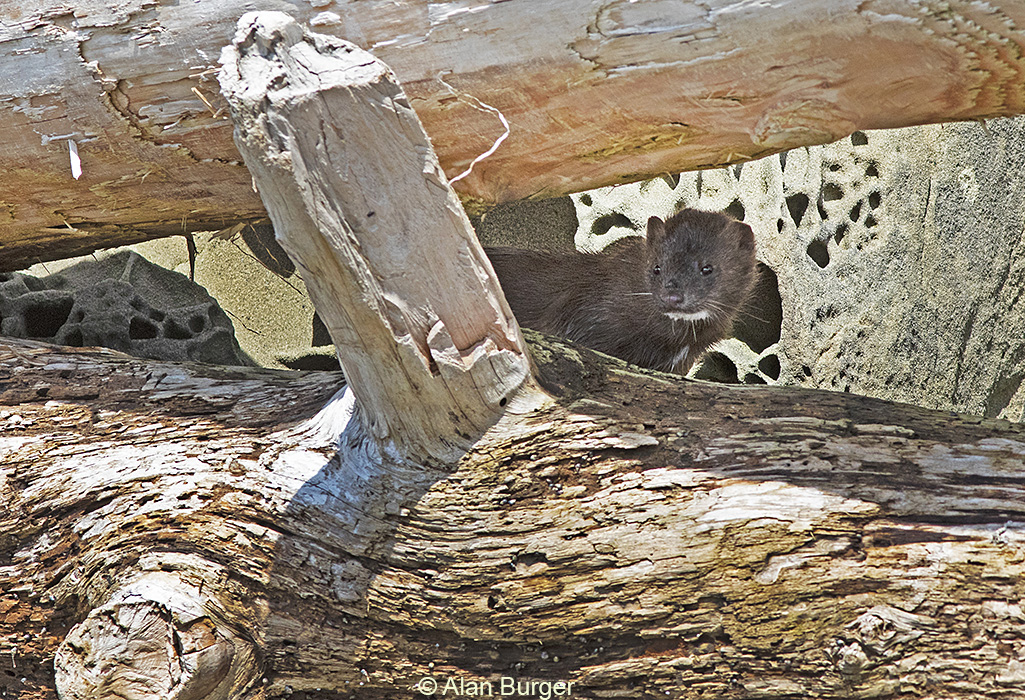 Wary but very curious – this Mink was scuttling among the rocks and logs along the shore but had to keep peeking out to watch us. © Alan Burger 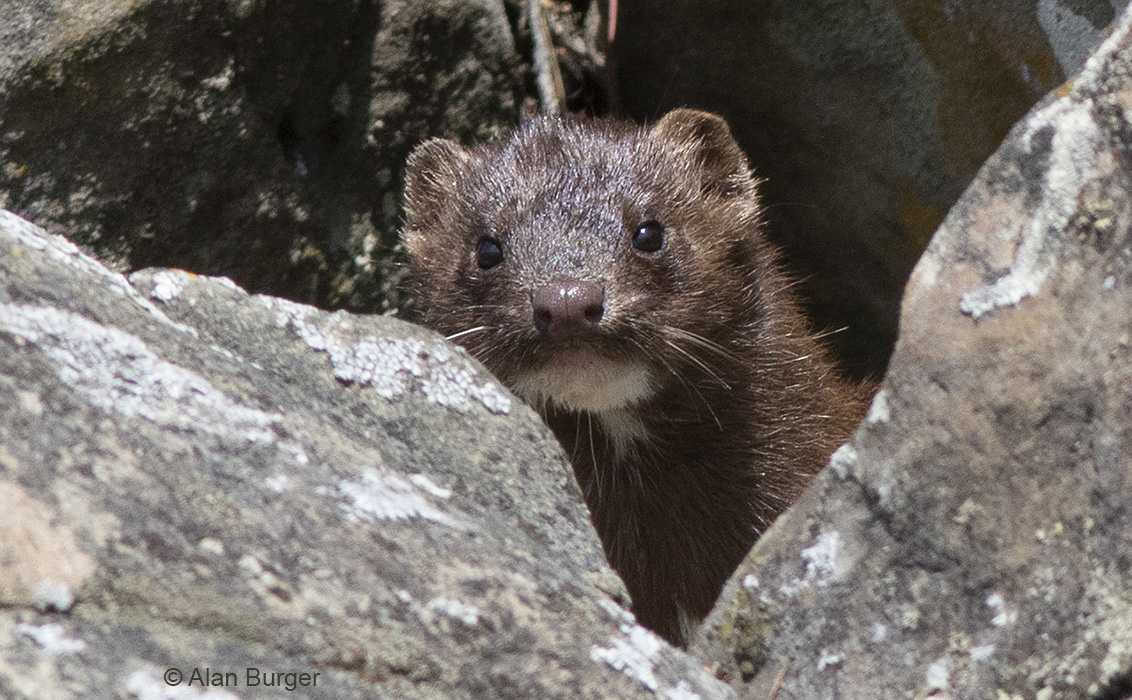 A closer view of the Mink among the intertidal boulders. © Alan Burger

Harbour Seals are common throughout most of the B.C. coast. Several of the groups we encountered included large pups. Harbour Seals in the Salish Sea give birth to pups in late July – early August, much later in the summer than those on the outer coast (J. K. B. Ford – Marine Mammals of British Columbia). Females raise a single pup each year and nurse the pups for 4-5 weeks. 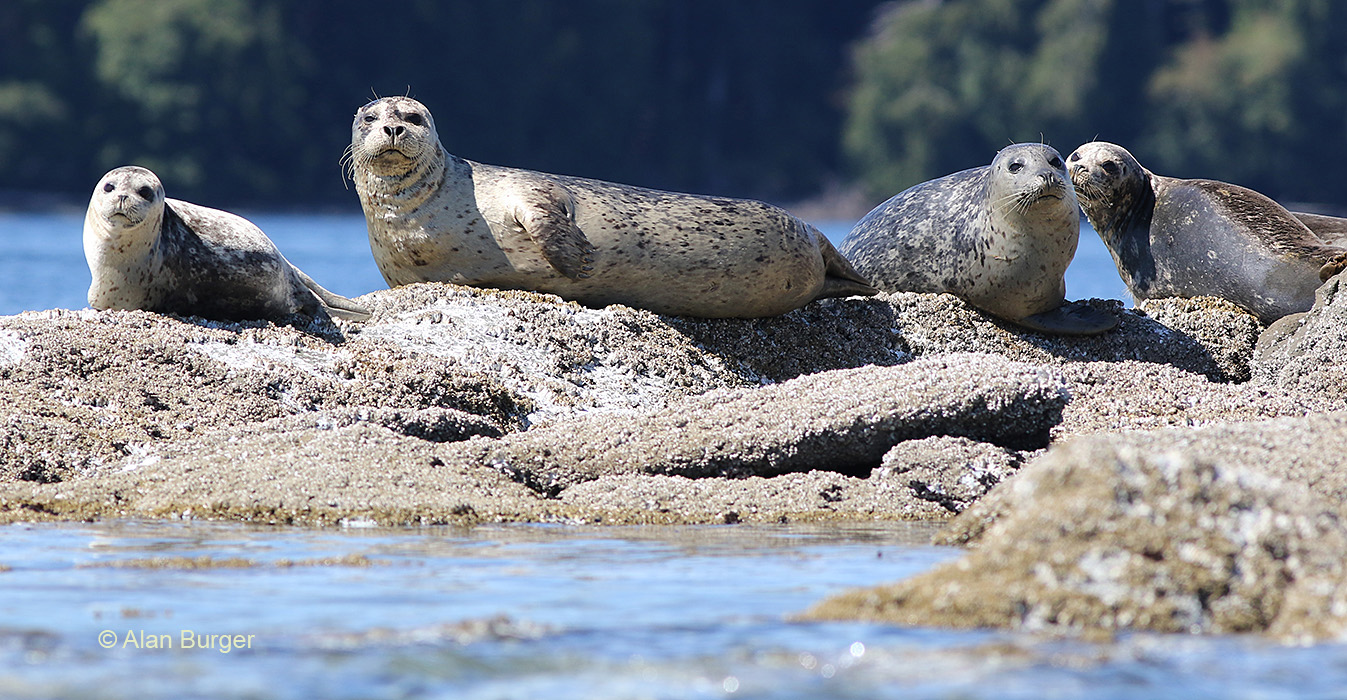 Harbour Seals – their coats vary a lot in colour and degree of blotching. © Alan Burger

Harbour Seals are very curious about kayaks and often follow behind us keeping low in the water. © Alan Burger 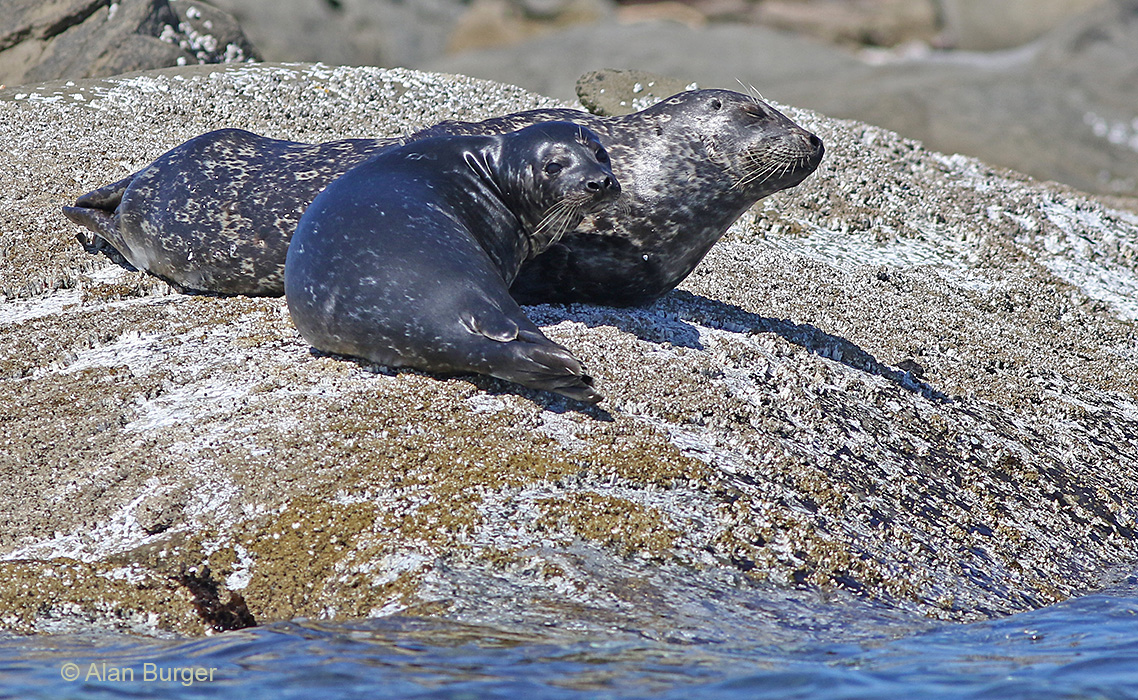 This pup appeared to be nursing as we approached. Photo: © Alan Burger 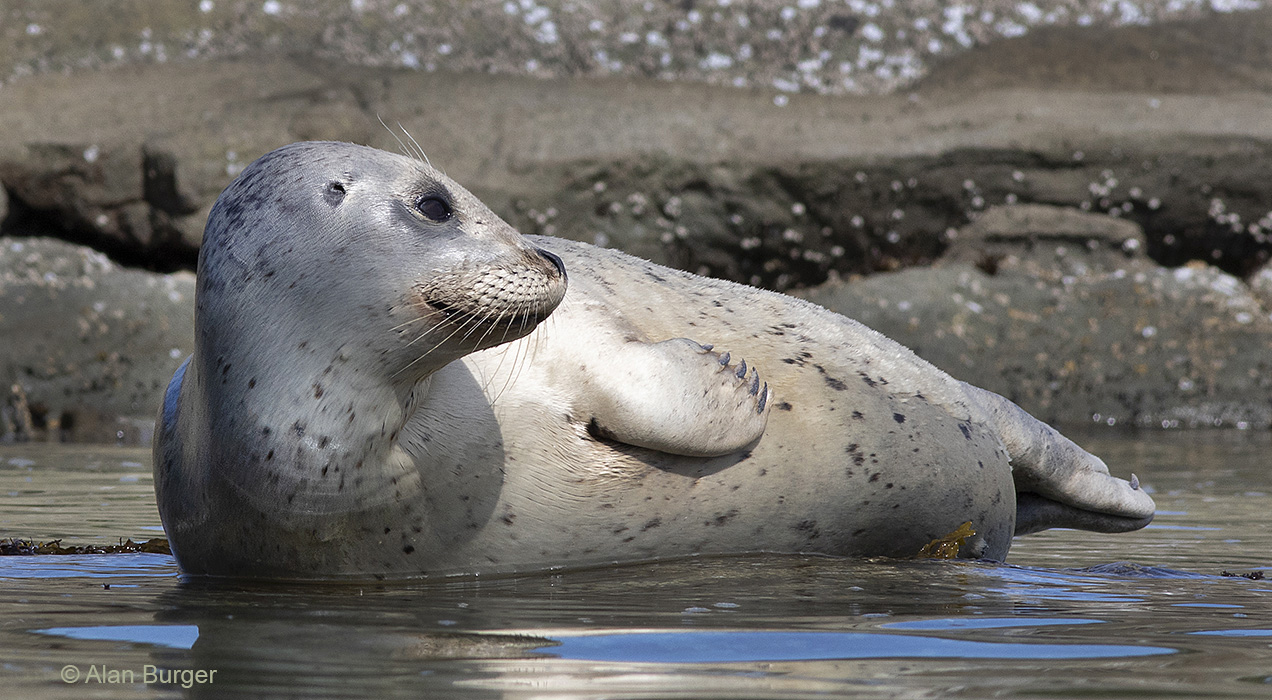